British supercar maker McLaren has finally unveiled the 675LT Spider. Strictly limited to only 500 examples worldwide, it is only the second model after the 675LT Coupe to wear the LT badge. The 675LT Coupe focused on light weight, enhanced aerodynamics, increased power and track-focused dynamics, and this limited-run model quickly sold out before the first deliveries commenced.

Sharing these key qualities, McLaren Automotive now exhibits the most engaged, speediest and invigorating open top model to ever wear a McLaren badge. The 675LT Spider, valued at £285,450, is the fifth new model appeared by McLaren Automotive in 2015 in what has turned into a characterizing year for the British brand. This most recent model joins the McLaren P1™ GTR, 570S Coupé and 540C Coupé, and the 675LT Coupé as new to the line-up, and further reinforces the Super Series. 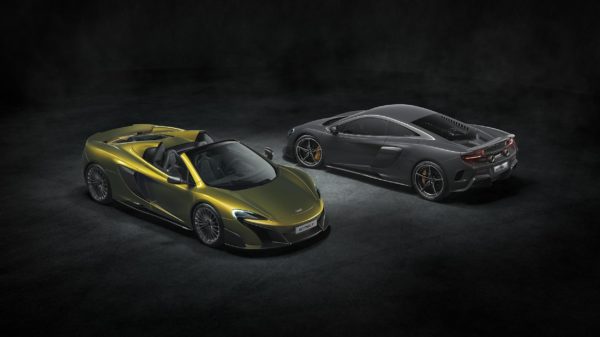 Under the skin of the 675LT Spider sits the intensely revised 3.8-liter twin turbo V8 powertrain from the Coupe sibling, ensuring performance figures are deserving of the LT – or “Longtail” – identification. The power output and torque figures stay unaltered, with 675PS (666bhp) conveyed at 7,100rpm and 700Nm (516lb ft) accessible between 5,000-6,500rpm. The progressions to the powertrain saw more than 50 percent of the segments supplanted to guarantee upgraded levels of power, torque and drivability. These incorporate new, more productive turbos, subtle element outline changes to the chamber heads and ventilation systems, new camshaft and lightweight associating bars, and a quicker streaming fuel pump and conveyance framework. 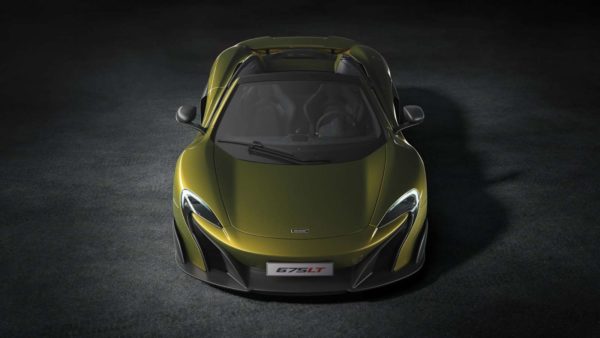 Increasing speed from 0-100kmh (0-62mph) takes only 2.9 seconds, and 200kmh (124mph) is accomplished in 8.1 seconds – giving endlessly just 0.2 seconds to the all the more efficiently streamlined and lighter car. Controlled torque conveyance in first rigging oversees torque to 600Nm (443lb ft) to guarantee most extreme speeding up, and minimizing wheel slip. Top rate is 326km/h (203mph). In spite of these rankling execution figures, the 675LT Spider returns 24.2mpg on the EU joined cycle, while CO2 outflows stay at 275g/km – the same as the roadster. A three-piece retractable collapsing hardtop can be opened at paces up to 30km/h (19mph) to take into account another level of outside thrill. 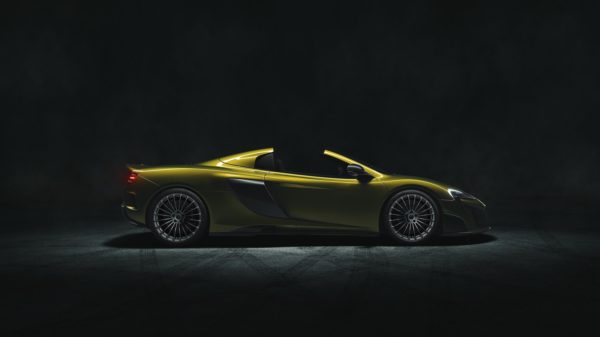 Staying consistent with the “Longtail” ethos, built up by the McLaren F1 in the late 1990s, the 675LT Spider has been created with an attention on light weight and streamlined execution. The exceptional way of the model is bolstered by the broad utilization of carbon fiber for the bodywork. Similarly as with the 675LT Coupé, the front guard with bigger splitter and end plates, front under body, side skirts, side admissions, lower side admissions, back bodyside lower, back bumpers, back deck, back guard, diffuser and “Longtail” Airbrake are all carbon fiber. Lightweight parts are likewise found all through the powertrain and skeleton, all adding to a dry weight of only 1,270kg. This weight is an entire 100kg lighter than the officially lightweight 650S Spider, and gives an energy to-weight figure of 532PS for every ton. Because of the inborn quality of the carbon fiber MonoCell undercarriage, no further fortifying – and related weight build – has been included through the evacuation of the rooftop, and the 675LT Spider is just 40kg heavier than the Coupé, all because of the retractable rooftop framework. 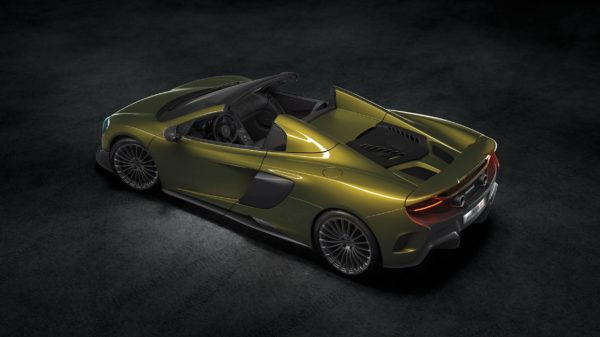 The sensational styling and intentional position of the 675LT is held with the Spider variation, with the expanded front splitter flanked by front wing end plates, every working the wind current harder and expanding downforce. Etched carbon fiber entryway ledges keep running along the lower edge of the bodywork, streaming into a littler air admission in front of the back wheels. This sits beneath the more claimed side admission, with both nourishing perfect, cool air into the side radiators which are more conspicuous to offer expanded cooling. The retractable hard top stows underneath a shading coded tonneau spread, and the motor stays unmistakable through a lightweight vented polycarbonate motor spread. At the back, the lightweight titanium hybrid twin depletes exit beneath the dynamic “Longtail” Airbrake which is 50 percent bigger than other Super Series models. This is coordinated into the outline of the streaming back wings and notwithstanding the bigger size, carbon fiber development guarantees weight is really lessened. Uncovered bodywork over the back deck and underneath the back wing helps motor cooling, while louvers in the flared back guard enhance weight levels.

The 675LT Spider shares the suspension set up and geometry of the Coupé, with the front end sitting on new lightweight springs and a more extensive track – expanded by 20mm. Spring rates are the most track-centered of the Super Series models, with firmness expanded 27 percent at the front and 63 percent at the back, giving an all the more rearward adjust and taking into account a 40 percent expansion in downforce over the 650S Spider. 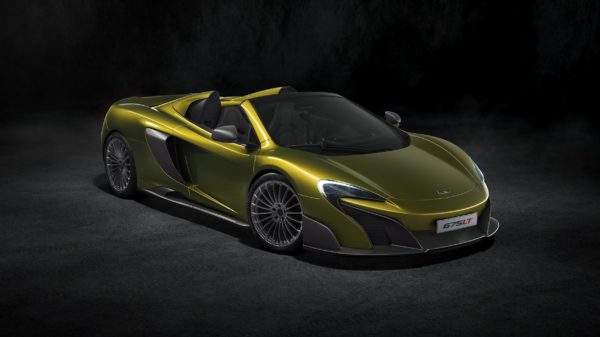 As standard, the 675LT Spider is fitted with 10-spoke Ultra-Lightweight produced amalgam wheels – 19-inch at the front, 20-inch at the back – and P Zero™ Trofeo R tires, created for the 675LT models as a team with specialized accomplice Pirelli. These are the lightest haggle set ever offered by McLaren. Two Super-Lightweight wheel choices are alternatively accessible; another 20-talked outline, offered in fluid metal or precious stone cut completions, and the five-spoke Super-Lightweight configuration which appeared on the Coupé.

The lightweight subject proceeds all through the inside with Alcantara® and uncovered carbon fiber utilized broadly. A couple of lightweight carbon fiber-shelled dashing seats, demonstrated on those fitted to the McLaren P1™, spare a consolidated 15kg, and highlight “675LT” embellished cowhide to give upgraded levels of bolster and hold. As found in the McLaren P1™ and 675LT, warming and ventilation controls are situated inside of the picture orientated, halfway mounted touchscreen, which additionally works the four-speaker Meridian sound framework, while cooling has been uprooted. The 16kg framework can be determined as a no-expense alternative.

The ‘By McLaren’ inside subjects were initially presented on the 675LT Coupé, and are again accessible for the Spider model. The reach is stretched out for the 675LT Spider, with the expansion of select Xenon Yellow complexity fasten. Simialrly, the full outside paint palette offered on the 675LT Coupé is accessible for the Spider model, which incorporates the new Silica White, Delta Red, Napier Green and Chicane Gray paint wraps up. Moreover, the recently grew profound brilliant shading, Solis – which gets its name from the Latin for sun – is a bespoke shading just accessible on the open-main 675LT Spider.

Further upgrades can be made through the Club Sport Professional Pack, which includes further visual carbon fiber and stealth enumerating. Accessible in Titanium Silver, Storm Gray, Onyx Black and Chicane Gray, the Ultra-Lightweight wheels are stealth completed, while a glossy silk carbon fiber completion is connected to the front wing end plates, lower side air admission and the focal point of the back guard, alongside the side admissions, wheelarches, wing mirrors and “Longtail” Airbrake. McLaren Orange enumerating is then connected both remotely and inside, with brake calipers, decorated cowhide and sewing all in the legacy shading made acclaimed by the Formula 1™ and Can-Am racers of Bruce McLaren,

While holding a great part of the track-center and capacity of the Coupé, the Club Sport Pack – involving titanium rollhoop, four point tackles and fire douser – is not accessible as a possibility for the 675LT Spider.

Another key normal for any Longtail is eliteness, and the 675LT Spider is no exemption. Similarly as with the Coupé, generation of the 675LT Spider will be entirely restricted to just 500 units.