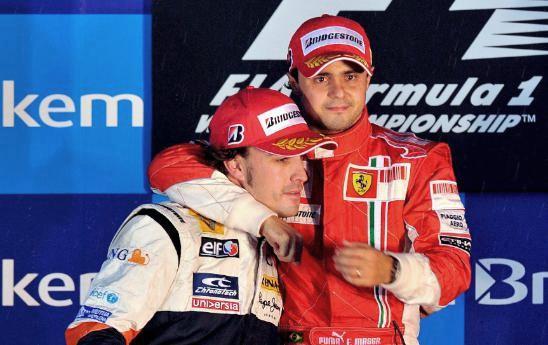 Just a couple of days after Alonso confirmed his switch to Ferrari; he already has a miffed team-mate. Felipe Massa has blamed Alonso for losing out the 2008 driver’s championship to Hamilton. Alonso won last year’s Singapore GP because of Piquet’s deliberate crash, which brought on the safety car messing up Felipe’s pit-stop strategy and resulting in him getting relegated to the back of the field.

Massa suggested that Alonso should have been disqualified after the scandal came to light. A furious Massa commented, “All of what happened was robbery – but regarding the race nothing has happened, the result remains the same. The robbery changed the outcome of a championship and I lost. This is not right, In Italy; Juventus (An Italian football team) were relegated. But here they just sent Briatore home. I don’t get it and I don’t think it was right.”