Britain’s fastest snowboarder Jamie Barrow has broken his own Guinness World Record, clocking a new fastest speed on a snowboard while being towed by Maserati Levante SUV on the frozen lakes of St Moritz.

Barrow previously broke the same record in February 2016, when he was clocked at a speed of 99.87 km/h while being towed behind a car across the same frozen lake in St Moritz. Despite breaking the record in 2016, Barrow was always confident that an even greater speed was possible, due to the track in 2016 being slightly shorter than originally planned and the soft snow not allowing the grip needed. 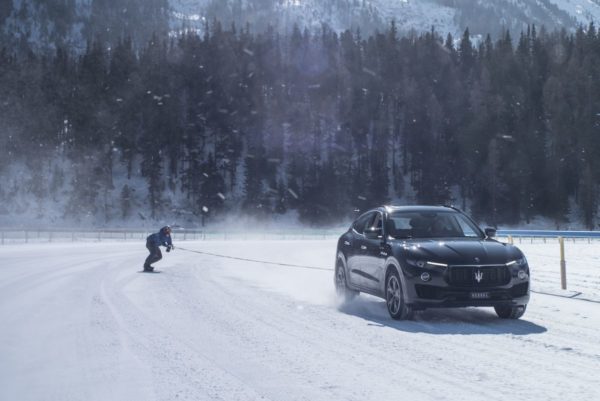 This time he returned to the lake with the Maserati Levante SUV, fitted with Pirelli Scorpion Winter tyres. The special studded tyres have 474 studs per tyre and are 4 mm long to allow the best grip possible on the frozen lake.

Speaking about his newly set Guinness World Record, Barrow said that the Maserati Levante made light work of the icy and snowy conditions, giving the grip to really hit top speed. The adrenaline rush is always amazing when you hit those speeds.