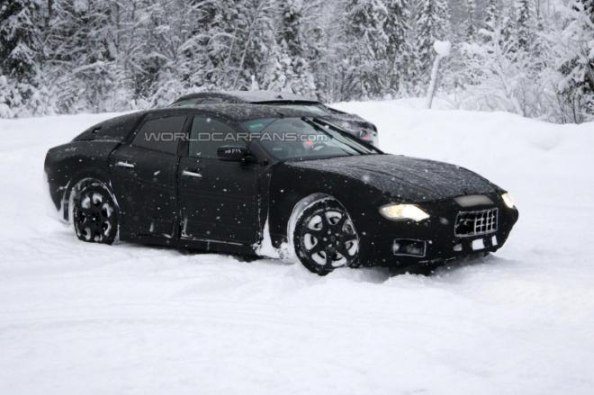 What we have here are the first ever spy shots of the baby Quattroporte. To be christened as the Maserati Ghibli, the car is one of the two new cars that the Italian manufacturer plans to launch in near future. The other car will be a new crossover called Levante.

The Ghibli, which was recently caught in Sweden, was dressed in the old Quattroporte’s clothing. However, it can be found on closer inspection that the car caught is shorter than the old flagship. The Maserati Ghibli has been codenamed as the “M157” and could be underpinned by the Chrysler 300 chassis.

Powering the baby Quattroporte would be a turbocharged Pentastar 3.5-liter V6 unit with a power output of close to 400 hp. Also on offer would be the Ferrari-made V8 engine that does duty in the new Quattroporte. The Ferrari motor produces 523 hp. Both these engine will be mated to an 8-speed transmission from ZF.

The Maserati Ghibli will be revealed in late 2013.