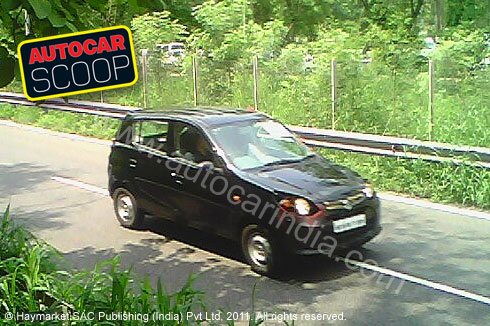 So the Nano may currently be the cheapest car in the Indian market, but Maruti Suzuki, the largest carmaker in India, and the undisputed king of the small car market is not resting on its laurels. The Indo-Japanese car maker is working towards developing an evolved version of its original people’s car, the 800. The new car will be positioned below the Alto, which is currently the cheapest offering from Maruti, and retail for a price tag of less than Rs 2 lakh. The new car would roughly be around Rs 40k cheaper than the Alto.

Autocar India, the leading auto magazine of India has the inside story on the new car, along with an exclusive spy picture which has been put here, along with due credits. Although the new car will be positioned below the Alto, it will share its platform with it. The new car will be propelled by the same 796cc, extremely fuel efficient power plant which powers the Alto, and has made it such an enormous success. The new engine will be slightly tweaked to meet the new emission norms. Alto’s 796cc engine produces 47PS @6200rpm and peak torque rate at 62Nm @3000rpm.

The new 800cc machine will sport entirely new interiors,, with more space to boast than the earlier 800. The new 800 from Maruti would be a straight competitor to the Nano, which has been very silently selling in decent numbers and taking away some sales from the Alto.

It’s prudent on Maruti’s part to develop such a sub-Alto car in the wake of the Nao’s slow but steady rise. Hyundai’s upcoming sub-Santro HA would also be another car which the Alto would have found to contend with all alone. The new 800 should give the company another weapon to counter the increasing threat from the upcoming ultra low cost cars.

Before the 800 was taken off the shelves, the sales had dwindled quite a bit. The Alto had already surpassed it as the largest selling car in india, and by an enormous margin. So does a relaunch of the 800 brand make sense to you? Do let us know why, or why not.

You can also discuss this topic in our Talks section.