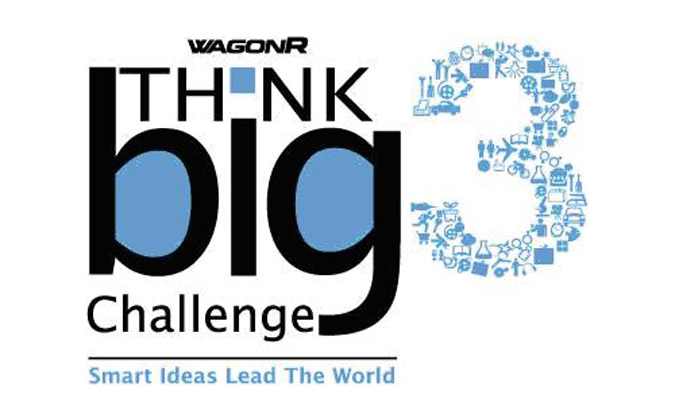 Maruti Suzuki India Limited, India’s largest car manufacturer, announced the winner of its hugely contested WagonR Think Big Challenge Season 3 today. Varun Chandra from Guwahati won the coveted title with his Big idea of a Voice Biometrics Platform. Mr R Madhavan, noted film actor and Mr Manohar Bhatt, VP, (Marketing), Maruti Suzuki India Limited were present at the ceremony to felicitate the winners. The winner was awarded a cash prize of Rs. 10 lakh, a brand new WagonR and an opportunity to win venture capital. In addition to this, the winning idea will also get an incubation worth Rs. 50 lakh  for a year

The winner was selected by an eminent panel of judges which comprised of Shailesh Vickram Singh, Executive Director, Seed Fund Advisors; Arvind Jha, Director & Co-founder, Movico Technologies (P) Ltd / Director, LAVA International (P) Ltd and Abhik Ghosh- CEO & Co-founder of AG Knowledgetech. Maruti Suzuki will provide “incubation support” worth Rs. 50 lakh to the winner for one year. During this incubation period, the support given will include monetary and infrastructural funding that would help to determine the feasibility of the business in the long run.

Speaking on the occasion, Mr. Manohar Bhatt, Vice President (Marketing) Maruti Suzuki said, “The 3rd season of WagonR Think Big Challenge has brought in more objectivity and greater focus towards the participants from specific target groups. Our previous two seasons were huge successes and this year too, we are overjoyed at the tremendous response shown by the eager participants. To encourage entrepreneurship among college students we specifically added a new category-‘The Young Turks’ this year. WagonR Think Big Challenge is an ultimate test of a business idea, passion, leadership and smartness that provides a platform to “Smart” young Indians who can show the way and become an inspiration to others much like the brand WagonR’s core value.”

The contest which started in April and spanned across four months tested not just the ingenious business ideas submitted by thousands of hopefuls but also the entrepreneurial acumen & mettle possessed by these contestants that is required to execute a successful business venture.

The contest saw an extensive range of business ideas from all across the country. Season 3 of WagonR think Big Challenge received a total of 36, 318 registrations this year. The total number of complete ideas registered was 2,385. The participants underwent rigorous training sessions and interactions under the mentorship of industry stalwarts. Taking cues from last two successive seasons of WagonR Think BIG Challenge, the contest this year introduced a new category, namely, the “Young Turks” which catered exclusively to young college students. The grand finale of the same was held last week in New Delhi.