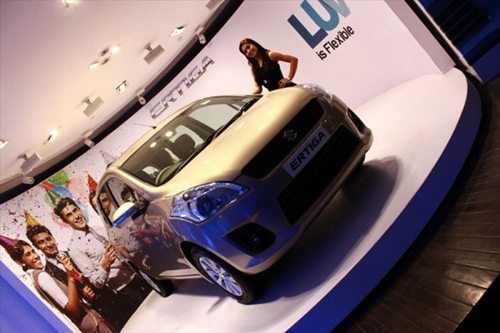 The Ertiga MPV has to be among the best things to have happened to Maruti Suzuki India Ltd (MSIL), the nation’s largest selling car maker in recent times. The Ertiga is on sale in the Indian market with two engine variants- a1.4 litre K series petrol and a 1.3 litre Fiat sourced Multijet diesel engine. It has now emerged that Maruti Suzuki is close to adding a CNG variant to its best selling MPV’s line up.

The Maruti Suzuki Ertiga CNG launch might happen before mid 2013 and the CNG kit will offered on the 1.4 litre K Series petrol engine. The 1.4 Liter K-Series petrol engine of the Ertiga has a max power output of 94 Bhp and a peak torque output of 130 Nm. Once equipped with the CNG kit, the petrol engined car would have low running costs that can be compared to that of the diesel variant. These low running costs would be the major selling point of the Ertiga CNG. CNG is not just cheaper than petrol but is also less harmful to the environment. However, thanks to lack of sufficient number of CNG filling stations, CNG cars haven’t really been popular in Indian car market.

No Of Gears- 5 Speed