In what is seen as an utterly irresponsible act, two people have been arrested in the UK for racing an Audi RS6 at a raging speed of 201 mph which is roughly 323 kmph. This act was carried out about three weeks ago and was filmed and uploaded on YouTube.

The video on YouTube showed the person driving his Audi RS6 one-handed down a road believed to be in West Sussex at break-neck speed, much higher than the speed limit on the stretch. The video went viral on social media which also helped police officials launch an investigation and subsequently nab the accused.

The stunt was apparently filmed on the M23, between Gatwick and Crawley in West Sussex. It showed the speedometer of a black Audi RS6, later seized by police, clocking the 201 mph mark. In the UK, the national speed limit is capped at 70mph (112 kmph) but the accused were racing their car at three times that restriction. The shocking part is that the driver used one hand for steering the car while he used the other hand to film the entire event.

The video shows the Audi RS6, with a power output of 550 bhp, picking up speed from 61mph to 116mph in a matter of just five seconds. It took him another 50 seconds to hit 201 mph (323 kmph) on the relatively empty stretch of the road. It is clear in the video that the driver also did not pay any heed to lane-keeping rules and makes the car weave in and out of the few other cars that were ahead of it.

It is also suspected that the accused must have tinkered with the internal speed limiter of the car as the Audi’s UK website pegs the car’s top speed at 155 mph. Even an optional Dynamic pack Plus would only take up the top speed to around 189 mph. The Audi RS6 Avant costs around 90,000 pounds in the UK (approximately ₹85 lakhs) and boasts of nearly 600 bhp of max power. 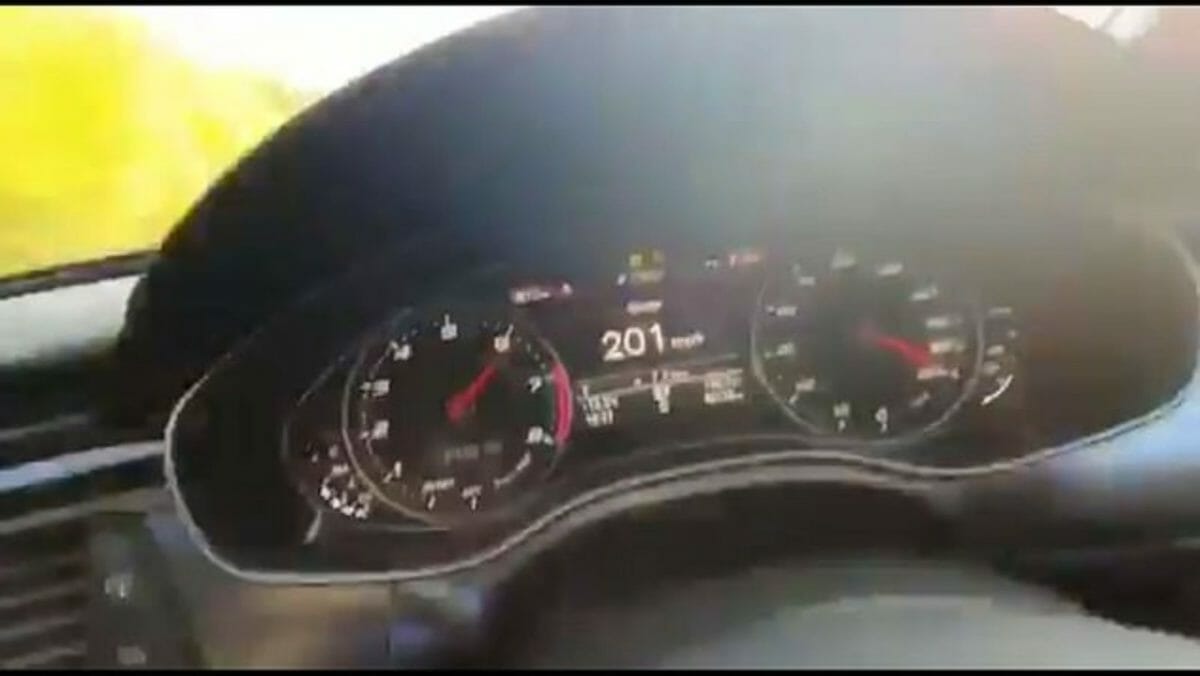 BBC reported that both accused,  from Crawley and Horsham, are 38 years old and while one of them was released, the other is now out on conditional bail till July 9. Sussex Police had launched the investigation after the footage was uploaded to the internet and shared widely online. Speeding has been one of the rising cases of traffic violations amid lockdown implemented across several countries and the main cause of ‘death on roads’ over several years. Drivers have been found on the wrong side of the law, especially in the US and UK, as they tried to take advantage of unusually empty roads during the lockdown.

Recently, a British man has received a jail term of 26 months after he was convicted in a reckless driving case which involved him speeding away from cops at 160 kmph with a baby on-board. A few days ago, Swedish auto manufacturer Volvo had announced that from now on all its vehicles, across all global markets, would have a maximum speed limit of 180 kmph in order to ensure the safety of people from excessive speeding of their car.