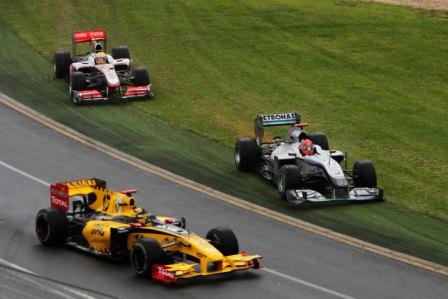 Back to back races are always an interesting affair and the last result is always playing on your mind as you get on to business at the next track. Renault in general and Kubica would surely have enjoyed the last weekend but I think both, the team and the driver know that a repeat of last Sunday would well nigh be possible. Unless of course, we are treated to some rain showers: F1 always brings about the unexpected in a wet-race.

Both Kubica and rookie Petrov have shown good pace in the first day practice sessions, having set the 6th and 10th fastest times respectively. It’s ofcourse a matter now of how well they fine-tune the car with respect to their competitors, because the cars are only going to get faster from here. Petrov has his work cut out; in that he has to really try and bring the car home. I think if he is able to do that, we should see him finish in a decent place. Kubica will, I am sure, be looking to a productive weekend where he brings in some serious points.

The Malaysian track itself might not be ideal for the R30; but the last races in Bahrain and Melbourne, which were considerably hotter than the European races have shown that the car is well-suited for high temperature races. So, unless we have an absolute rain-storm, the car should be managing the tyres and handling the heat of Malaysia quite nicely.

All in all, the Renault F1 team can already be happier since they outperformed their best result of last season already with Robert’s second place. I think the motivated bunch of people they are, the team is on it’s way to becoming a regular finisher in the points and I see a nice three way fight between Mercedes GP, Renault and the Force India cars. Although admittedly Mercedes GP so far has the upper hand, but the first two races have shown that you don’t necessarily need a faster car to finish higher up.

If Petrov starts performing consistently, we could very well see Renault fighting for P4 in the Constructors championship; which is exactly where they are right now. Although far from their winning ways, if the first two races are anything to go by, then the French team has taken a big step forward in the right direction. And one of those includes having Kubica, who in 2008 showed that he is capable of fighting for the World Title, as their biggest asset. We can only wait and watch but I think the Winds of Change have already started blowing their way!