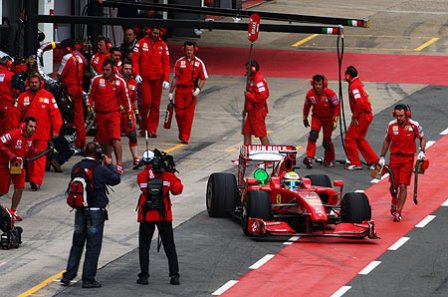 Ferrari has had a fabulous run at the Malaysian GP. Since the first race in 1999, the Prancing Horse has captured 7 Poles and 5 Wins.

The Italian marque may however find it difficult to continue dominating this track. They have been way off the pace in the Friday practice and have struggled with grip & pace right through the week. Their almost perfect start to the season may hit a Malaysian hurdle.

With inclement weather guaranteeing a wet and an eventful race, we are in for some great excitement. This along with the ambient temperatures reaching 34 degrees, will ensure that the drivers don’t have a walk in the park.

Alonso has been the better off the two Ferrari drivers. While he was just over a second off the pace in Practice 1, he finished 1.406 second down on the leader Lewis Hamilton in Practice 2.

While the practice sessions aren’t necessarily the indicator of race pace thanks to varying fuel loads, there were quite a few gloomy faces in the Ferrari paddock with Stefano Domenicali & the race engineers seen fretting over telemetry data.

Their website posts also mentioned, “There is a lot of work to do to prepare the race: we can foresee a very difficult weekend.”

Felipe Massa on the other hand too had a horrendous time with his car struggling continuously and being over 2 seconds off the pace.

While Alonso & Domenicali were upbeat about improving, with quotes like, “From our side, we are reasonably happy with what we have done and first impressions would be that there is no reason to expect a very different picture to the one we saw in Bahrain and Australia, partly because, in the space of four days, nothing much is likely to have changed,” the signs don’t look too promising.

The Ferraris off late have struggled to get their strategy right especially during changing weather in qualifying. It seems that there are too many heads involved in taking instinctive decisions that are needed in a constantly changing track conditions. As a result, in the last few years, after the departure of Ross Brawn we have seen the Ferrari team struggle to make the best of tricky qualifying sessions. The same seems to have hit the team in Malaysia with both the cars not making the cut to Q2 primarily due to a late qualifying run. The team anticipated a drying track for qualifying, but were shocked when they were only greeted with more rain. Lets hope they make the best of the changing weather conditions in the race atleast.

Red Bull & McLaren have made rapid strides and with the weather at its fickle best, Malaysia may just be the speed bump, Ferrari would have loved to avoid. I sincerely hope they are able to score points so that they keep the 2010 challenge alive.