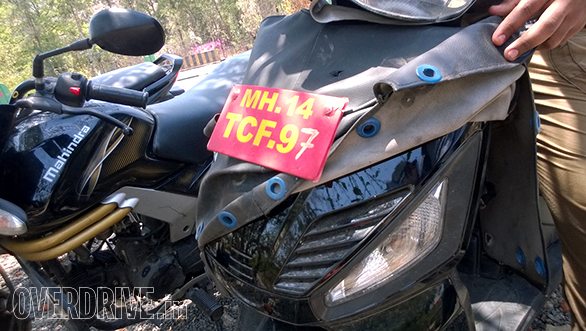 Mahindra 2 Wheelers’ upcoming 110cc scooter has been spied testing on the ghats near Lonavla by Overdrive. From what we can discern from the heavily cloaked images, it appears that the scooter will have a unisex design not much different from the Honda Activa and Jupiter Sport. The front apron sports trapezoidal clear lens turn signals with fake air scoops insipired by the Blaze scooter. Although the front wheel and suspension isn’t visible in the picture it is speculated that it will come with the telescopic front forks and MRF Nylogrip Zappers that has become de rigeur in this segment.

What is visible in the pictures is a completely new instrument console. There is a large semi-circular speedometer with integrated odometer. Just beneath it is a smaller analogue fuel gauge, and beside it are the tell-tale lights. The switchgear seems to be the same that we have encountered in the Rodeo and Duro scooters previously. 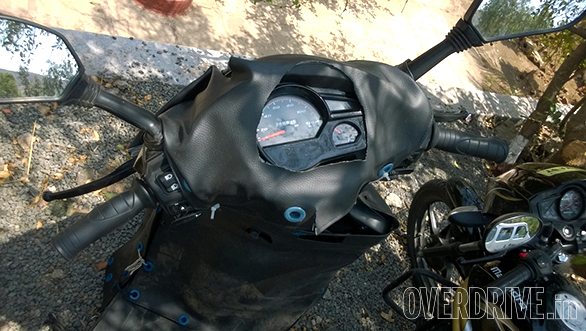 At the rear, the new Mahindra scooter employs a wraparound taillamp with integrated clear-lens turn signals on either side. There’s a high chance that motive power for this scooter will come from the 106.7cc mill of the Pantero/Centuro. In the Centuro, it produces around 8.5 PS of peak power, so we expect it to produce around 8 PS, when paired with the variomatic transmission. Fuel efficiency is expected to be around the 60 km/l mark.

Mahindra 2 Wheelers has no offering in the 110cc scooter market at present. Of its four scooters on sale, three of them, the Rodeo, Duro, and Flyte, are 125ccs while the fourth, Kine, is a puny 75cc. The company, however, is bullish on the Indian market, and is also gearing up to launch the Mojo 300cc naked bike soon.

View the latest pics and details of the Mahindra Mojo here. 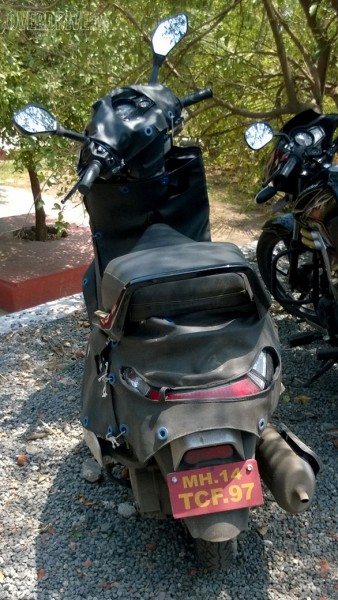