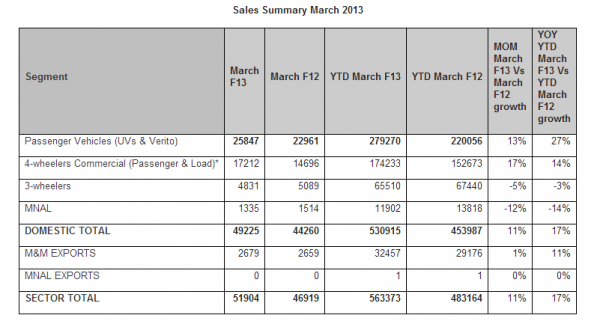 The 4 wheeler commercial segment which includes the passenger and load vehicles registered a sale of 17212 units, while the 3-wheelers segment clocked 4831 units in March 2013. Exports for the month of March 2013 stood at 2679 units.

Speaking on the performance, Pravin Shah, Chief Executive, Automotive Division, Mahindra & Mahindra Ltd. said, “We are happy to have crossed the half a million sales mark for the first time, during FY 2012-13, given the challenges and the pressures the auto industry is currently facing. The 3% additional excise duty on SUVs is clearly a deterrent and by not having a level playing field for all SUVs, it certainly destabilises the market dynamics. At Mahindra, we hope to create excitement in the market during FY 2013-14 especially with the launch of our sub 4 metre Verito and other product offerings”.