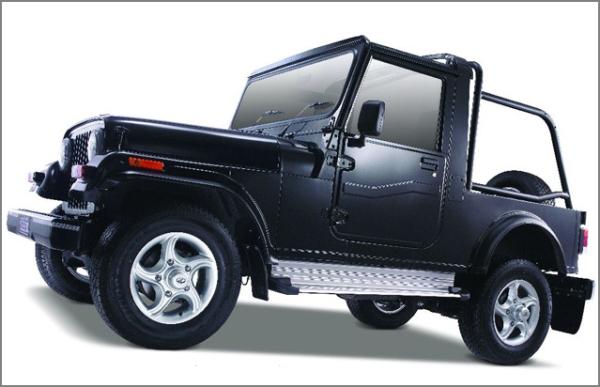 You can read about the power, specs and other details of this capable off-roader from Mahindra in the post below

Mahindra & Mahindra is going to launch the refurbished version of the Commander Jeep, namely Thar (named after the great Indian desert of Rajasthan) early next month. The Thar will be powered by a 2498cc (94x90mm) engine producing 105 horses @3800rpm and a peak torque of 247Nm at 1800-2000 rpm. The engine will be mated to a 5-speed manual tranny. The Thar being a hardcore off-roading device, will also feature Borg Warner transfer case with 2 Speed gear reduction ratios of – High 1.0:1 Low 2.48:1. The approach angle for the Thar is 46 degree and departure angle in 30 degrees, and along with a ground clearance of 200mm, the Thar looks like the perfect companion for those who love exploring the untrodden territory.

The Thar will most likely be available in four colours – white, silver, red and black. The car is currently exported to some European and South African countries. Stay tuned for more details as and when they emerge.