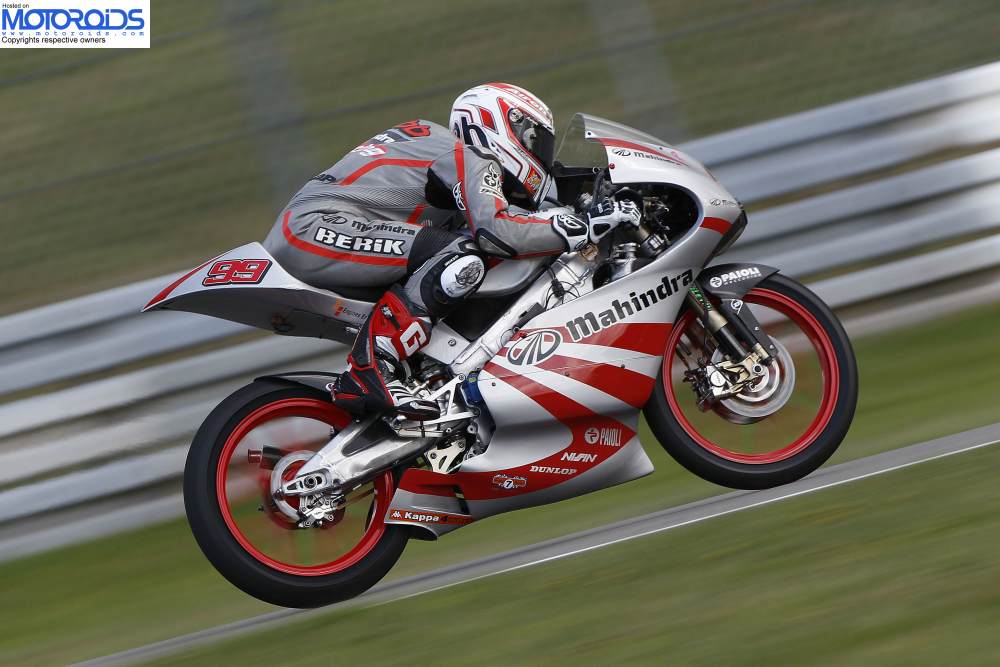 The Mahindra team has registered its best MotoGP result in the 125cc category. The team
achieved the feat at the Dutch TT on Sunday. Both riders from the Indian team finished in points in a race cut short by rain. Marcel Schrötter finished in ninth place, while Danny Webb managed a 13th place finish.

German Schrotter was still gaining places when the race finished, performing extremely well as the track got wet. Had the race been a lap longer, he would have been seventh. As it was, it was red-flagged on the 15th of 22 scheduled laps, with results taken from the end of lap 14.

This is the first time both riders have finished in the points in Mahindra’s first year in MotoGP 125cc Class. The Indian-owned team is the only one on the 36-strong grid to make its own engine and chassis.

Speaking from Mumbai, where the Mahindra Group is headquartered, a satisfied team principal Mufaddal Choonia said: “This is an extremely proud moment for all of us at Mahindra. We have broken into the top 10 in just our sixth race. And what makes it more special is that both Marcel and Danny finished in the points. We have been working very hard to improve our bike over the last couple of months and I am glad to say that all that effort is gradually bearing fruit.”

“I’m very happy with the progress, and with both riders,” added team manager Nicola Casadei. “Marcel has improved so much, and Danny was with him until he was forced out by another rider, and lost the slipstream.

“Also the bikes ran perfectly all weekend. Four or five races ago we were running around 20th. To have both bikes in the points is a good step towards our ultimate goal.

MARCEL SCHRÖTTER – Ninth Place
Danny and I both got a good start, but in the first three or four laps I made a couple of little mistakes and lost touch with the lead group. Then it started to rain a little, each lap a little bit more. I had a good feeling and I was closing up. I was trying to be fast but also safe: really concentrating. I gained some places, then I was behind two riders. I could have passed them for seventh, but I had no idea that the race would be stopped so I was waiting for a safe opportunity.

DANNY WEBB – 13th place
The race was hard but the end result not so bad. At the beginning Marcel and I were with the front group and feeling comfortable … but then another rider nearly hit me at the chicane and forced me to slow. After that I was stuck behind him: his bike was a little faster on the straight but he was slower in the corners, and the front guys got away. It was pretty frustrating – but the bike ran perfectly all weekend, and both me and Marcel were right up there. It’s proper progress.