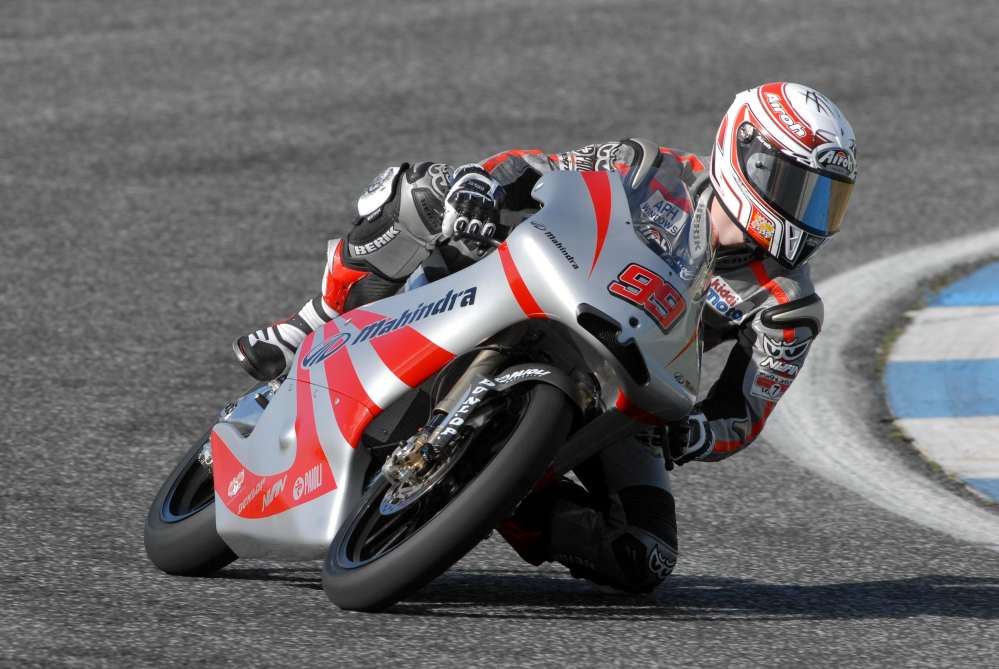 Mahindra rider Marcel Schrötter managed a hard fought 15 15th place at Misanoin MotoGP 125cc class. Team-mate Danny Webb finished 21st, dropping back after a strong start that saw him running in the top 15 with Schrötter in the early stages, only to be slowed as he struggled to match the pace of his team-mate.

Schrötter (18, from Germany) had qualified on the fifth row of the grid, and got a good start to maintain his position, and even move forward in the early laps. Conditions were hot and dry, and the pace remorseless, with few crashes or retirements.

As the race wore on, a couple of slips meant Marcel lost touch with the group, but he regained his rhythm and finished the race strongly … in spite of problems with numbness in his right (throttle) hand, and at the end with vision, as sweat ran into his eyes.

Webb (20, from England), already troubled with a left hand injury that ruled him out of the Indy GP last Sunday, ran with and sometimes ahead of the other silver-and-red Mahindra in the early laps. By half distance however, he had dropped to 20th, and lost one more place in the closing laps.

The San Marino and Rimini Riviera GP was the 12th of 17 rounds in the 125 World Championship. The next race is at Aragon in Spain in two weeks. Here are the quotes from the two riders of Mahindra Racing Team

A tough race, but at least we got in the points. I got a good start and in the first few laps I was able to catch the group in front of me. But riders were making mistakes which spread us out, then I had a near high-side at the hairpin that meant I lost touch. It was hard to get my rhythm again, and my hand was sleeping again mid-race – I had to try to move it when I could on the straight. In the last laps the sweat was running into my eyes and I couldn’t see well, but I made sure I kept my place in the points.

The first seven laps were pretty good – me and Marcel were well up. Then I started having problems with acceleration; I had a lot of near crashes, and I couldn’t push. Marcel is not having the same problem, so maybe it is my riding style: I am quite aggressive and he rides more smoothly. This has never been a good track for me. I’m looking forward to the next one.