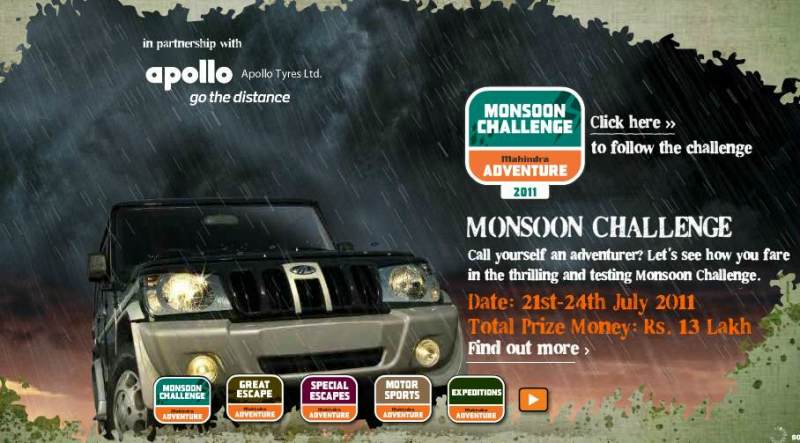 Mahindra Group has announced the launch of the Monsoon Challenge 2011 in association with Apollo Tyres. Monsoon Challenge 2011 will be one of the biggest TSD (time, speed, distance) rallies with the most rewarding prize money on offer. The event will have over 50 vehicles from the Mahindra stable manoeuvering the challenging route of 1500 kms in 3 days.

The Monsoon Challenge 2011 will be flagged off from Nashik and enroute the Mahindra vehicles will traverse the tarmac and dirt roads of Aurangabad, Kolhapur and finish off in Goa. Total prize money worth Rs. 13 lakh is on offer which is one of the highest amounts for any motorsport event in India. This event will be exclusively conducted for Mahindra owners and has been duly approved by the Federation of Motor Sports Clubs of India (FMSCI).

Speaking at the launch of the Monsoon Challenge 2011, Mr. Hemant Sikka, Senior Vice President – Manufacturing Operations, Automotive Division, Mahindra & Mahindra Ltd. said, “Monsoon Challenge promises to be one of the biggest TSD rallies in terms of the prize money on offer. Such TSD rallies will leverage the changing aspirations and lifestyles of the upwardly mobile Indians. The journey also aims to celebrate Incredible India as it passes through some of India’s most exotic locales . So here’s your chance to start your engine and get ready to get lost”.

According to Mr Satish Sharma, Chief, India Operations, Apollo Tyres, “With Mahindra, we are together working on multiple future projects and the Monsoon Challenge only adds to what we have already built so far. For utility vehicles like the ones participating at the Monsoon Challenge, Apollo has the entire Hawkz range of 4×4 tyres. For the Challenge, what will probably be used the most are the Hawkz AT or All Terrain and the Hawkz RT or Rough Terrain tyres.”

Mahindra Adventure will function as an umbrella brand with a series of adventure and motor sports events organised under its banner. Mahindra Adveture will unleash a series of events throughout the year such as the popular off-roading event, the Great Escape, several Challenges, which are sporting events in keeping with the company’s promise of providing adrenaline pumping challenges, Multi-Day Escapes, which include exciting thematic initiatives such as Vineyard Escape, Monastery Escape and Spice Escape planned to encompass the length & breadth of India and some Support Initiatives, such as Save the Yak, to take up various causes for the community. Mahindra Adventure will also enter official teams in some of India’s most popular motorsports events including Dakshin Dare, Raid de Himalaya and Desert Storm.