Home News Mahindra Mojo to be launched by 2014 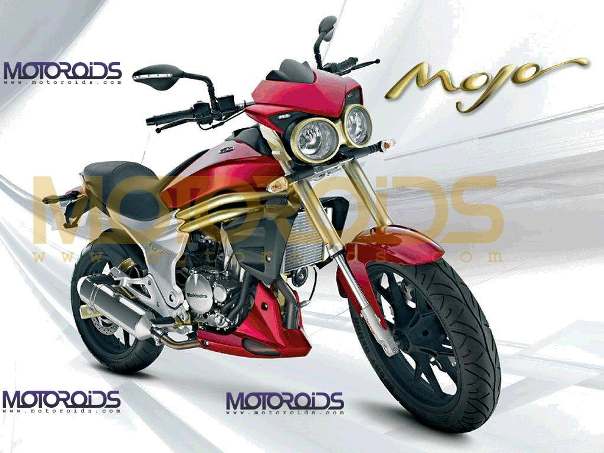 Indian bike enthusiasts will remember the excitement when Mahindra had unveiled the Mojo.

The Mojo’s engine specs are as follows:

– The Mojo 300 gets one of the best suspension elements in the business with inverted forks upfront which contribute towards lesser flex under braking and better riding dynamics. The rear suspension employs a gas-damped mono-shocker.

– The front brakes, like most superbikes, gets a set of radial mounted calipers.

The instrumentation console gets an analogue tachometer, tell tale lights for ECM malfunction, engine overheating, gear- shift indicator etc. and a digital read-out (with blue backlight) for the speedometer and fuel gauge.

– The Mojo 300 employs an exo- frame, meaning a tubular frame that extrudes around the body of the bike.

– The front blinker is integrated within the RVM, while the stout bikini fairing incorporates LED pilot lamps and the twin round headlights.

– Though the bike is a single cylinder, Engines Engineering has incorporated a dual exhaust system to give the Mojo more of a superbike kind of look, to appeal to the masses.

– The bike is shod with our favourite Pirelli Sport Demon medium compound tyres.

The bike was to be launched last year. However, owing to some major factors, the bike didn’t make it to the market. But the Mojo is not dead. It is being said that the bike will be launched as soon as in early 2014.