Going International requires a lot of courage especially in times like these. Though the auto industry seems to be recovering from the epidemic ‘recession’ , taking a big step now isnt considered great and playing safe is the only key to success. But if one gets success now too, then it should be considered a stepping stone for that brand.

Mahindra has done something similar. It is one of the few Indian companies to have made it to the international market and succesfully made themselves recoginzable among thousands of brands worldwide. Mahindra’s latest venture is to introduce their Scorpio Getaway based ‘Pik-Up’ to the States. While the trucks are all set to go, there seems to be some delay with the issuance of emission certificate by the authorities there.

According to John Perez, CEO of Global Vehicles USA, Mahindra’s distributor in U.S, the emissions tests have been carried on the trucks and the report is being submitted to the EPA for final approval. Approval will take another 30 days and then the import will take another 30. More than 300 dealers have been appointed and they will start functioning as soon as Mahindra gets a green signal. 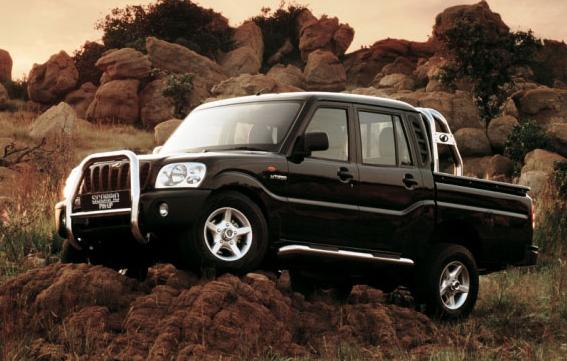 There will be two versions of the pick up trucks- two door TR20 and four door crew cab TR40.

There will only be one engine option available, a slightly uptuned version of the 2.2L mHawk engine, which currently powers the Scorpio, Xylo and the Getaway here in India. Fuel economy is said to be around 30 mpg on the highway while they have a 1.3 ton load lugging capacity. Prices will start at around $22k.

With domestic players venturing out in global market and international players coming in India to set up their manufacturing plants, India will surely be able to stand neck to neck with other major players.