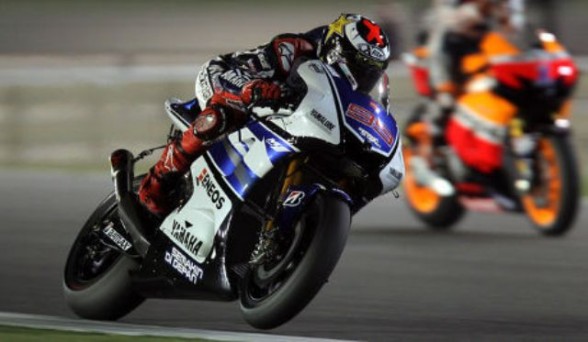 Jorge Lorenzo has started this season of MotoGP on a good note by getting himself a P1 at the season-opener in Qatar. The race was seen largely dominated by current World Champ Casey Stoner until Lorenzo’s aggressive moves saw Stoner losing the pole position to him towards the end of the race. Sometime after Stoner was out paced by Lorenzo, the Honda racer was pushed back even further to third place by Pedrosa. Pedrosa had overtaken Lorenzo before the Yamaha rider had shot past Stoner but Lorenzo was soon seen overtaking both the riders without much of a dogfight.Meanwhile, The Doctor and his Ducati was seen out of form and struggling at 10th place. Yamaha rider Ben Spies finished the race on the tail of Rossi at 11th place.