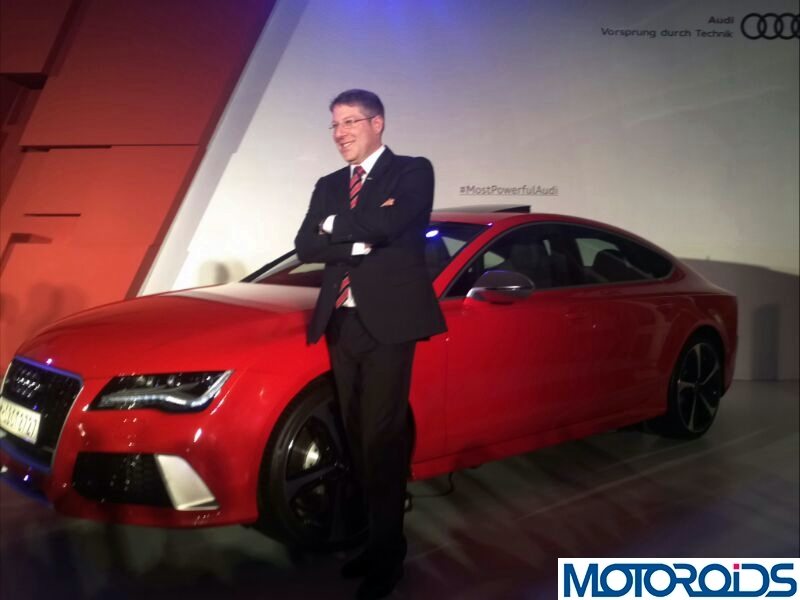 We are reporting LIVE from Audi RS7 India launch event and will be taking you through the proceedings of the event on this LIVE thread.

The new Audi RS7 is the first car launch in India this year. (Click here to read about all the 40 odd cars that are headed to us in 2014)

We are happy about the fact that Audi India is taking our car market very seriously and has been quick with bringing the RS7 to us. The RS7 made its public debut exactly a year ago at the 2013 Detroit Motor Show and is basically the hi-performance variant of the highly successful fast back sedan. 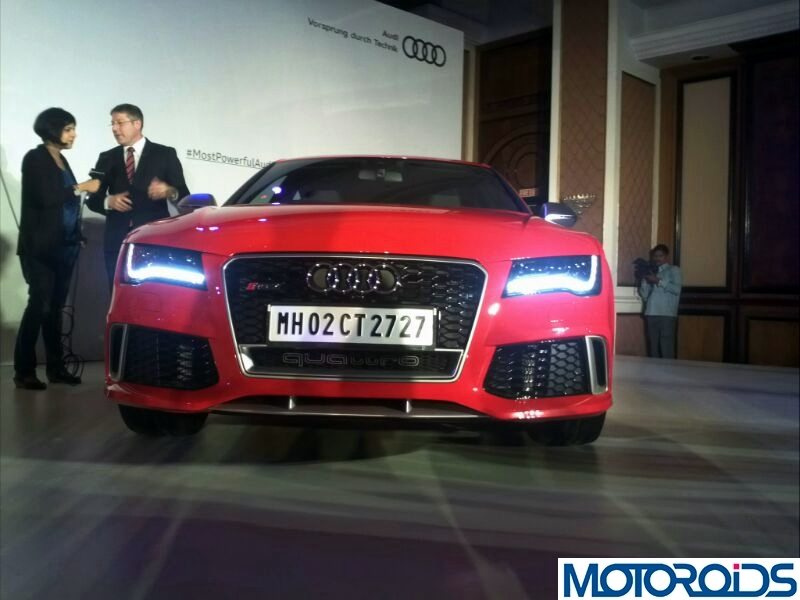 The Audi RS7 boasts of a host of visual enhancement that help you with differentiating it from the regular model (if we may dare to use words like regular for A7) to be ‘vanilla’). The RS7 boasts of bigger air intakes, a honeycomb grille, faux aluminium mirror housings and twin oval exhaust tips, all of which are sufficient to differentiate it from the ‘lesser’ variants. Also helping with the differentiation are the tastier 20-inch mag wheels. Optional extras on theRS7 21 inch wheels, large Quattro lettering on the front grille, modified front splitter and rear diffuser. 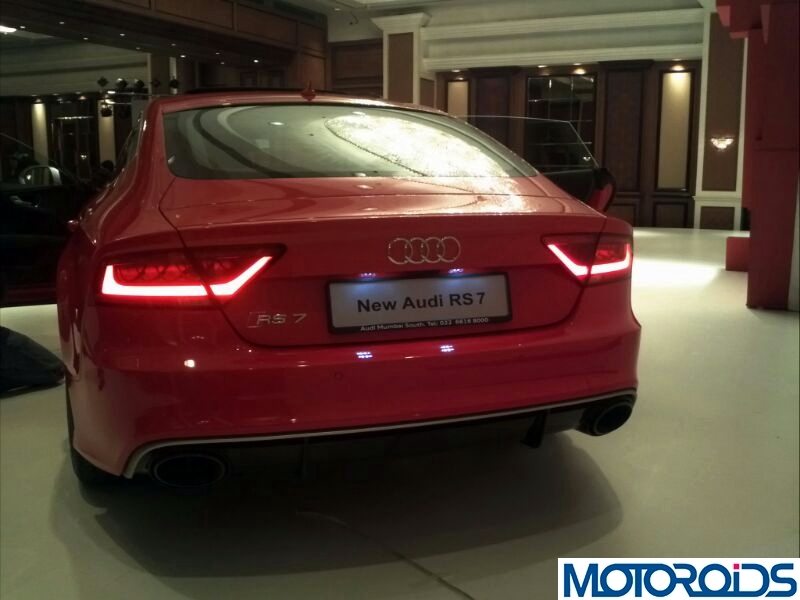 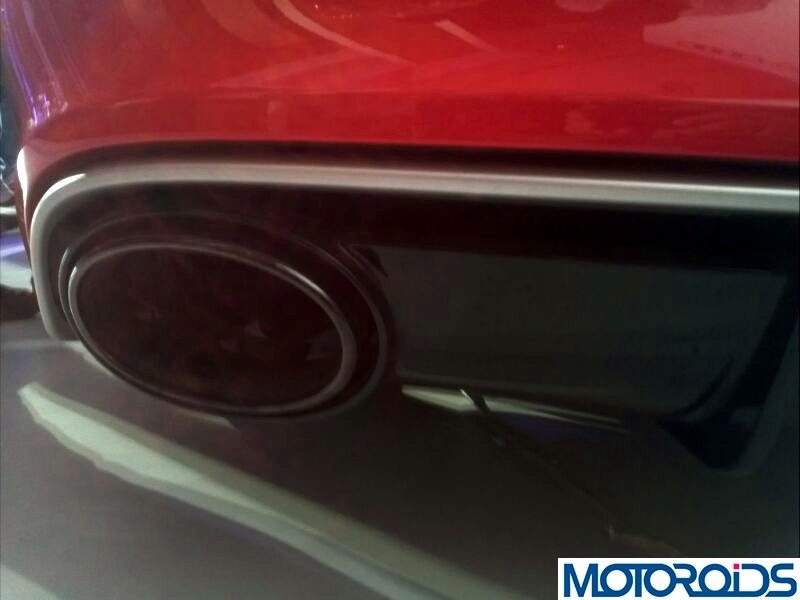 On the inside, the car comes kitted out with a flat-bottomed steering wheel, a color display that shows data like oil temperature, boost pressure and a digital shift light and a new speedo, which is calliberated till 200mph (320 kmph) 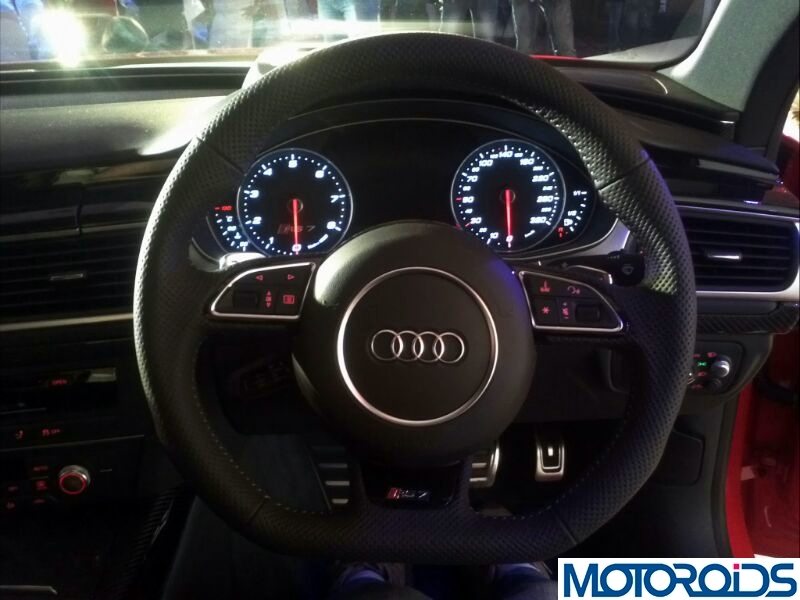 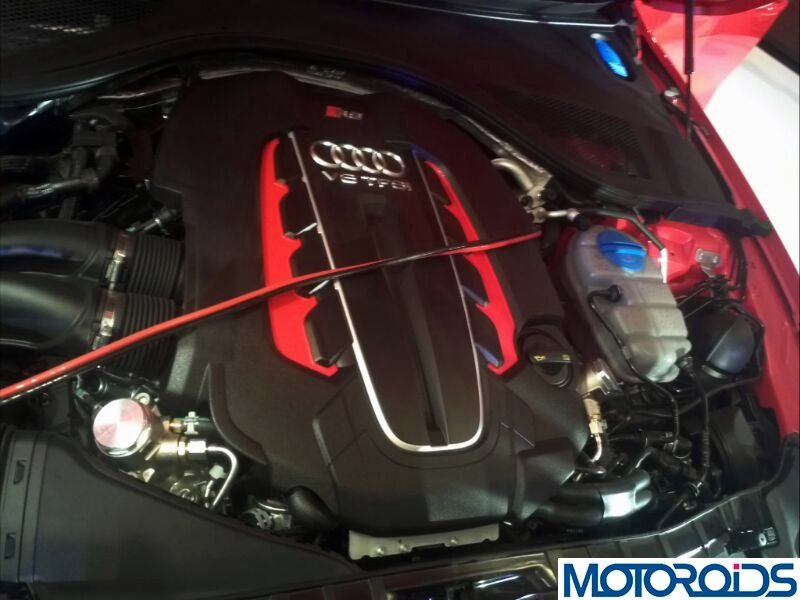 Powering the Audi RS7 is a 4.0-liter twin-turbo V-8 motor that develops a max power output of 560hp@5700rpm and has a peak torque rating of 516lb-ft@ 1750 rpm. All this force is transferred to all four wheels via an eight-speed ZF auto box. Thanks to features like cylinder deactivation system and a stop-start system, the car has a fuel economy of 21mpg in European combined cycle.

The Audi RS7 can hit the 100kmph from zero in just 3.9 seconds and has a top speed of 250 kmph. This can be raised to 304kmph on opting for performance boosting packages.

Stay tuned to Motoroids for a complete launch report on the new Audi RS7 India launch event. Scroll over to the next page for LIVE Pictures. Expect a bunch of hi-res eye candy set very soon.