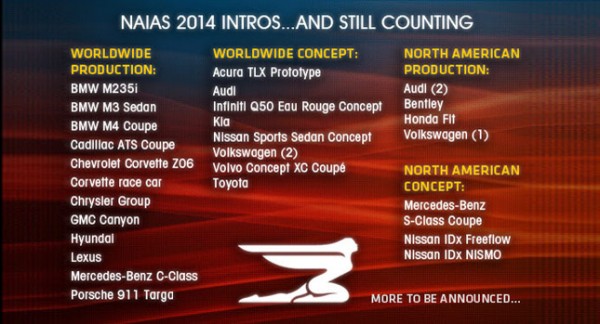 Almost every car fanatic has been eagerly awaiting for the upcoming North America International Auto Show 2014 (aka Detroit Auto Show) and while most of us do have an idea of what all is coming our way, the organizers of the eagerly awaited motor show have released a preliminary list that talks about World and North American premieres.

As we said above, this is just a preliminary list and more premieres will be announced in near future. However, among the premieres listed in this list here, the most important would be that of the Porsche 911 Targa, the two Volkswagen Concept cars and the Toyota design study.

It is being said that the Toyota concept that will make its public debut will be a study of a sports coupe that could spawn the rumored Supra replacement.The Audi study will be a compact crossover concept that is likely to get the Q1 nameplate, the Hyundai production car is the new Genesis and the Lexus is the RC F Coupe. We are still trying to dig out details of the two upcoming VW concepts.

Stay tuned to Motoroids for more updates on the upcoming North American International Auto Show 2014, which will be held in early January next year.