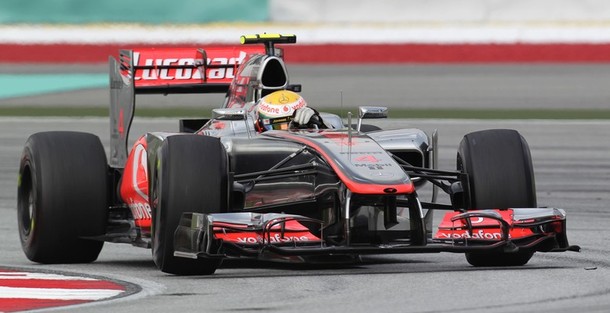 Brit F1 racer Hamilton is surely in his form these days. The McLaren F1 team driver had a podium finish in the Australian Grand Prix and now, Lewis Hamilton recorded a lap time of 1:36.219 and managed to be the fastest in the qualifying session. McLaren F1 will be very happy as its second driver, Jenson Button, qualified recoded a lap time of 1:36.368 to qualify for the second place at the grid. The third place went to Michael Schumacher.

On bagging the first place, Lewis Hamilton commented, “It’s been a good weekend so far. It’s been a tough day with the changeable weather and the temperatures climbing. We made some set up changes to the car, we still managed to do some good times – even with these guys pushing behind. Everyone is under the same amount of pressure. We all put pressure on ourselves. It’s very intense and the most exciting part of the weekend. I really enjoy it. I don’t know if the best place to start is here. It’s a long haul down to Turn One. The key is looking after our tyres and hopefully our car is in a much better position for the race tomorrow.” His team mate Button said, “Qualifying has been pretty good to me in the last two races so I can’t complain too much. It’s good for us as a team to be on the front row again. It’s nice to hear all your mechanics cheering in the background. I wanted it the other way round, but Lewis did a great job. It’s going to be a fun Turn 1.”

Schumacher said, “This was the maximum that was available. We managed to work the car very well over the whole weekend. The focus was to try and find the best compromise for both [the qualifying and the race] and I guessed we have achieved this. Third here is a very tight business so we can be more than happy and I look forward to tomorrow. I guess all of us have certain concerns because those temperatures are pretty new to us. We have learned quite a lesson in Australia and we have reacted. I’m more than happy with the progress and how we understand the car.”
News
,
Comments
Leave a Reply Cancel reply