Land Rover had recently debuted their new InControl Touch Pro Duo infotainment system in their Velar and now it has made its way to the Range Rover Sport. We’re here to tell you what this infotainment system is capable of and how it differentiates itself from other infotainment systems. Essentially the Land Rover Range Rover Sport gets two 10-inch high resolution displays vertically stacked one over the other. However, they are quite reflective making it hard to see on those sunny occasions. While the top part comprises information related to the infotainment, the lower half displays the vehicle-related functions. The top screen can be tilted to achieve better viewing angles or ease accessibility and comes with inbuilt navigation. 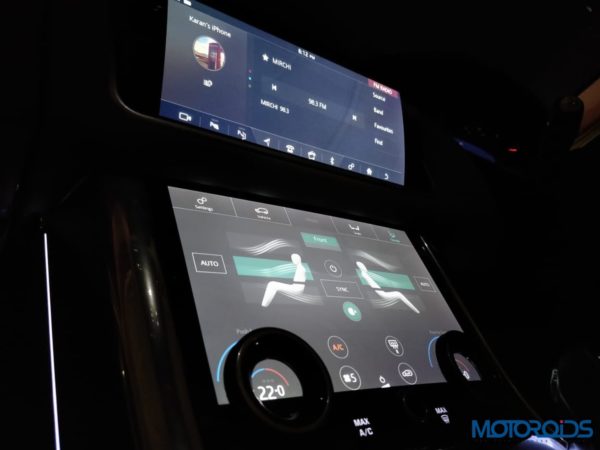 The screen also displays vehicle dimensions that allow the driver to better gauge the terrain based on the vehicles approach and departure angles as well as its general length and width. There is also an available live mode that allows you to see the tilt angle and the angle of incline it’s taking, and the steering angle, all in real time.

This system also displays all five terrain response system modes with a written summary of how each mode alters the car to best suit the circumstances. You’ve also been given the choice of ten different ambient lighting colours that can be accessed via the infotainment system, you can also adjust the brightness of the interior lights. The lower screen displays the aircon functions, you can pick what the startup screen displays with options ranging from climate, driver modes, phone, media or your last used feature. This screen also allows the driver to control the level of heating or cooling being applied to his or her seat and can control the temperature of individual seats. Take a look at our in-depth video that gives you a detailed walkthrough and explains everything Land Rovers InControl Touch Pro Duo system has to offer.