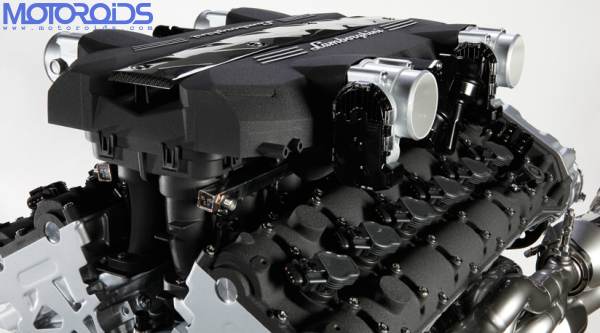 So what are the highlights of the new engine? Well, it’s the first built-from-the-scratch engine from the house of the Raging Bull since the original V12 that appeared in the 150GT car around 50, yes, 50 years ago. The new engine is mad using lightweight materials, and even after being a 6.5 litre monster it weighs in at a light 235kg. The crankcase and cylinder heads are made from ultra light aluminum-silicon alloy. The new V12 produces a crazy 700bhp of power (that’s more than 100bhp per litre) at a high 8250rpm and peak torque of close to 700Nm at 5500 rpm.

The new transmission system to help put all that power and torque to the tar has been christened ISR (Independent Shifting Rod). Somewhat like the twin-clutch system, the shifting rod from the next gear is already kept engage for shifts which happen before you could think of blinking. The shift time for the new transmission system will almost be half of the twin-clutch systems, and the weight, at 79Kh is substantially lower than a dual clutch system.

Even with the new engine the heavenly exhaust and engine note of the Lambo v12 will not be lost. It’ll deliver the most beautiful music to the driver as well as the bystanders, while still emitting the least amount greenhouse gases ever.