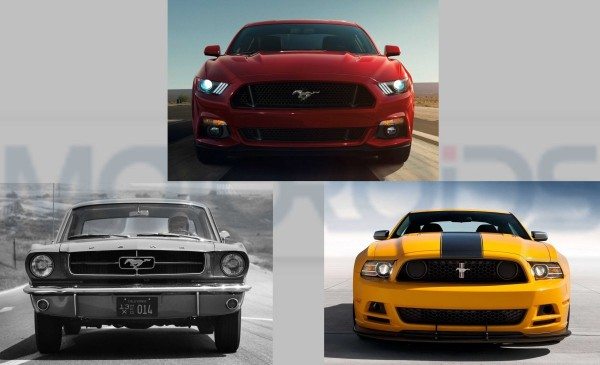 The new 2015 Ford Mustang looks a tad sleeker than last gen car, with stress being more on looking sporty than muscular. When viewed in alongside the fifth-gen model, the new Mustang looks more dynamic and I daresay, more racy.

While the new sixth gen model shares its wheelbase with the outgoing version, it does boast of dissimilar proportions and a very different stance. The new Mustang is lower and surely looks wider and meaner than the earlier model.

The front fascia of the new car though, has enough resemblance with the original classic! While we need to make it clear that the new ‘stang doesn’t have a retro design, it is clearly related to the cult-classic in a big way.

Overall, while the classic Mustang continues to be our favorite and the last gen Mustang will always be remembered for giving the retro styled muscle car culture a great push, the latest gen ‘stang wins a lot of brownie points from us for being a modern looking car that seems to have taken truck-loads of inspiration from the original classic.

The new 2014 Ford Mustang, which is the sixth generation of America’s favorite muscle car, will be sole in as many as three different engine options.