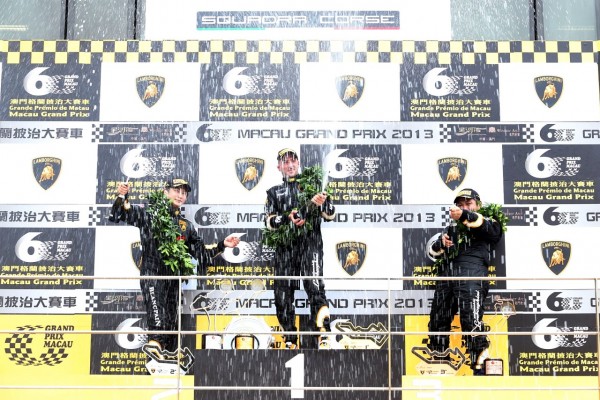 Filling closed-off streets with the aggressive roar of the raging bull, the Lamborghini Blancpain Super Trofeo Asia Series entered the exotic peninsula of Macau for the first time ever, where this year’s Grand Final flourished under the grand excitement of the 60th Macau Grand Prix.

Jointly hosted by Italian luxury super sports car maker Automobili Lamborghini and Swiss Haute Horlogerie manufacturer Blancpain, title champions of the Lamborghini Blancpain Super Trofeo Asia Series 2013 were crowned on Sunday at this 6th and final round. Under the thunderous applause of crowds that surrounded the Guia circuit, gentlemen drivers enjoyed the ultimate test in this year’s race series. Renowned for its challengingly tight corners and demanding surfaces, this racetrack presented unchartered territory not only for most drivers, but for the Gallardo Super Trofeo 2013, which fiercely entered this legendary circuit for the first time this weekend.

After showing unshakeable success this season, Jiang Xin and Max Wiser (#9) were declared PRO-AM champions for the Lamborghini Blancpain Super Trofeo Asia Series 2013. In second place were Dilantha Malagamuwa and Zen Low (#69), followed by Han Lin and Hanss Lin (#36) in third, each of whom showed great dedication this season that was justly rewarded on Sunday.

Also basking in glory after persistently demonstrating their passionate will to win were China’s Zheng Ting and Steven Lin (#66), who were crowned champions of the AM class. In second place was Andrea Garbagnati (#6), whose triumph was followed by the dynamic teamwork and passion of George Chou and Ida Masahiko (#24), who won third place.