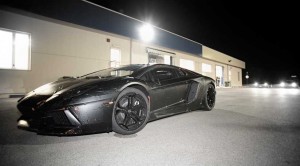 A spec sheet, allegedly that of the upcoming Lamborghini Murcielago’s replacement or the Aventador (Jota?? perhaps) is doing the rounds in the web world. The spec sheet has all the data you would need to know about the Aventador.
The new Lambo V12 supercar spec sheet is titled LP700-4 which is a good enough reason for us to believe that the spec sheet is indeed legitimate. We have also managed to get hold of an additional spy pictures of the car apart from the front shot that we showed you a couple of days ago.

Here are the key details about the car from the spec sheet.

The transmission sends drive through a seven-speed automated manual ‘box and on to a Haldex-clutch operated four-wheel drive system. A big surprise comes in the form of the 1575kg dry weight in this document – 10kg more than the outgoing steel and carbon Murcielago. It’s notable that the Aventador is allegedly made from carbonfibre and Lamborghini has been heard making noise about its lightweight construction. A Lamborghini spokeswoman said that the leaked spec sheet had been put together from bits and pieces of a dealer presentation, and is not a factory development.
The car will be first unveiled at the Geneva Motor Show, which is still a four months away. Much can change during that period we believe