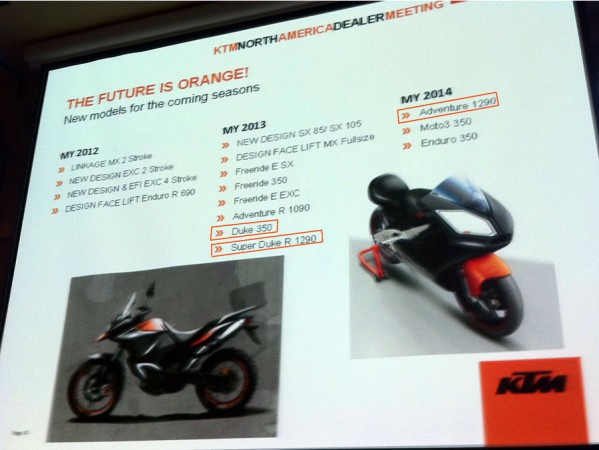 KTM, the Austrain bike maker, in which Indian Bajaj Auto also has more than 40% stake is planning to launch some its models in India as well. The KTM 200 Duke has been caught testing in India many a times, and is slated for a launch very soon. In addition to that, we already made you aware of KTMs plans of launching a 350cc bike in the Indian market.

Now, in another scoop story fresh out of the oven, a KTM USA dealer seems to have managed to click a picture from a company presentation talking about the brand’s model lineup for the next three years.  As you would expect, the presentation clearly talks about the 350cc bike that we discussed with you in our earlier article.

The presentation slide reveals that the 350cc bike will be presented in two formats – a Moto3 sportsbike and an off-road Enduro. For the uninitiated, Moto3 is a modern, four-stroke interpretation of the two-stroke race replica 250s of the past, such as the Suzuki RGV250 and the Honda NSR250.

The presentation slide has a rendered image of a faired sportsbike, and we have every reason to believe that this is the KTM 350 which may be introduced to India as well, sometime in 2013, as it is listed as Model Year 2014. However, there is a Duke 350 also which features in the list of products for Model Year 2013. This 350 Duke, according to us is the real deal for India.

Discuss this topic in Motoroids TALKS