Thanks to the folks at Thrill of Driving, we now have a few more shots of the upcoming KTM RC 390. The test bike is minimally camouflaged, and it appears that KTM has finally made the transition to the Production Version.

You can notice that the bike is devoid of its decals, but the paint scheme is exactly similar to the one that exists on the international edition. As the photographed bike carries all the necessary bits and pieces like the rear view mirrors, side blinkers and the registration plate, we feel this is a version that is almost production-ready. One can easily mark out the wicked-looking dual projector headlamps, the protruding snout with the LED DRLs and a sky-high rear tail with a black seat cowl. 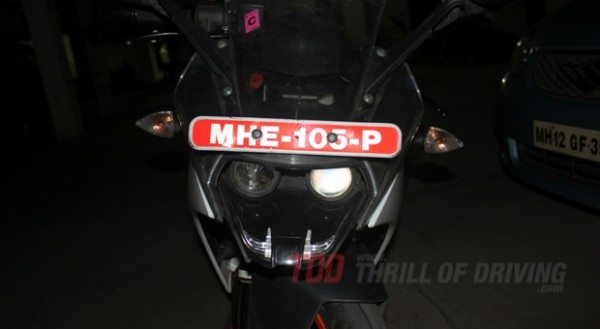 Even though the RC 390 will share a major portion of its parts with the naked sibling Duke 390, it will have enough of distinction to carve out an identity for itself. The differentiating will be in the more aggressive seating position, accompanied by rear-set footpegs as well as tweaked gear ratios to give a bit of urgency in the bike’s acceleration. The Rc 390 will also receive Clip-On handlebars, and slight reworked pillion footpegs and rear subframe.

A sure-shot head-turner will be the rear tail-light in the form of Twin Stripes, which will provide a reminiscence to another highly successful brand in the Indian Motorcycling arena. 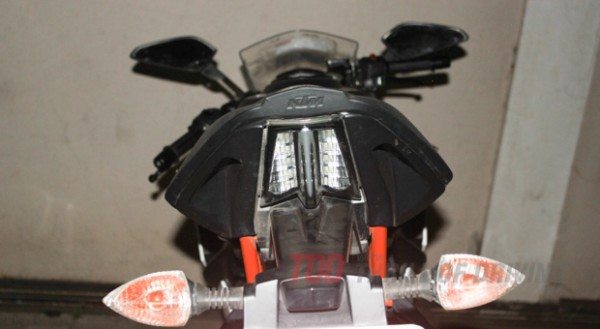 Even though the added fairing and bodywork will result in the KTM RC 390 tipping the scales at a heavier-as-compared-to-Duke 147 kilograms, KTM claims that it will have a higher top speed of about 180 kmph. This will definitely need some altering of the gear ratios as the KTM RC 390 is also powered by the 375 cc single pot powerplant found on the Duke 390. The 373.2cc single cylinder powerplant will put out 43 bhp of power. Stopping duties will be taken care of by 300mm front disc brakes and 230mm rear discs. 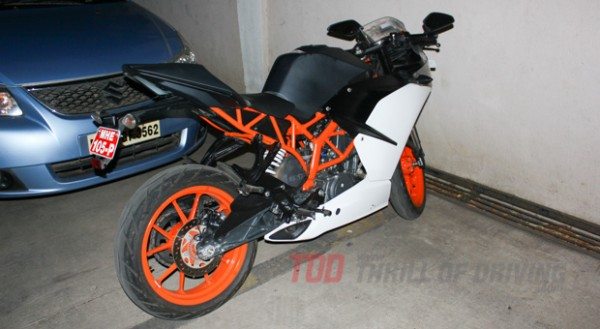 The KTM RC 390 is definitely putting a lot of motorcycle enthusiasts on the edge of their seats. Put aside the specifications and the sharp features of the bike. Take into account the aggressive pricing strategy of Bajaj, and we feel the KTM RC 390 could be priced in the region of INR 2.10 lakhs ex-showroom Pune. This is a slight premium over the KTM 390 Duke, and what you get is a thorough-bred sportsbike that catches the eye. We have a winner on our hands!! We are eagerly waiting for the KTM RC 390 to hit the showroom floors, probably sometime by the end of this month. Aren’t you, too??