Home News KTM Duke 390 India Launch in May. To come with ABS 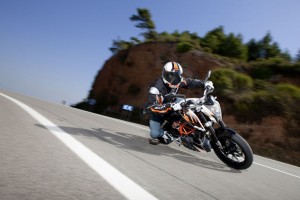 The KTM 390 Duke has to be among the most awaited bike launch in India this year. Numerous speculations have been abounding on the cyber space regarding the KTM 390 Duke India Launch date but nothing concrete has emerged yet. However, what is for sure is that the new bike would be here before mid-2013.

The Duke 390 looks much like the Duke 200 but comes with a more powerful engine to tickle the taste buds of ever performance hungry bike aficionados of our country.

Powering the upcoming KTM Duke 390 is a single-cylinder, fuel injected, liquid-cooled, 4 stroke, 373cc motor that has a max power output of 44 bhp and a peak torque output of 35 Nm. The engine is mated to a 6-speed gearbox.

It may be noted that the international spec KTM 390 Duke comes with an optional ABS system that has been developed by none other than Bosch. This ABS system can be turned ON or OFF by the rider using a switch. It has now emerged that the KTM-Bajaj isn’t skipping on the ABS unit for the India spec bike and the KTM 390 will come to us with the Anti-lock Braking System. The Bosch ABS unit on the KTM 390 is the 9M ABS model that has sensors at the front and rear wheels. These sensors are connected to an independent microchip for the ABS and monitor engine torque to enhance the braking. The upcoming bike comes with 4-piston brake calliper instead of the 2-piston calliper on the Duke 200.

The KTM Duke 390 will be locally produced at Bajaj Auto’s Chakan facility and high amount of localization means that the bike won’t be priced above INR 2.5 lakhs.