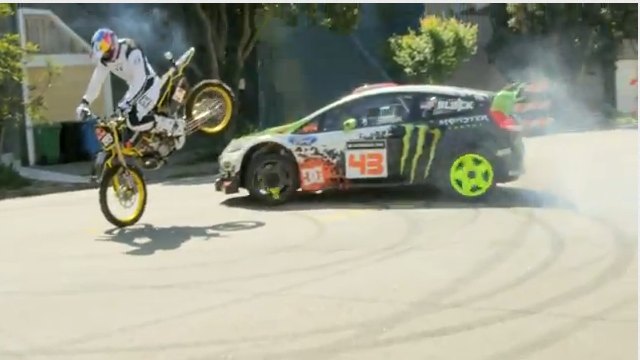 Ken Block is back with his Gymkhana video franchise, this time getting out of custom made tracks and hitting the streets of San Francisco. Of course he’s not mowing down pedestrians as he pulls off his incredible antics as he performs his tricks in properly controlled environs.

We have seen a good amount of Ken now, and understand how difficult it is to pull out new stunts every time. While the gutsy driver adds novelty by taking some extra air in his Fiesta this time, his production team adds some more drama to the act by using multiple cameras, ultra slow motion grabs and by capturing the spirit of the city as he drives around its street.  To add some more spice to the taste, we have one Travis Pastrana taking the rear of his bike up to let the nose of Ken’s Fiesta pass underneath it. Spectacular!

The best in the Gymkhana series? Um, no. But definitely worth a watch. Enjoy, and do let us know how you find this version when compared to some of the earlier vids.