Keanu Reeves co-founded the Arch Motorcycle company way back in 2007 along with designer and engineer Gard Hollinger. In 2012, the duo showcased a prototype christened as the KR GT-1 Prototype which was based on Keanu Reeves’s 2005 Harley-Davidson Dyna Wide Glide.  Visually that bike had a new fuel tank, rear cowling, seat, foot controls, frame and exhaust system. The thoroughly re-engineered frame constituted of a sport bike derived mono-shock with a floating swing arm coupled to a CNC milled aluminium sub-frame. 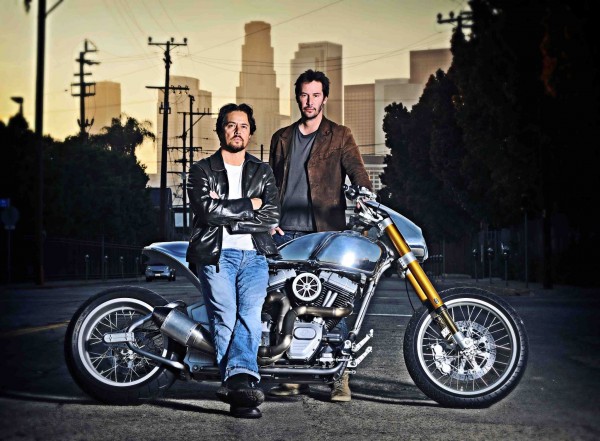 Keanu Reeves and Gard Hollinger with the KRGT-1 prototype.

Now the venture is launching its first limited production model, the Arch KRGT-1, based on that very concept.Developed in association with S&S Cycle and Baker Drivetrain, the KRGT-1 combines classic design and state-of-the-art manufacturing techniques. The chopper-inspired sports naked is powered by a 2-litre S&S v-twin engine which is mated to a six-speed Baker Drivetrain transmission. The model has a chassis in aluminum and steel, BST wheels in ultralight carbon fiber, a revised head-lamp fairing and Ohlins suspension. The starting price of the Arch KRGT-1 is a jaw-dropping $78,000, which translates to around Rs 48 lakhs INR.