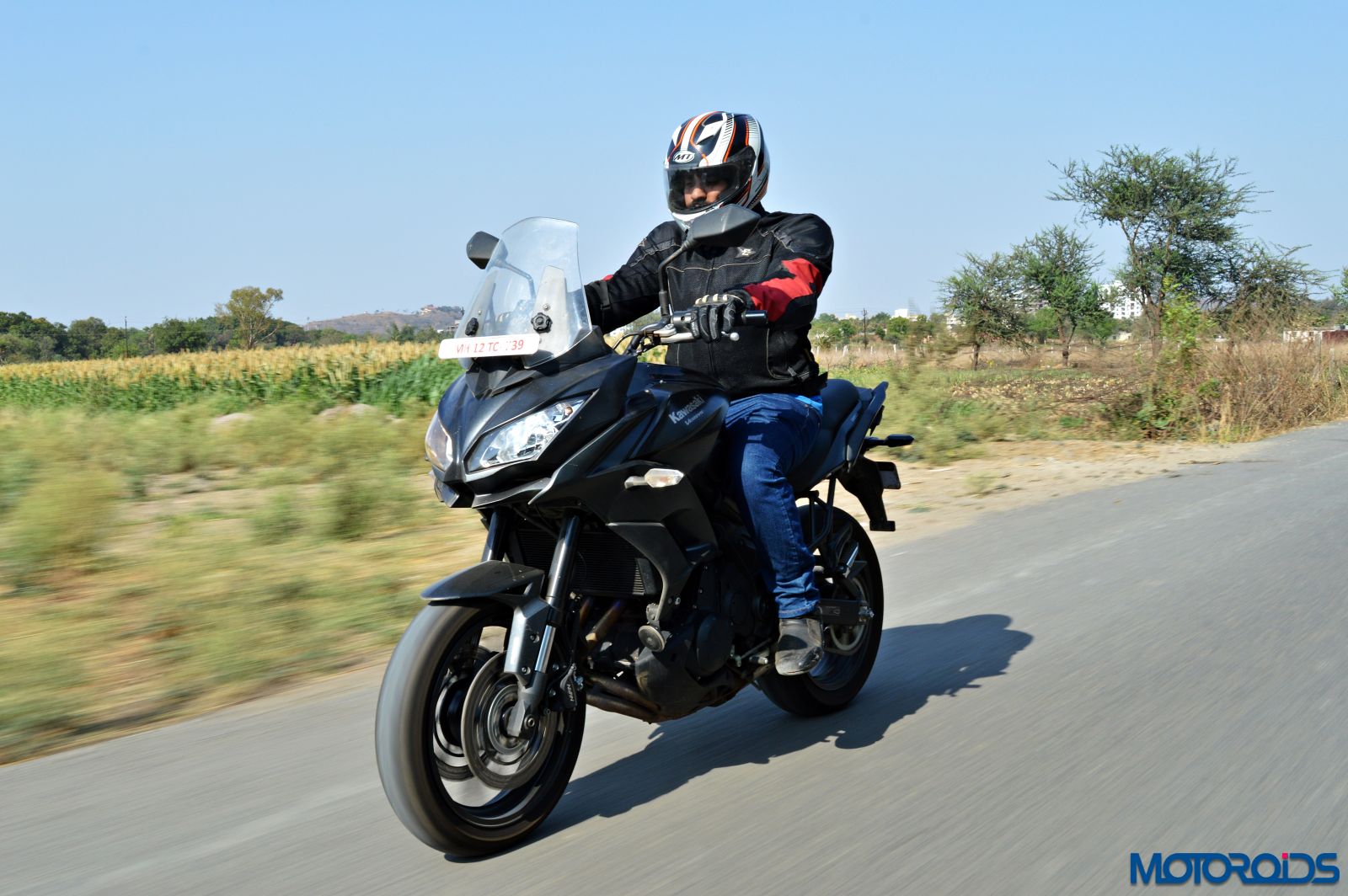 “Sometimes you find yourself in the middle of nowhere, and sometimes, in the middle of nowhere, you find yourself” – a quote that probably appeals most to the touring aficionados of the motorcycling world. Sometimes, happiness is wandering off into the deepest jungles, or the most barren deserts, or the highest of snow-clad mountains. That’s probably why touring enthusiasts are the most happy and friendly bunch of chaps you will ever meet.

But why a sports tourer? Supersports are fab but you would hardly use the true potential of the motorcycle on your regular roads without putting your life, and others, into jeopardy. So unless you live close to a race-track, the motorcycle will mostly remain within a fraction of its true potential for most of its life. Naked roadsters are the probably the best set of wheels to own, especially if your rides are limited within the city limits. But the massive windblasts due to the lack of a windshield makes it quite a task to ride one to its full potential. Cruiser motorcycles are more style oriented, and do have their limitations when it comes to handling and agility. 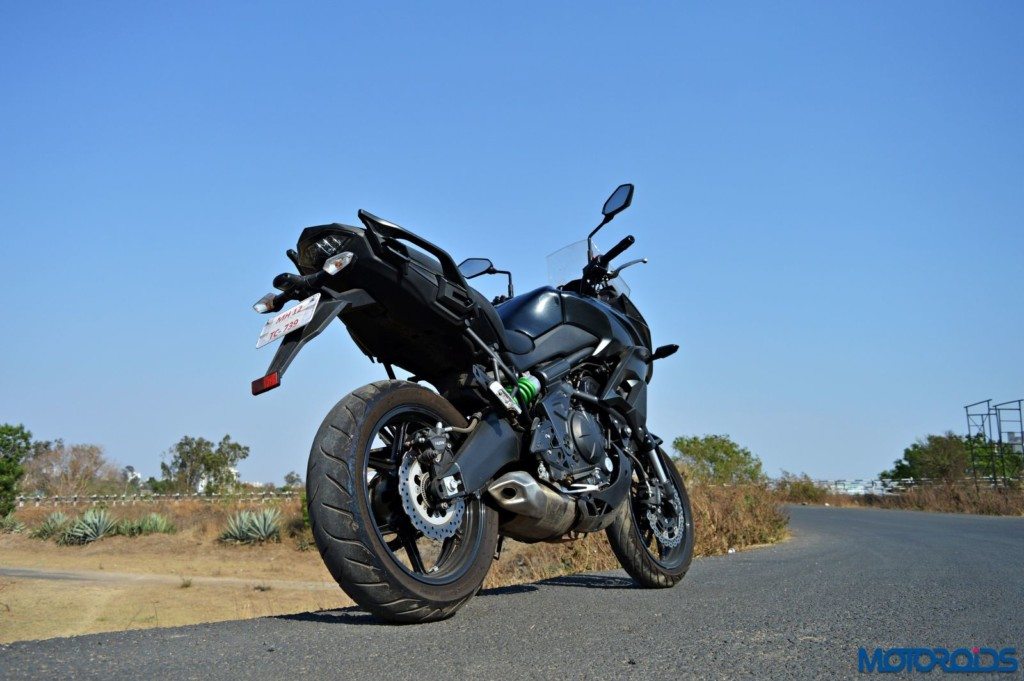 But tourers, adventure or sports, are probably one part of the motorcycling universe that offers you the best of all worlds. They are comfortable to ride and clock more miles faster and comfortably than most other categories of motorcycles. They’re practical, and they are relatively sporty too for you to have a fun-filled weekend with your pals around the twisties.

Last summer, my colleagues had a great time with the Kawasaki Versys 1000, the litre-class tourer from the Land of the Rising Sun. The motorcycle was a stunner, offering one of the most refined ride experiences that we have had till now. While I missed my chance to get astride the litre-class tourer, I wasn’t ready to let go off the opportunity to ride its lower-displacement, and probably more practical version, the Versys 650. 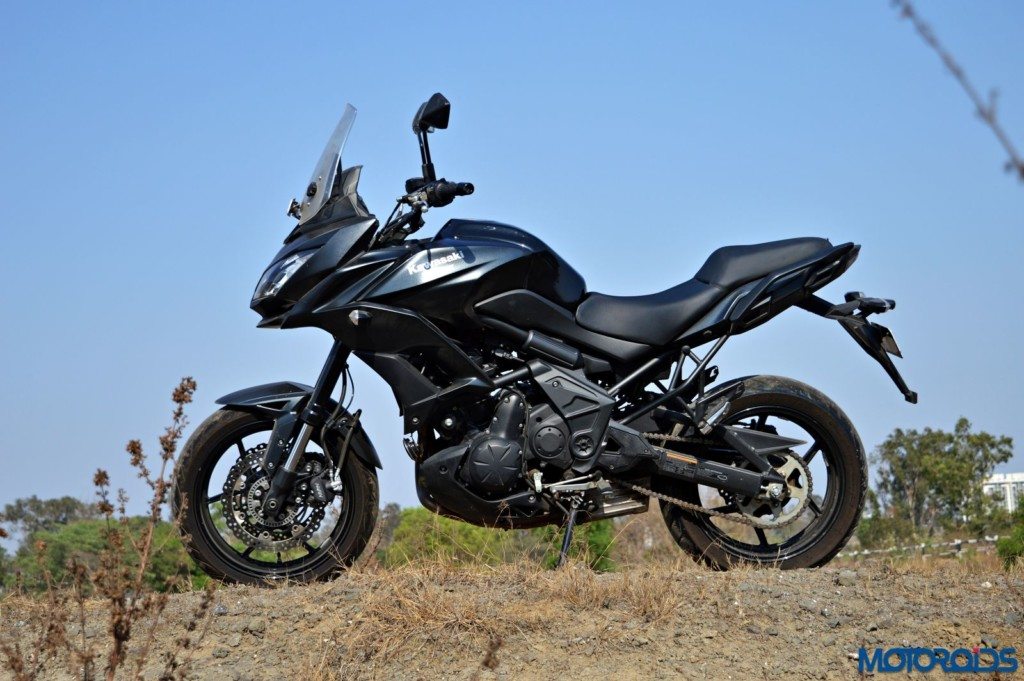 I have had a couple of short stints with the Kawasaki Ninja 650 and I was utterly dazzled by that unbelievably refined and thoroughly bred parallel-twin motor. The lack of ABS was a turn off while the relatively lower ground clearance would make you think twice before taking it off the tarmac. And that’s where the Versys 650 walks into the room and steals the limelight.

We rode the Kawasaki Versys 650 in and around Pune, on the smoothest of roads and a few rough patches to find out how practical is the motorcycle for the Indian conditions. 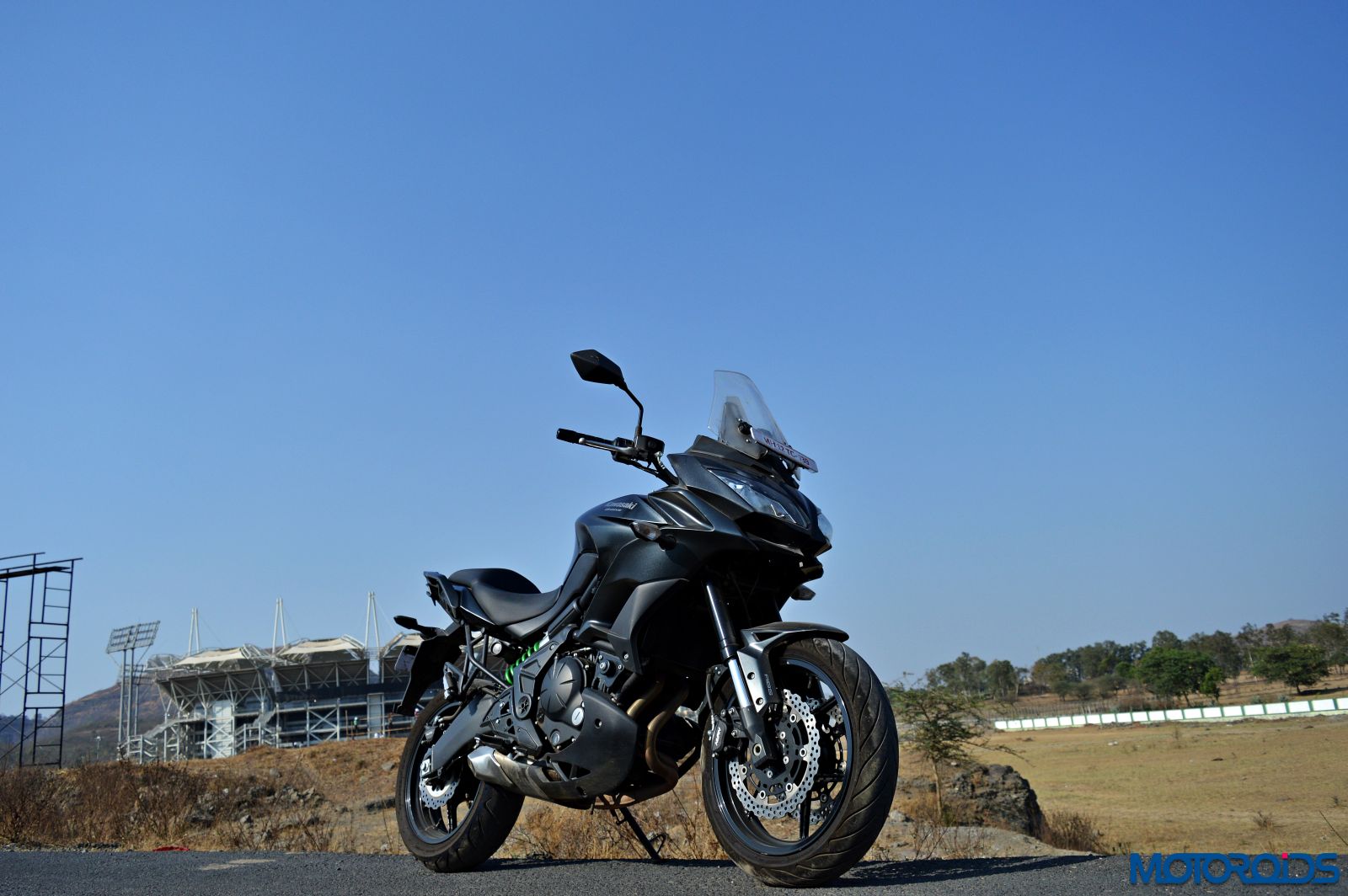 The Versys 650, with its pointy beak and the tall structure, carries the silhouette of its litre-class namesake. Closer inspection, however, reveals some design changes that differentiate this middleweight tourer from the 1000cc model. The front gets the twin-pod illuminators, identical to the Versys 1000, but the fairing gets some tweaks under the headlights and on sides when compared to the latter. The fairing looks more proportionate than the litre-class model which makes the Versys 650 all that more appealing.

Behind that windscreen is a semi-digital instrument cluster with analogue tachometer. The console shows a plethora of information such as speed, fuel gauge, 2 trip meters, range, fuel economy, high oil temperature, clock and an ECO indicator. The ECO indicator turns on when maximum efficiency is achieved. 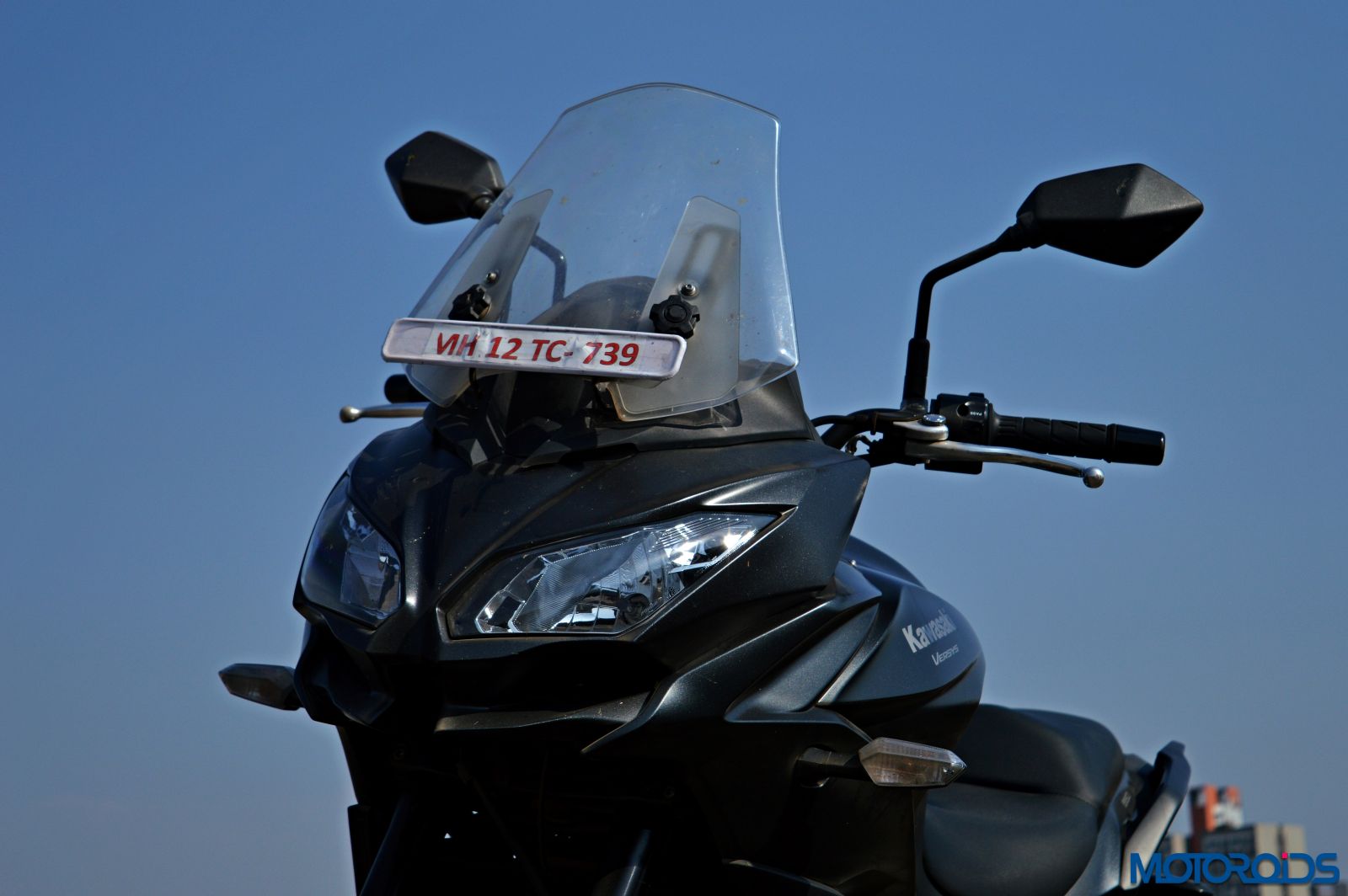 Unlike the Versys 1000’s twin-spar aluminium frame, the Versys 650 is built around a double pipe diamond frame. The fuel tank is identical to the Versys 1000. That design, along with the exposed double pipe diamond frame, makes tank bag installation, especially the non-magnetic ones, much easier than the Ninja 650. Similar is the case at the rear. The exposed tubular subframe comes handy for installing saddle and rear seat bag in case you are not willing to buy panniers. You can also install the OEM panniers and a hardtop box if you intend to do some serious touring, especially in the monsoons. The pannier mounts are neatly merged under the pillion grab rail which gives the rear a clean look. 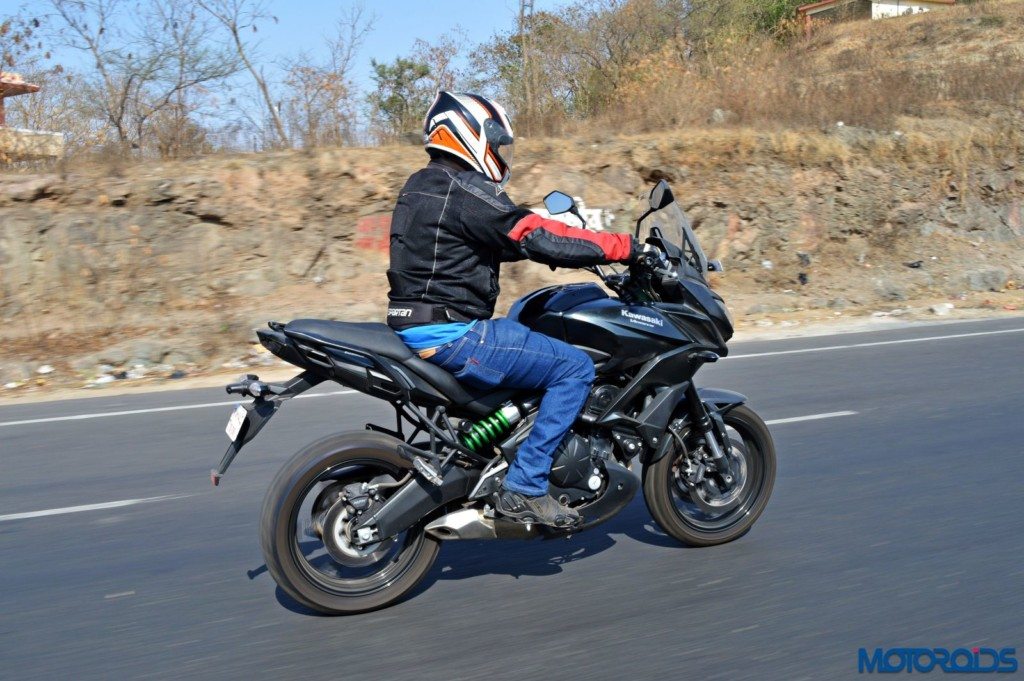 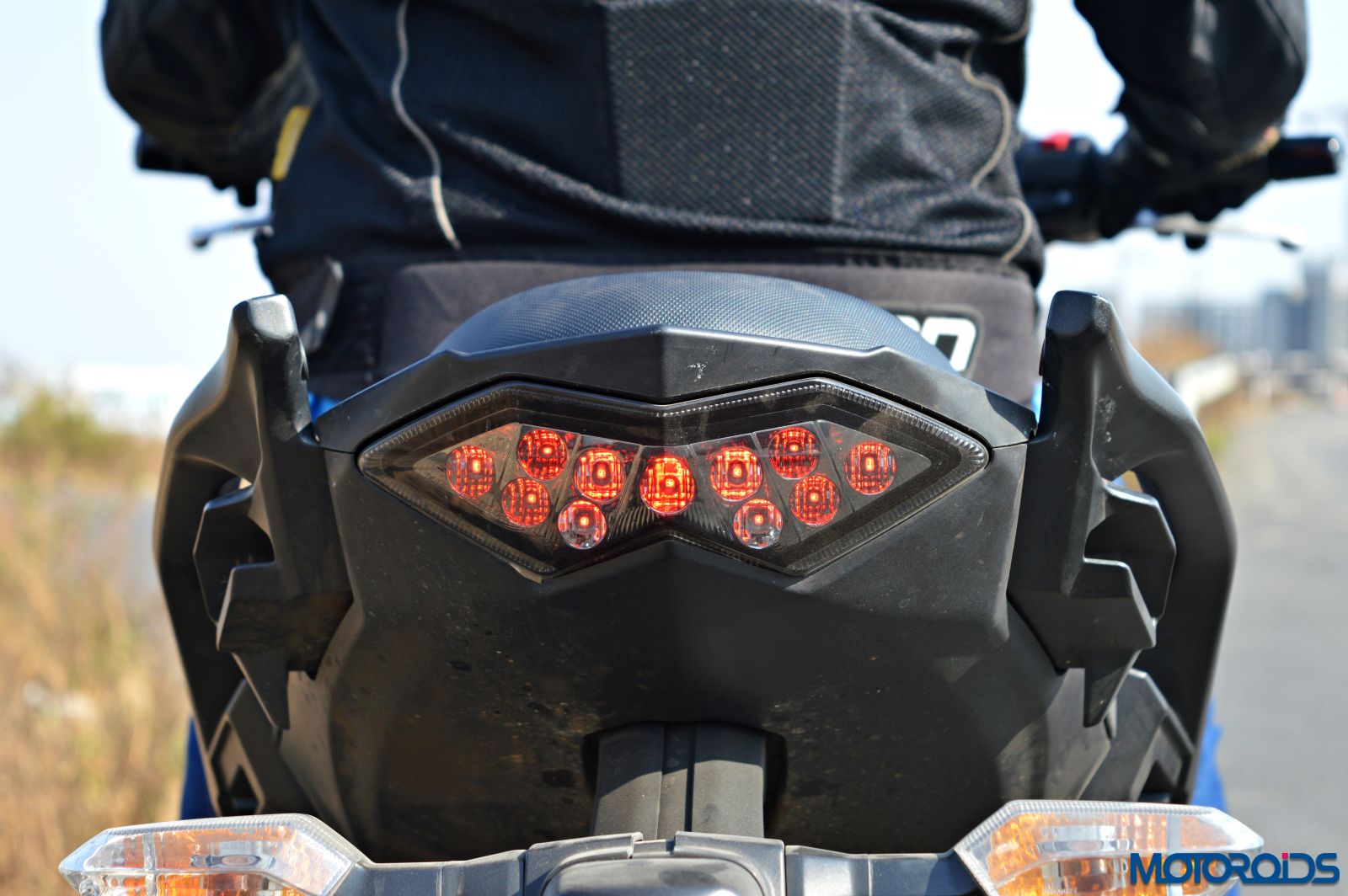 In terms of specifications, apart from the identical rake and trial, the dimensions of the Versys 650 are marginally larger than the Ninja 650. But despite the added length, the wheelbase is extended by just 5mm. We’ll speak more about that in the handling part of the review. The ground clearance stands at a healthy 40mm higher than the Ninja 650 while the seat height is 35mm taller. The 170mm ground clearance is tall enough to tackle most challenges that the Indian riding conditions will throw at it, and probably more.

The overall fit and finish is commendable and we could not point any faults in the quality department. The motorcycle, with the semi-fairing and the exposed rear-frame, looks quite lean and more proportionate than the Versys 1000 which really works in its favour. The adjustable windscreen that comes as a standard fitment is a blessing and keeps windblasts in check even as one goes ballistic on the throttle. The motorcycle that we received had a good 8,000 km. Since all of those kilometres were delivered at the hands of motoring scribes, the motorcycle surely had undergone some abuse during testing. We did observe some unexpected vibrations on the seat and foot rests. A word with a couple of existing owners settled the issue, as they denied having any such issues with their machines.

Check out the motorcycle in more detail through the images and captions below: 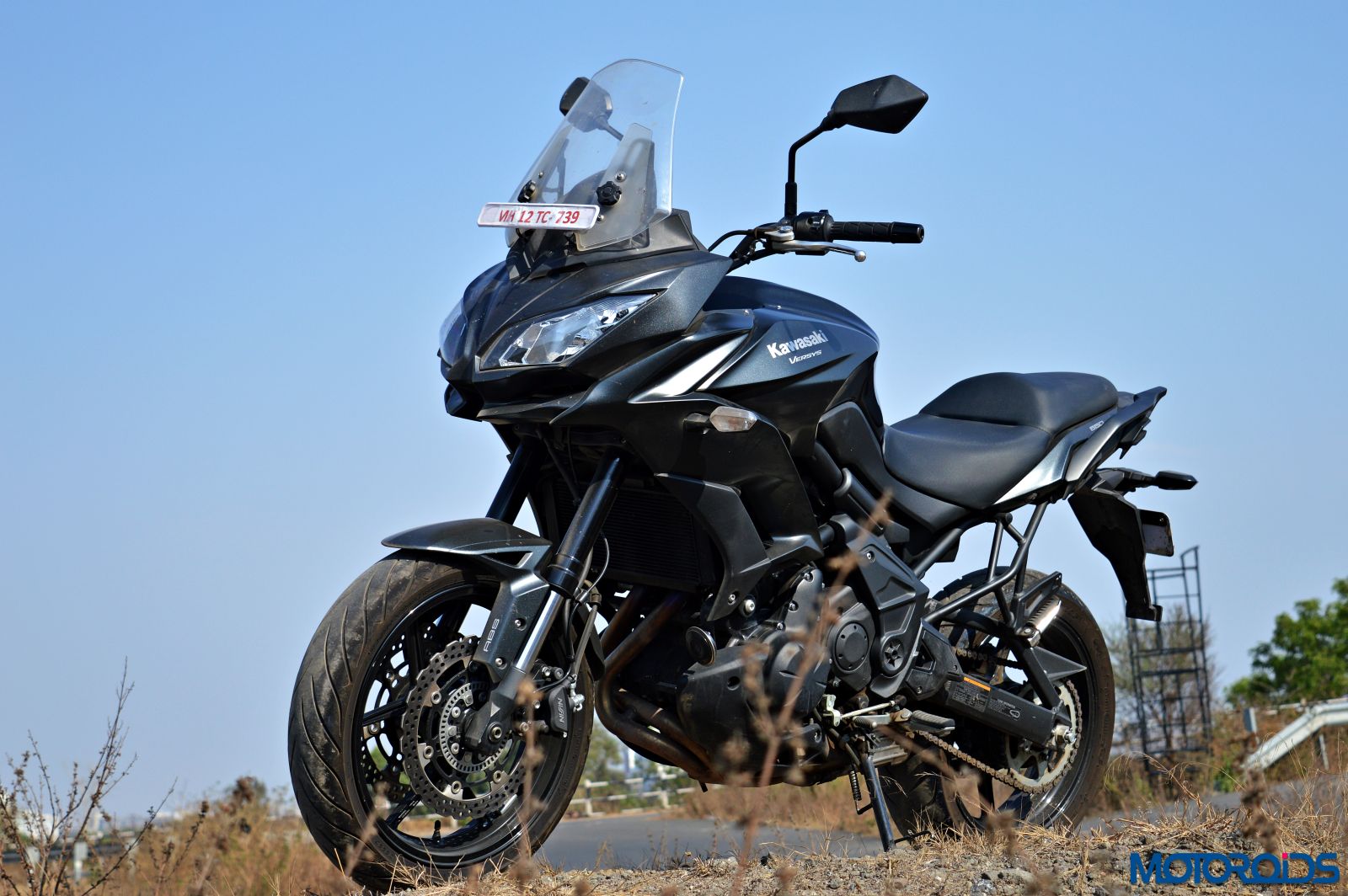 Versys 650 carries the silhouette of its litre-class sibling, but looks more proportionate with the re-designed fairing 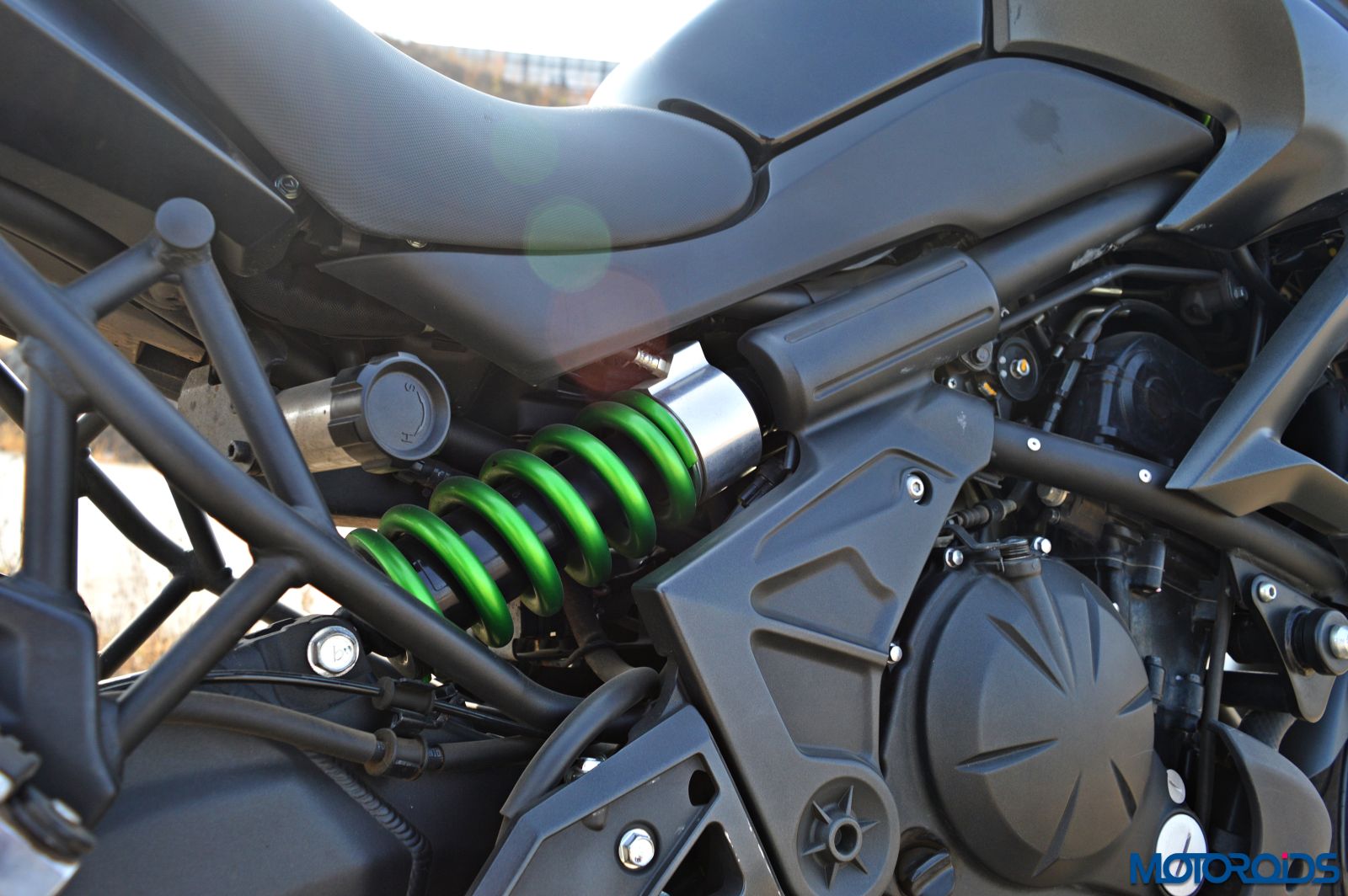 The Versys 650 shares its engine with the Kawasaki Ninja 650 and ER-6n. However, it comes with a different state of tune for a meaty low- and mid-range. We love that exposed, offset spring in a pearlescent green finish 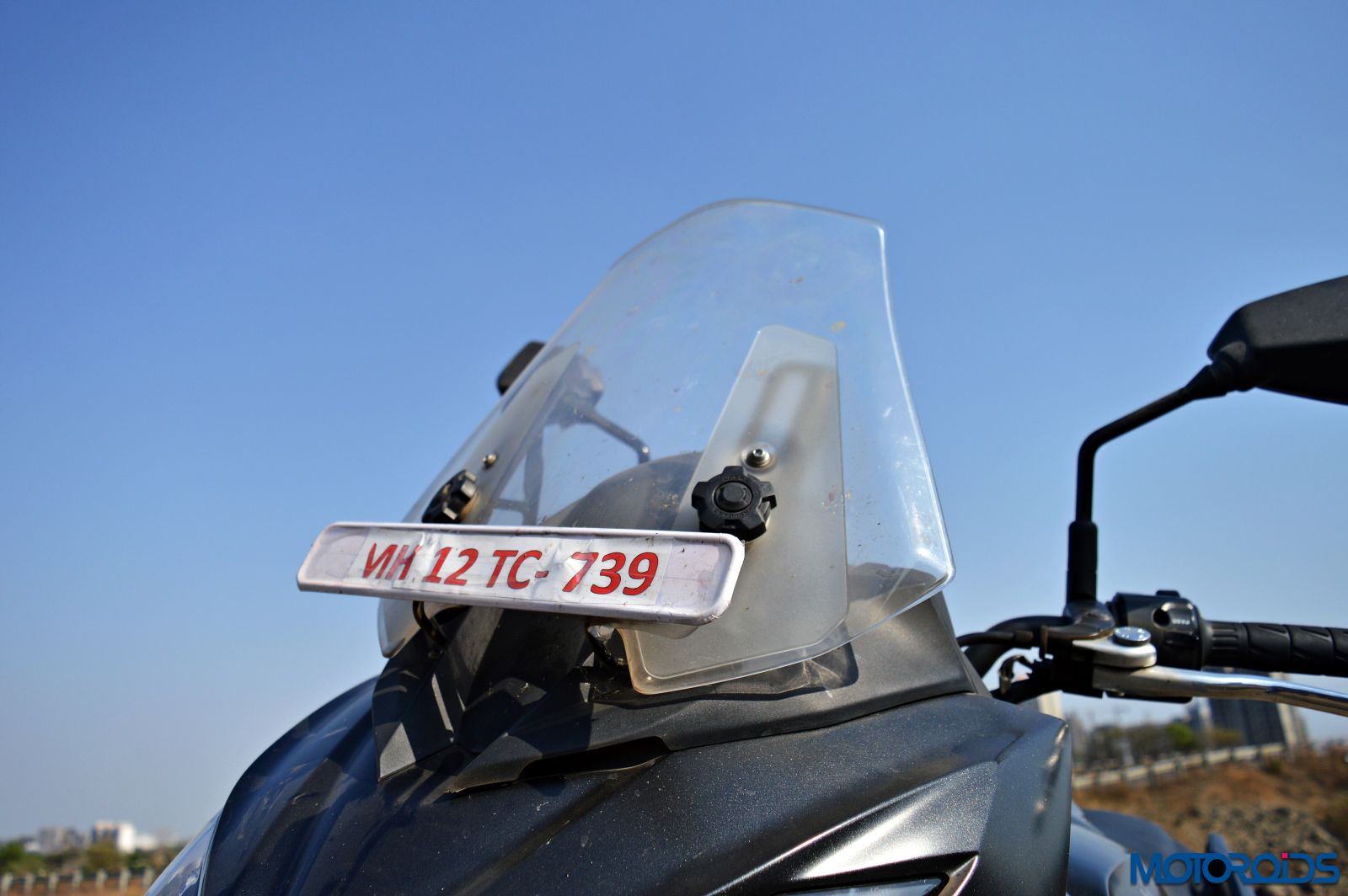 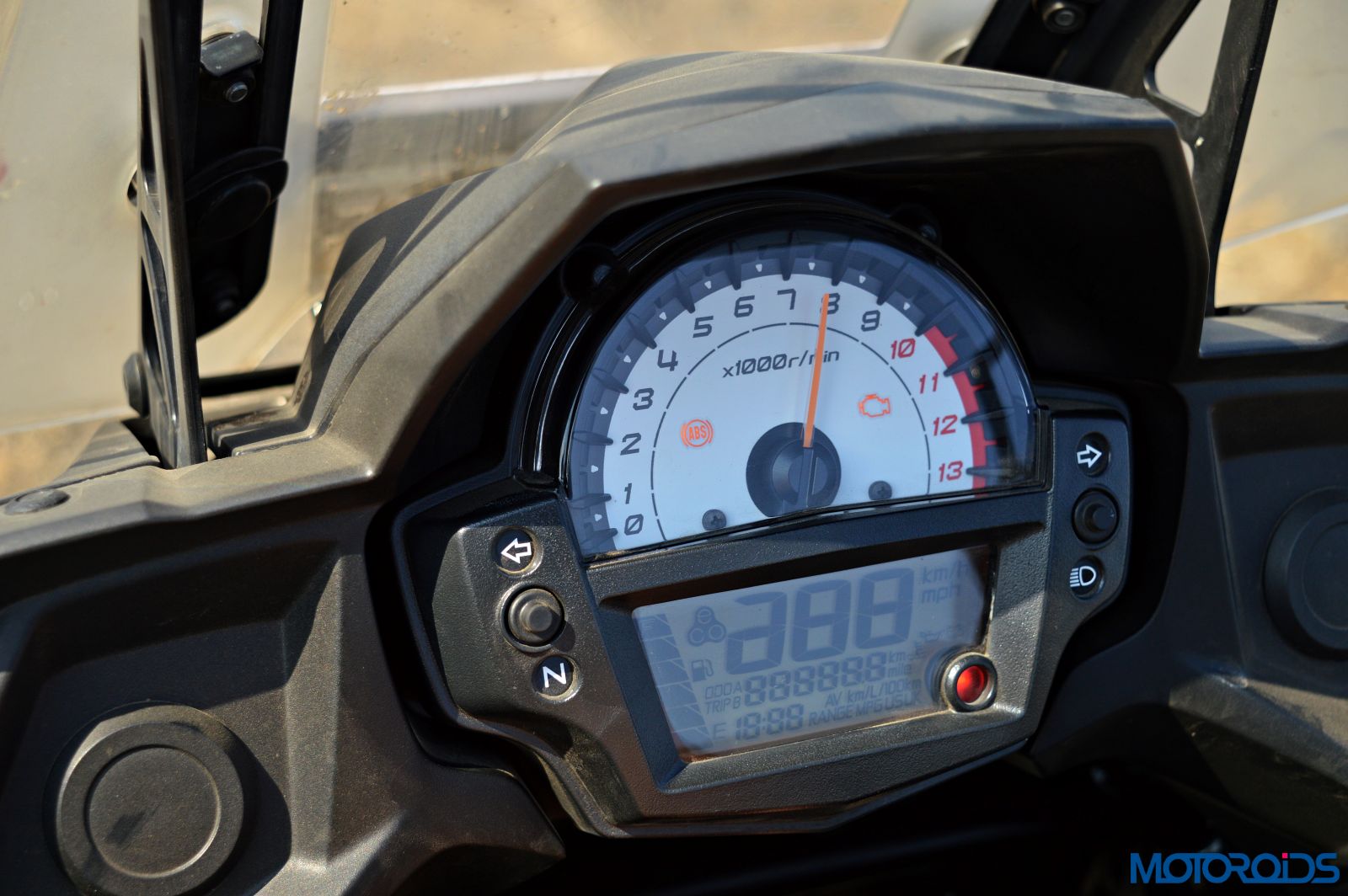 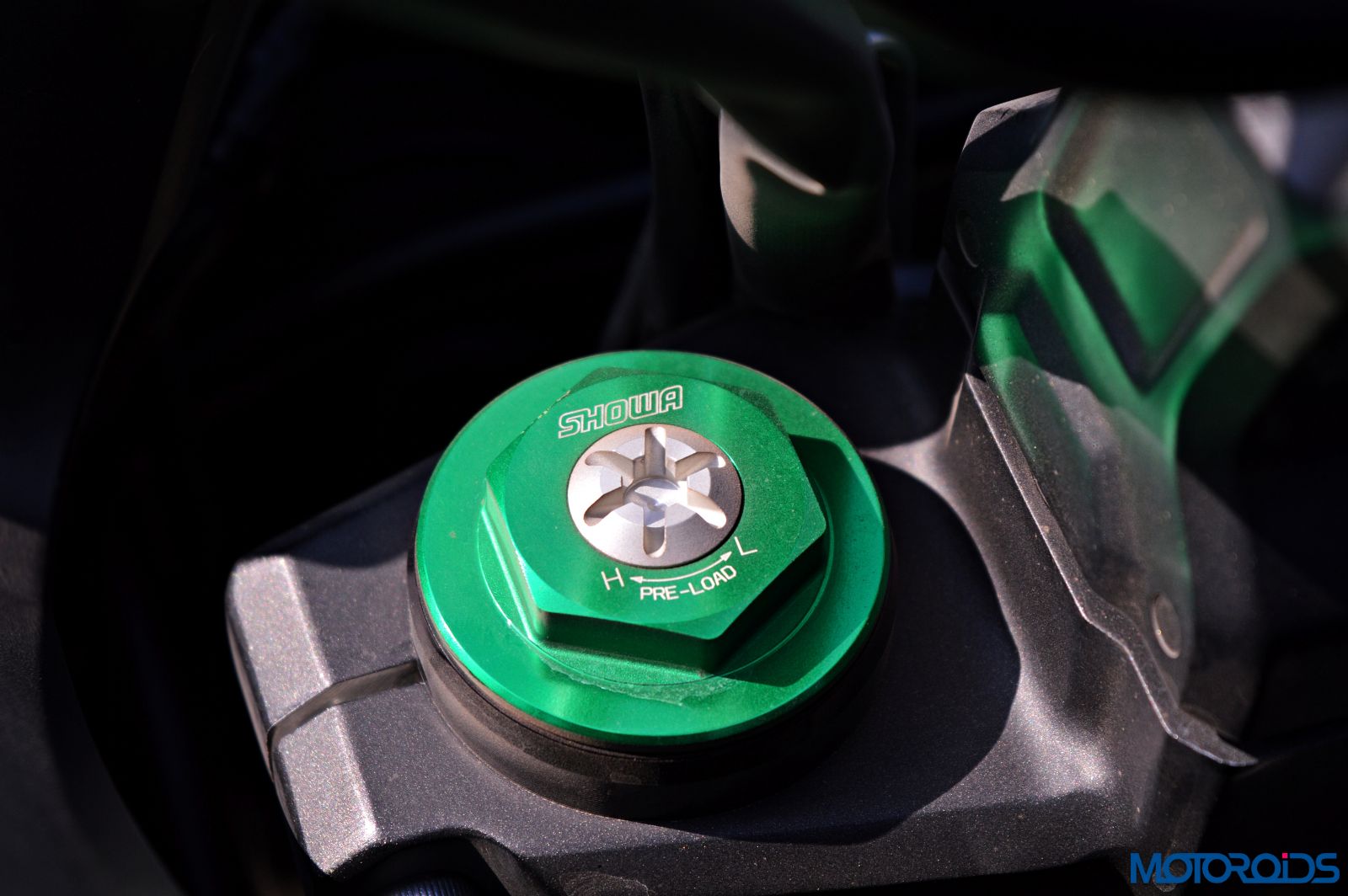 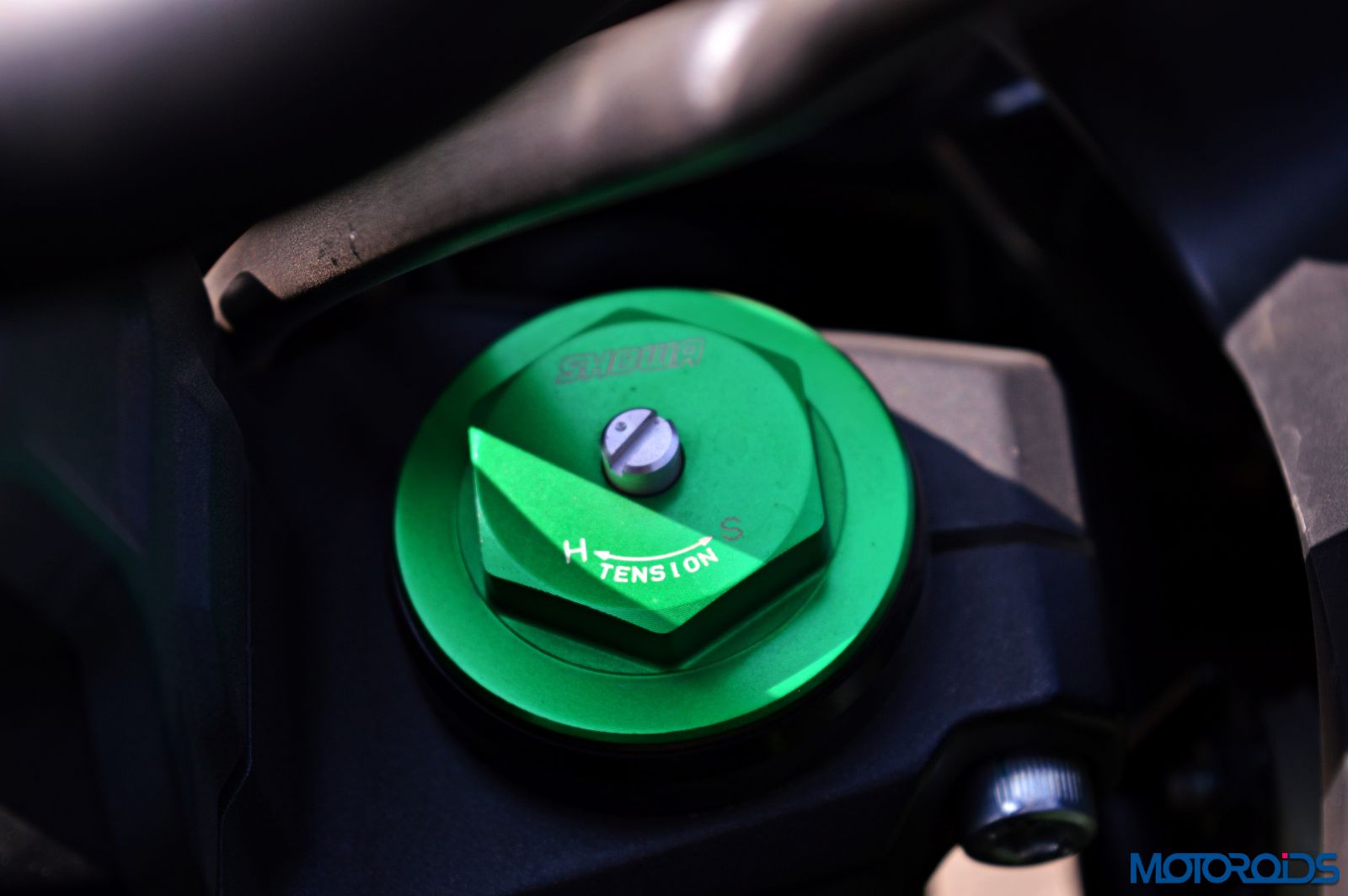 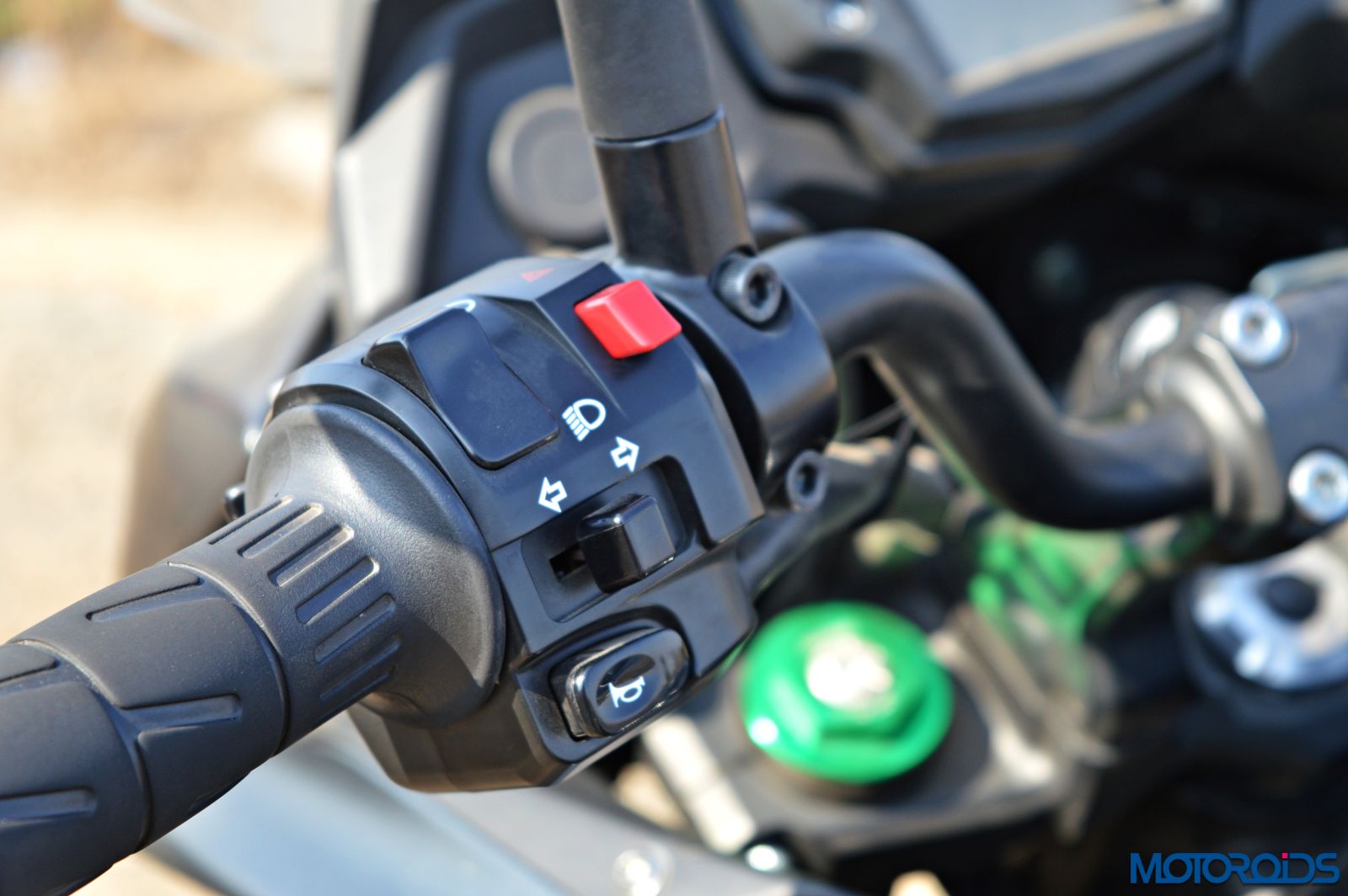 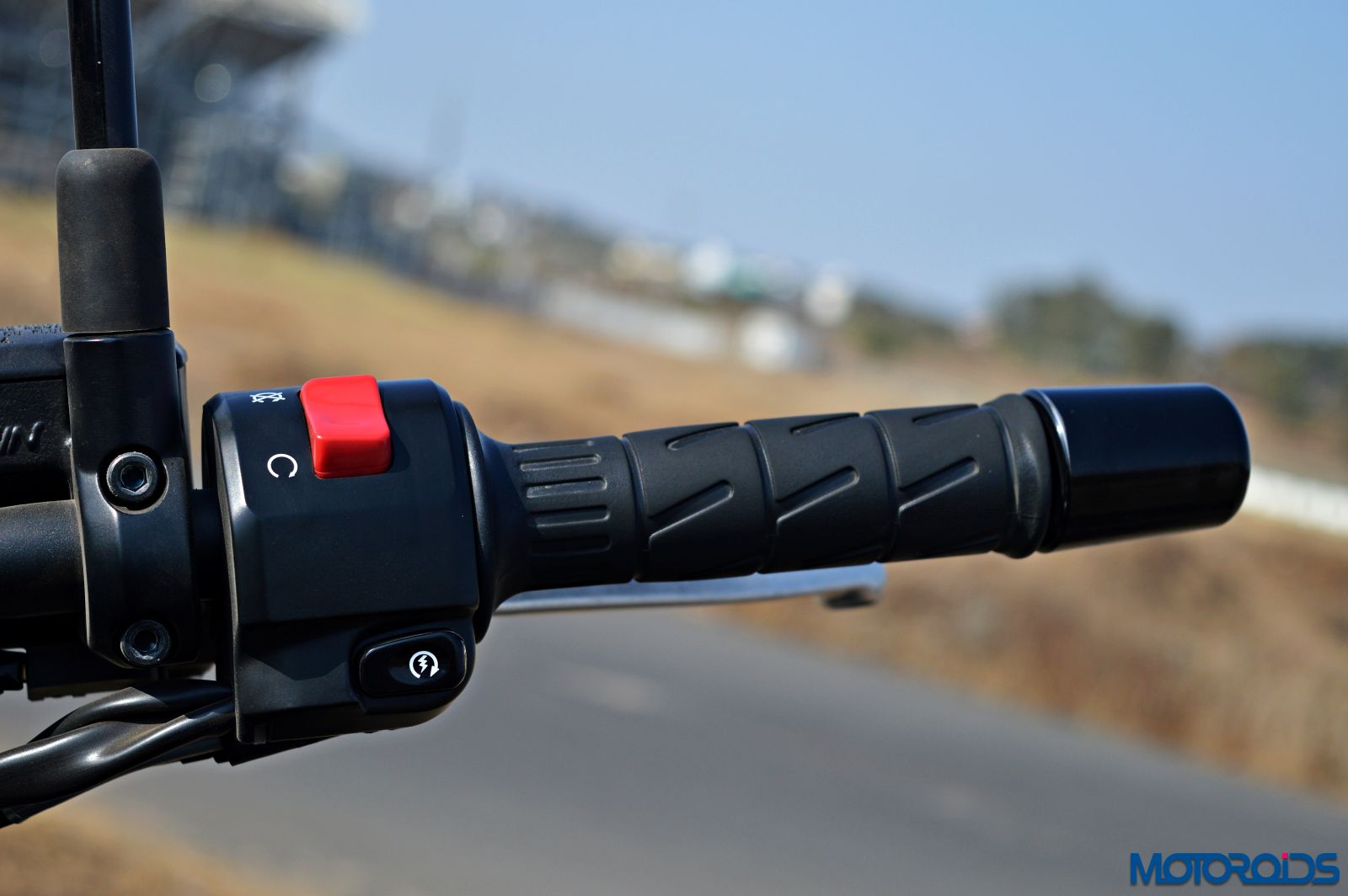 The overall build quality is commendable with nothing to complain about 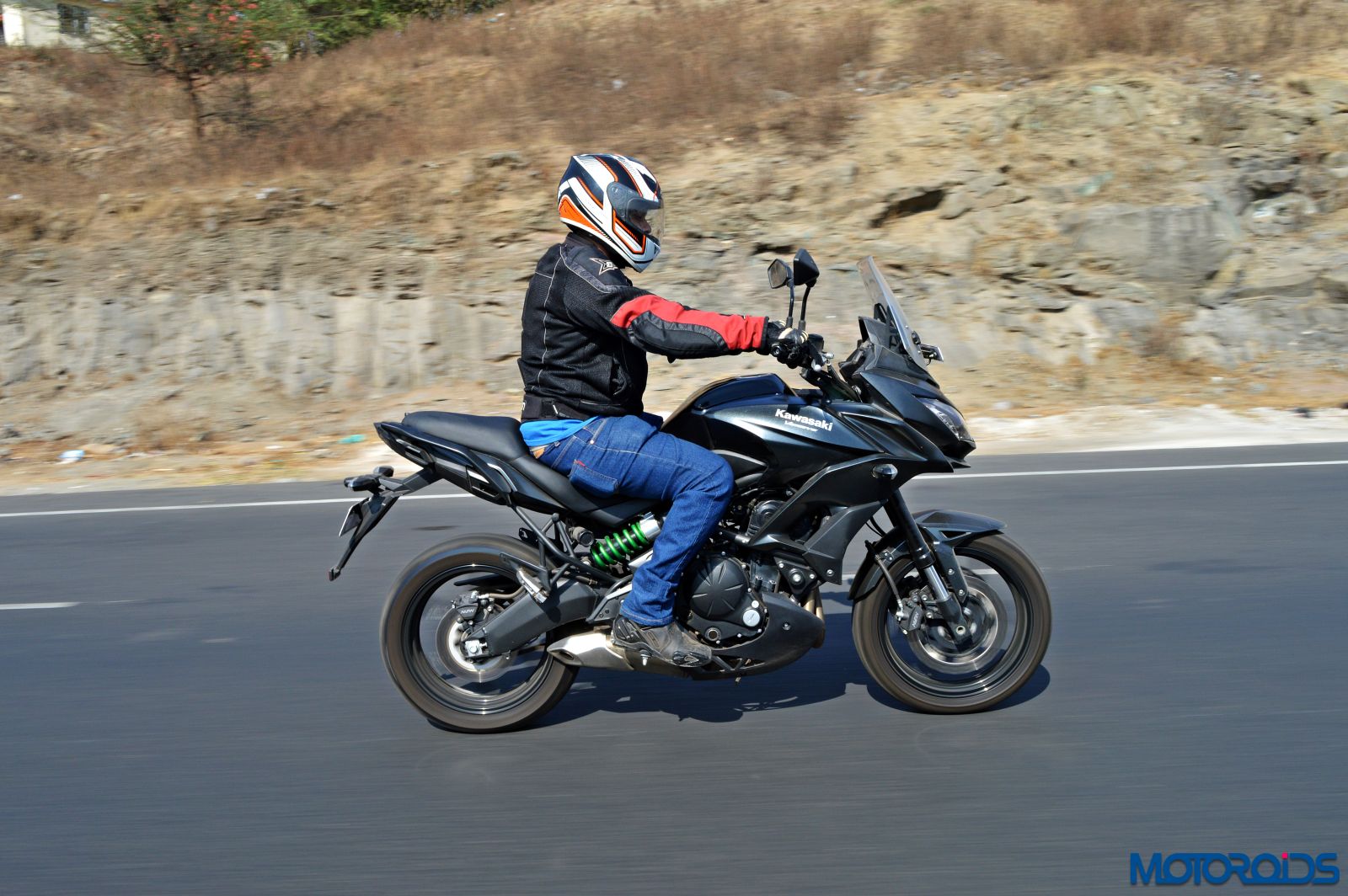 The riding position is upright, comfortable and touring friendly

The Versys 650 is equipped with the same engine that powers the Ninja 650. The motorcycle draws power from the 649cc 4-stroke, 2-cylinder, DOHC, liquid-cooled, parallel twin engine. The bore and stroke, at 83.0mm and 60.0mm respectively, remain identical to the Ninja 650. Even the gearbox and the ratios are identical between the two. What’s different though is the tuning. 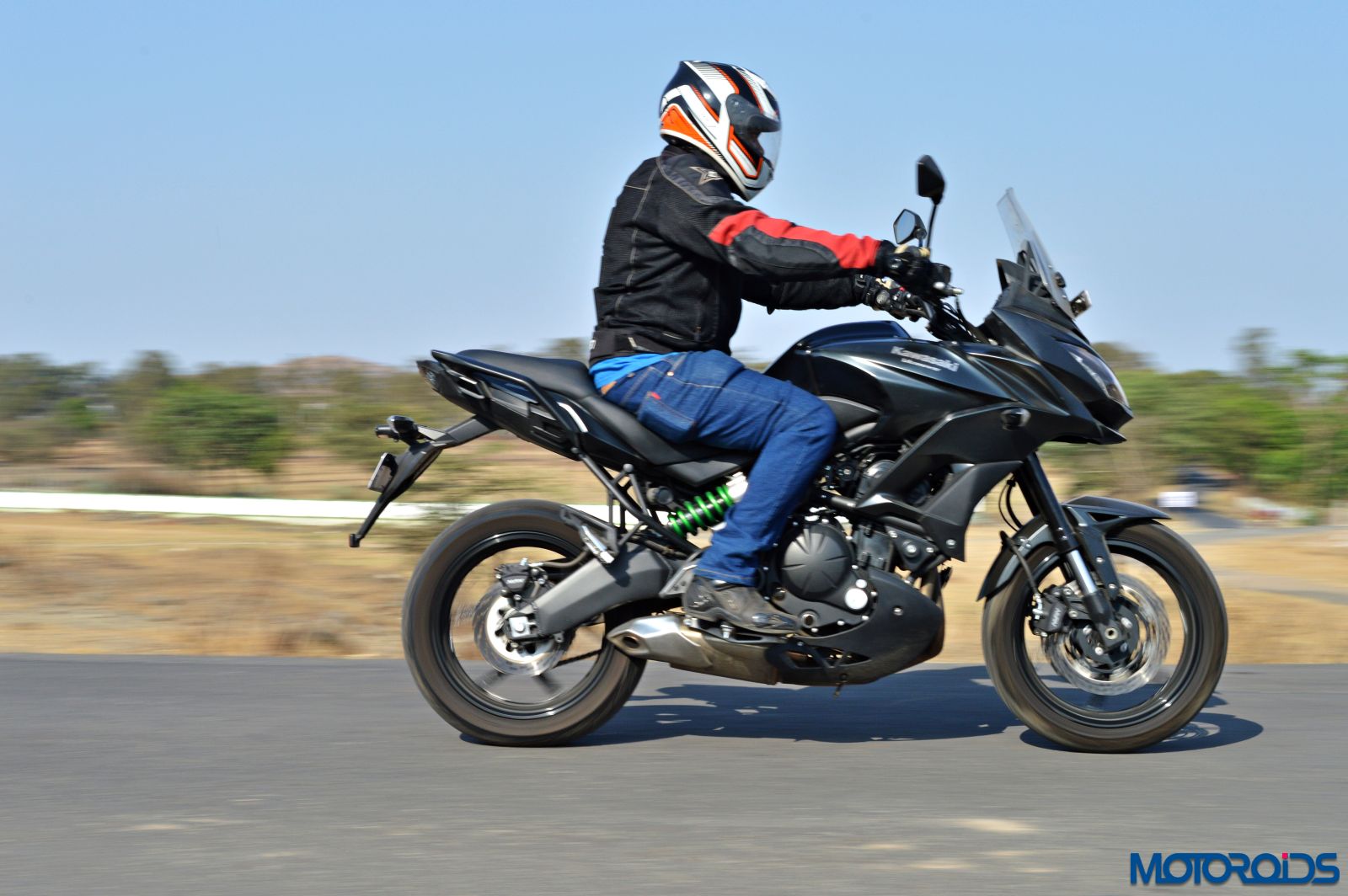 Ride the motorcycle at as low as 2,000 revs in bumper-to-bumper traffic or ride it like you’ve stolen it right till redline at 10,000 and the Versys plays along without a word of protest. The healthy low- and mid-range also allows for is quick overtakes on highways while also making for a fun canyon carving experience, not to mention the refined cruising capabilities for those mile-munching weekends. 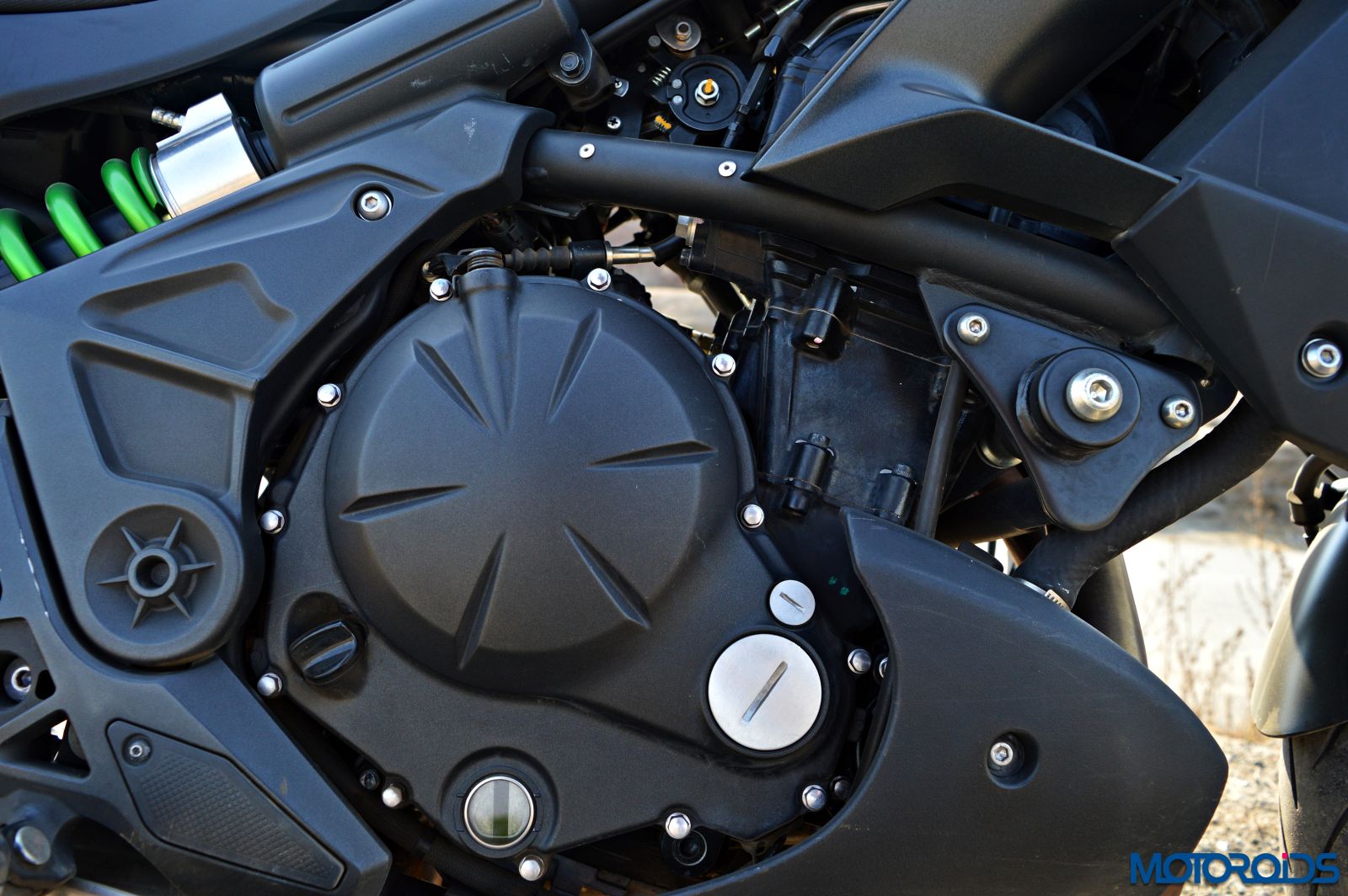 The engine on the 650 is refined and with the Versys, Kawasaki has managed to improve it further. Majority of the credit goes to the rubber mounts which absorb any vibrations, if there are any at all, and offer a pleasant ride experience. I did manage to clock some really good speeds on an empty stretch of tarmac around Pune and the Versys played along well, without any unpleasant vibrations.

It impressed with its braking capabilities as well. Anchors are dropped through dual semi-floating 300 mm petal discs with two calipers upfront and single 250 mm petal disc with single calliper at the rear – both from Nissin. The motorcycle comes with ABS as standard fitment too and that’s where the Versys 650 really outscores the Ninja 650. The front and rear offer strong bite and bring down the digits on that speedometer effectively and quickly. ABS makes the process sufficiently progressive which stops the motorcycle even more efficiently. 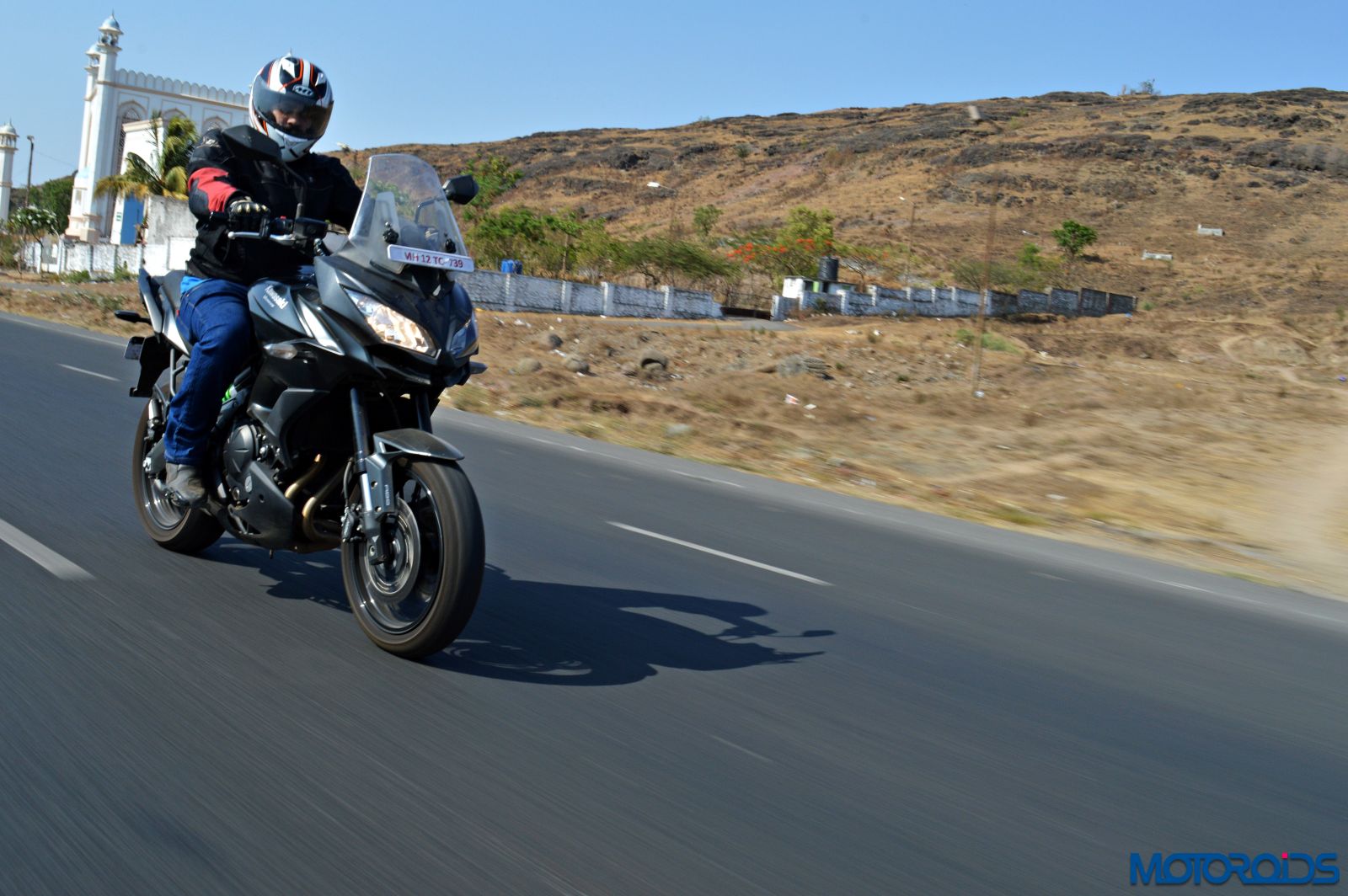 The Versys 650, similar to its 1000cc sibling, is touted as a tourer and the ergonomics have been laid out accordingly. The high-raised handlebar and relatively front set foot rests offer a relaxed and upright riding position while the windshield looks after those air-blasts once you venture out into higher three digit speeds. What would make you hit the gym every week with two days specifically scheduled for leg exercise is the effort it requires to be pushed with feet in the reverse direction. The motorcycle weighs 216 kg (wet). That, along with the 840m seat height, makes it a difficult task to pull the motorcycle back. It feels nimble and lithe, though, once the engine gets fired up and you’ve slotted into a forward-drive cog.

The Ninja 650 was quite a stunner on the twisty roads and the Versys 650 is no different. The wheelbase of the Versys 650 is just 5mm longer than the Ninja 650. The exhaust is closer to the centre of the motorcycle which improves its geometry and offers the motorcycle great handling characteristics. The Dunlop Sportmax tyres were an absolute delight and are a great pair for street use. The mix makes Versys 650 an absolute delight around the twisties. The stock tyres can tackle all the obstructions on Indian roads however, if you intend to go off-road, or probably mark your GPS towards Ladakh, we recommend installing a different set for the job. A pair of knobby should be just right. 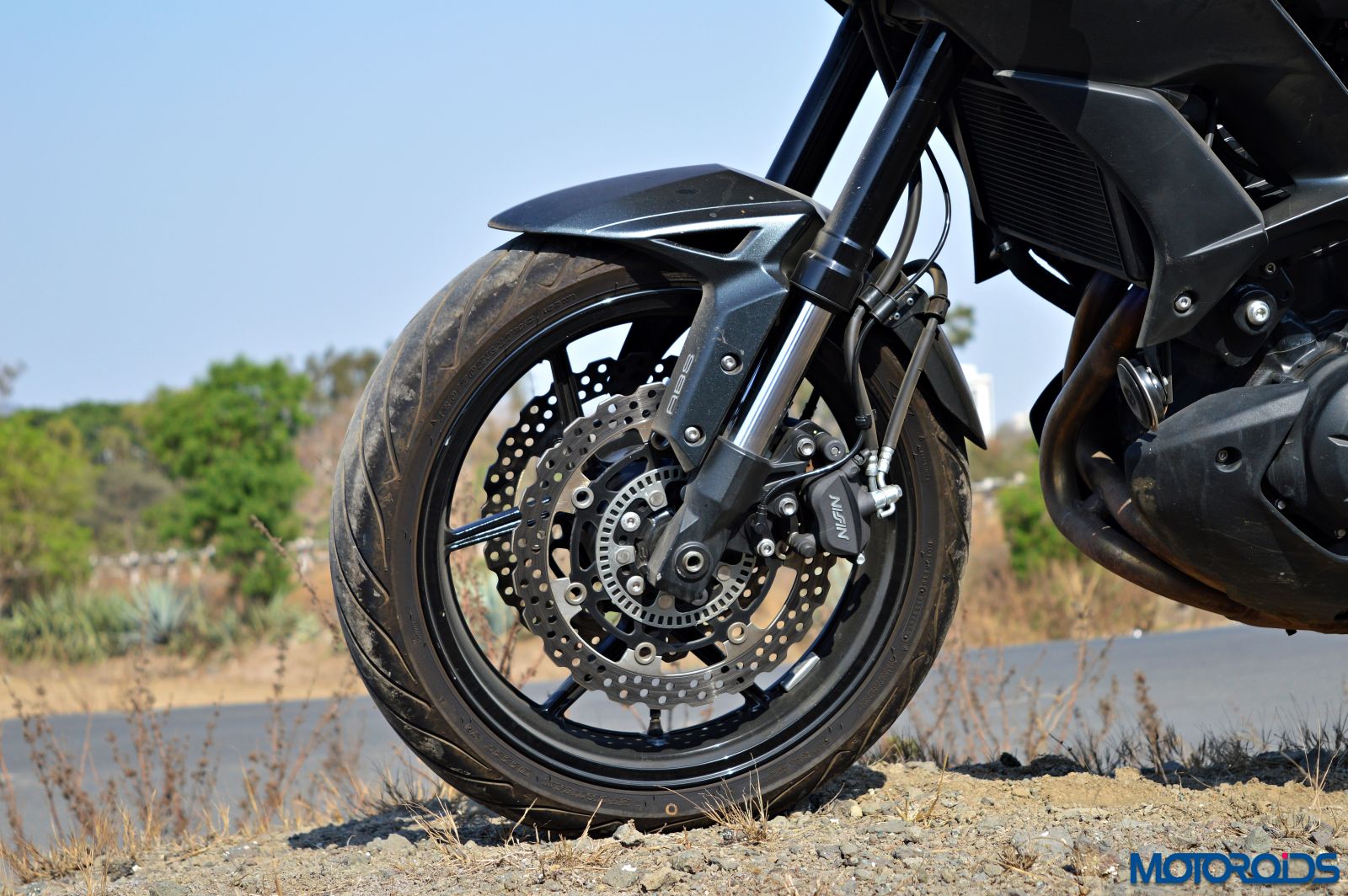 It’s not just the twisties and the arrow straight roads where the Versys 650 impresses. The motorcycle is quite efficient in city’s bumper-to-bumper traffic too. It’s almost unbelievable the ease with which you can sneak your way between the cars for a motorcycle that has such dimensions.

It also takes on broken surfaces with absolutely no remonstration. Soaking up the uneven surfaces are 41 mm inverted telescopic forks upfront and an offset laydown single-shock at the rear. The default setting is slightly on the softer side which is primarily to offer a better ride quality over uneven surfaces. But you can change the mix to suit your requirements. The front suspension gets adjustable rebound damping (right-side) and adjustable preload (left-side) while the rear comes with remote spring preload adjustability. The step-up seat is sufficiently large to accommodate two healthy persons. The seat is well-padded too for your rear to be comfortable on those long hauls. 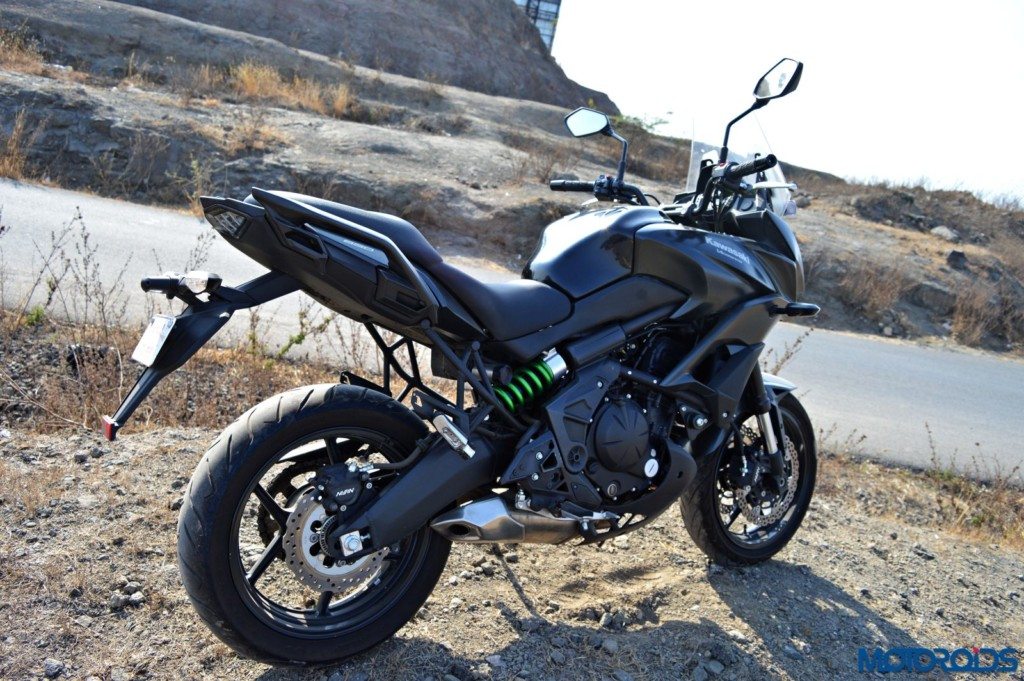 We already told you about the rubber mounts soaking up any vibrations from the engine but in case there were any to leak through, the rubber coated footpegs and bar-end weights would knock them out instantaneously.

Everything is impressive about the motorcycle but what about the price? Is it value for money? 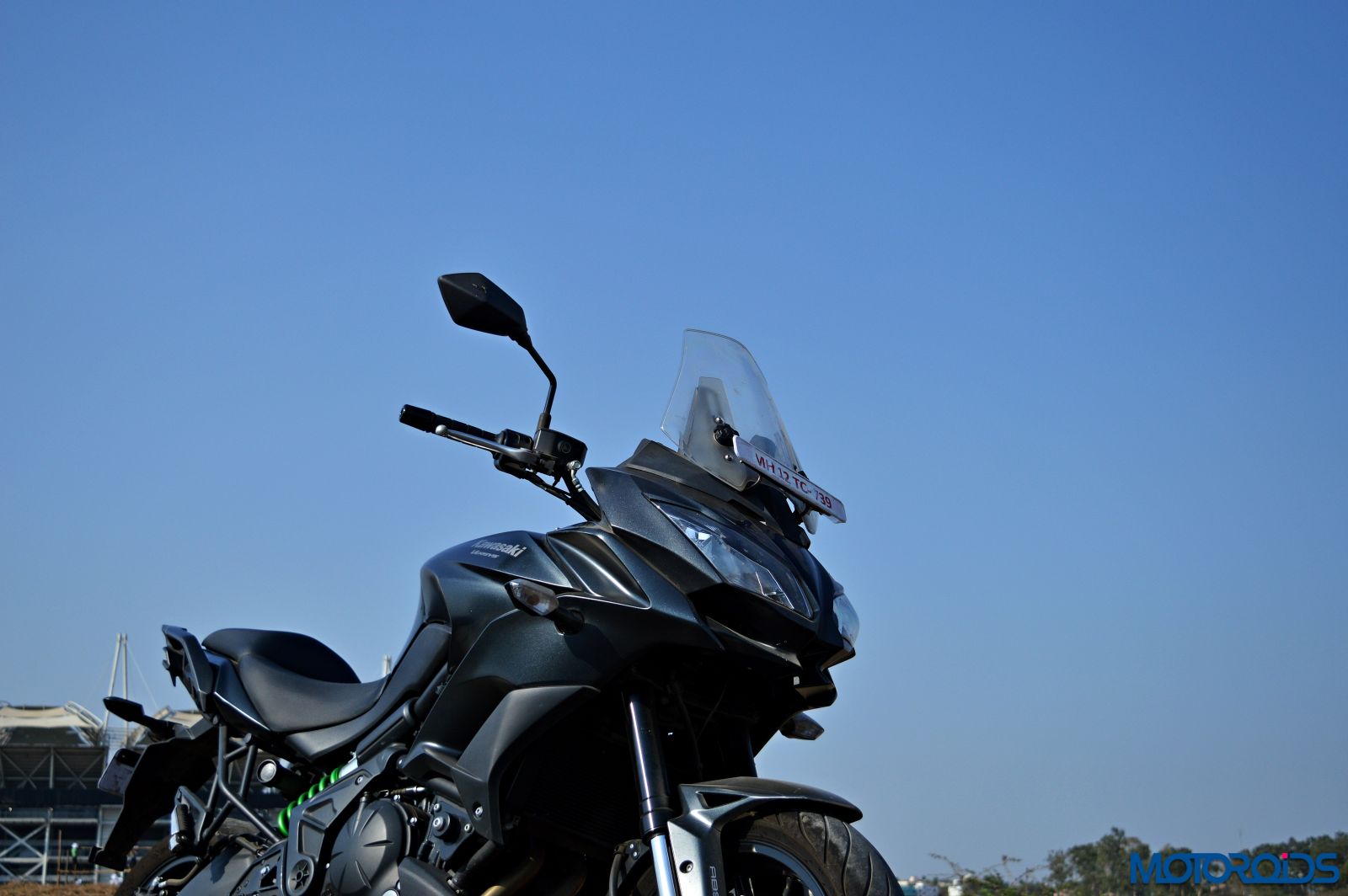 The Kawasaki Versys 650 is probably one motorcycle that I would love have in my garage for its do-it-all nature. It accepts any task thrown at it without a fuss and tackles it with utmost ease. The thoroughly bred engine and the well composed ergonomics make it a potent highway cruiser while the well-spread power band makes it an everyday motorcycle. Braking has been improved by several notches with the addition of ABS and braking feels more confident than the non-ABS Ninja 650 sold in the Indian market.

The Versys 650 isn’t an adventure tourer but strap on those knobby tyres on the motorcycle and it can get off the road for brief intervals. Do not expect it to take you through the wild though. 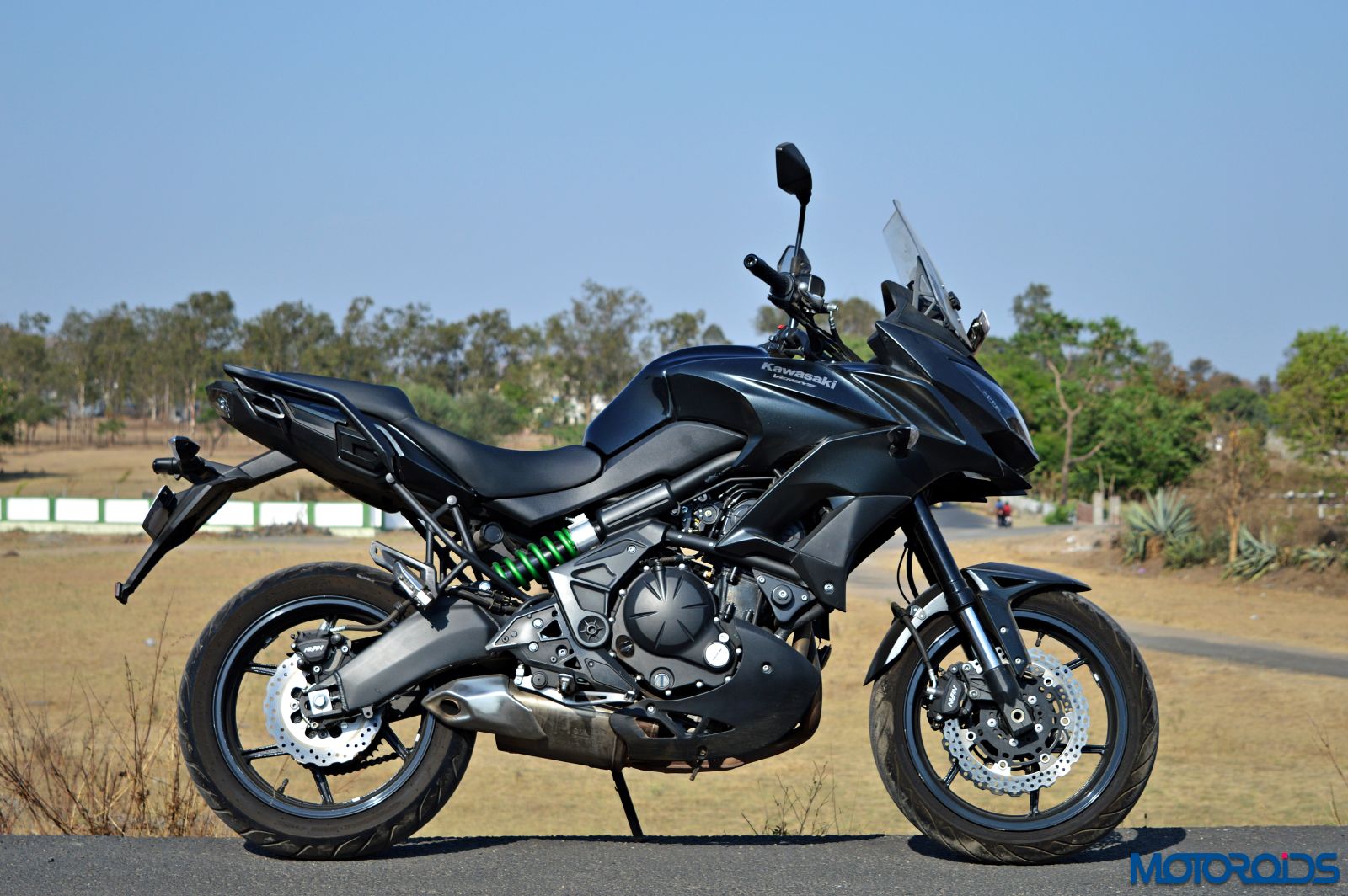 At Rs 6.60 lakh (ex-showroom Delhi), the Kawasaki Versys 650 is probably one of the best motorcycles money can buy in that segment for touring needs. The only drawback is the lack of colour options in the country. While the motorcycle is available various colour choices internationally, Indian touring enthusiasts have to make do with the Metallic Matte Carbon Gray/Metallic Spark Black. Hopefully Kawasaki will introduce more options in days to come, like it did with the er-6n. If you do not care much about the colour, just buy one and set out towards the horizon for a new adventure.

Here is the complete image gallery of the Kawasaki Versys 650 followed by the technical specifications.