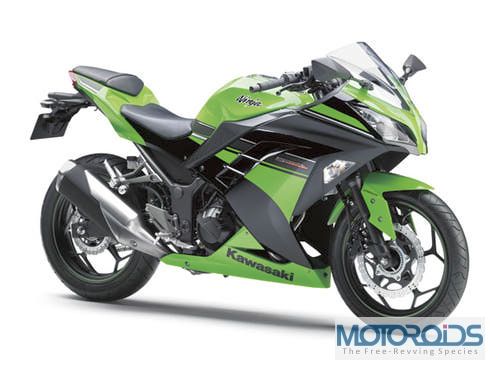 We reported in detail when Japanese motorcycle maker Kawasaki launched the new edition of the popular Ninja 250R quarter litre sports bike. Now, the bike manufacturer is planning to come up with the 2013 Ninja 300R and the Ninja 400R. Both the upcoming bikes sport twin cylinder engine layout and as the names show, the 300R & 400R have engine capacity of 299cc & 399cc respectively. These bikes should debut as soon as in early 2013. The Ninja 300R will be seen pumping out 39 Bhp @11,000 rpm and will also have more torque than the best selling Ninja 250R. The 400R will offer 43 Bhp at as low as 9,500 rpm. Rumors are also doing rounds that the 300R could replace the 250 in the US market. As reflected by the power figures, the Ninja 300R will have a peaky power output and hence, might be a track focussed sportsbike. The 400R though, in all probability, will play a baby sister to the Ninja 650R sports tourer.

The Ninja 300R & 400R will open gates to an all new segment of performance bikes and the new bikes will act as a good bridge between the 250s and the 650s. Better times coming in for bike aficionados. We so wish the new Ninjas come to us. Are you listening Bajaj?