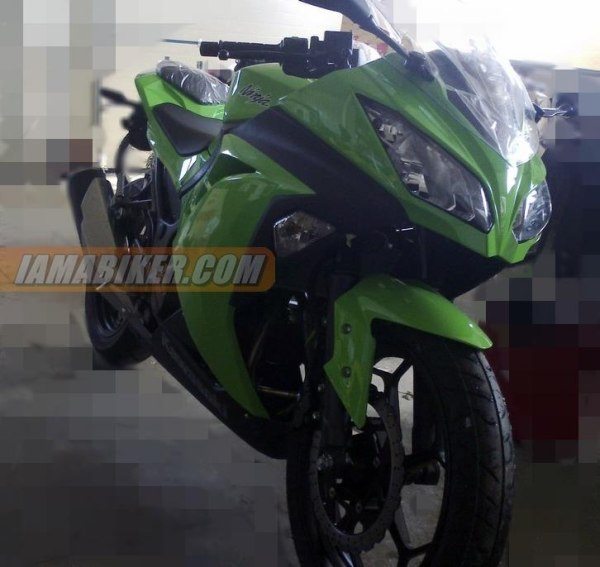 We have been reporting in detail about the much publicized Kawasaki Ninja 300R that was unveiled last year. The latest in the Ninja line up of performance bikes was being said to be a replacement for the 250R. However, it later emerged that the new 300R and the new 250R, which are very similar in looks, will sell alongside each other.

From what the specs tell us, the 300R is a tad more powerful sibling of the 250R and will be a right step forward towards bridging the gap between the 250cc and the 600cc motorcycles. The new Kawasaki Ninja 300R is powered by a 296cc, parallel twin, fuel injected engine with dual throttle valves. The 300R’s motor has a max power output of a healthy 39 PS@11000 RPM and has a peak torque figure of 27 Nm @ 10,000 RPM. Transmission duties are courtesy a 6-speed gearbox and the bike comes with optional ABS. The new Kawasaki Ninja 300R rides on a 110 section tire up front and 140 section tire at the rear.

It is a known fact that the Ninja 300R is coming to India and we reported when a dear friend, who is a reliable source of information, informed us that the new bike was being tested at Vehicle Research and Development Establishment (VRDE). We also got to know when ARAI commenced the tests on the new bike. Finally, we reported when a Kawasaki Ninja test mule was spotted being ridden by an employee of a Bajaj dealership. As if all these weren’t indications enough of the fact that the Ninja 300R is inching closer to its India launch, a Kawasaki Ninja 300R test mule has been spotted in Pune.

All these developments have set us excited and every Indian biking aficionado is surely in for a treat in near future. The Ninja 300R looks poised to open gates to a new segment in Indian bike market and is sure to appeal to those who are looking for that wee bit extra from in entry level sportsbikes.

The new Kawasaki Ninja 300R India Launch is expected to happen in June-July this year.