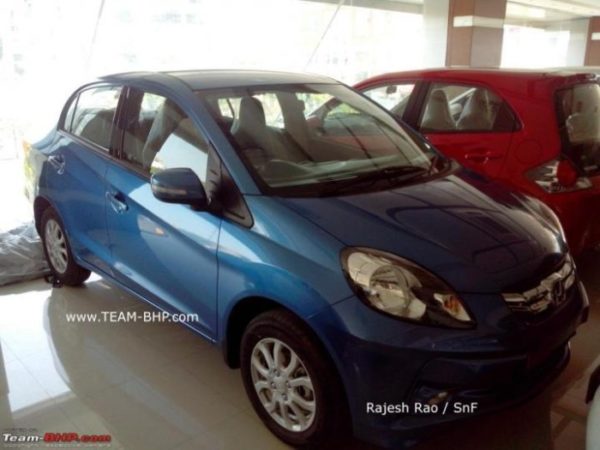 That the Honda Amaze entry level sedan is headed to India is well known news. Regulars here would remember that we recently reported that the Brio based entry level sedan is close to getting launched in the fast developing Indian car market and that the display cars have already been dispatched to Honda Cars India dealerships.

Now, what we have here is the first set of pics of the Amaze at an Indian dealership. The car seen here is the top end VX variant but more on that later.

The Honda Amaze is a really important launch for the Indian subsidiary of Honda. The Amaze is all set to become the cheapest sedan in the Indian line up of Honda cars and will battle it out against the high selling Maruti Suzuki Swift Dzire. More importantly, the Amaze will also become the first Honda car in Indian market to get a diesel engine variant. 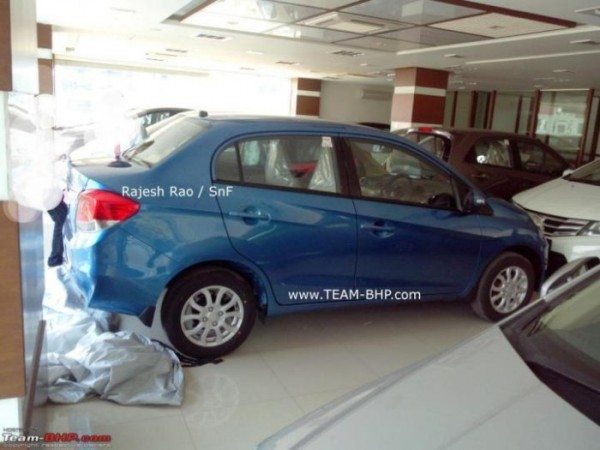 It may be noted that thanks to the lack of diesel engine variants for its cars, Honda Cars India has been fast losing out to rivals and has been seeing a drop in its sales performance since some time. However, the Amaze might very well be the comeback product for Honda Cars India and help the auto maker with recovering the lost ground.

The Honda Amaze measures less than four metres in length. Hence, it qualifies for excise duty benefits and these benefits can safely be expected to be passed on to the buyers thru low purchase price. However, it may be noted that low prices is something that hasn’t really been Honda’s forte.

The diesel variant of the Amaze is powered by a 1.5 litre i-DTEC Earth Dreams diesel engine that is closely related to the much hyped 1.6 litre i-DTEC Earth Dreams diesel motor that is seen in UK spec Civic. This engine, in all probability, will be high on both efficiency and power. The petrol engine for the Amaze is the same 1.2 litres i-VTEC motor that is found powering the the Brio hatchback. 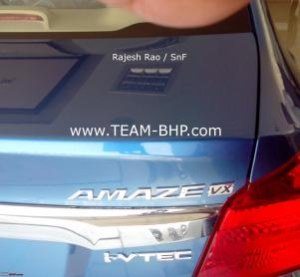 The top end VX trim will be equipped with dual airbags, ABS with EBD, 8 spoke 14” alloy wheels, height adjustable driver’s seat, rear defogger, ORVMs with turn indicators and rear seat arm rest with cup holders. The petrol variant of the new car will offer an option of automatic gearbox. The VX trim level will also be introduced in the Brio hatchback in coming months.

Our guess is that with traditional Honda strengths along with a class leading diesel engine, the Brio Amaze should do amazingly well in the highly competitive lower C segment.