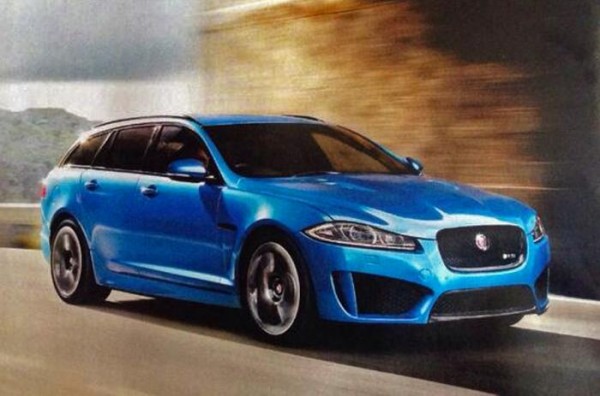 If rumours are to be believed, what we have here is a leaked image of the Jaguar XFR-S Sportbrake, which hit the web sometime back. It is highly probable that the XFR-S Sportbrake would make its public debut at the  Geneva Motor Show next month.

The Jaguar XFR-S Sportbrake would be pitted against the Audi RS6 Avant and Mercedes-Benz E63 AMG Estate and powering the station wagon would be the same supercharged V8 5.0-liter engine that powers the XFR-S sedan. This petrol engine has a max power of 542 bhp, along with a peak torque of 680 Nm, and comes mated to an 8-speed ZF transmission. If company claims are to be believed, the car is capable of hitting 60 mph from standstill in a quick 4.6 seconds, before hitting a top speed of around 180 mph (300 km/h).

As can be seen in this image, the Jaguar XFR-S Sportbrake, much like the sedab sibling, will sport a more aggressive body kit, chunkier mag wheels and a revised front bumper with larger air vents. It is being said that the new Jaguar XFR-S prices could start “just over 80,000 GBP”, which would make it a lot pricier than the “Diesel S Portfolio” variant, the current flagship model, which retails at 52,000 GBP.