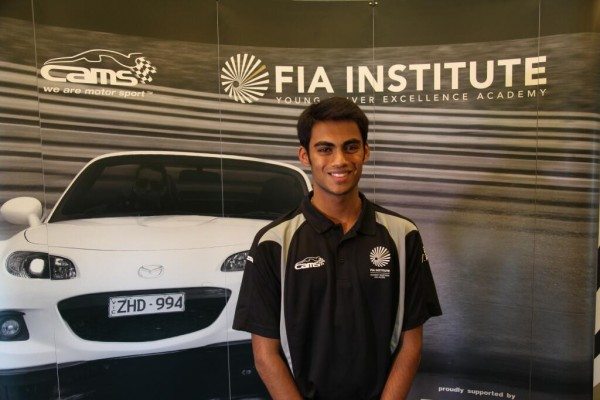 After an intensive three days of tests and evaluations at the FIA Institute Asia-Pacific Selection Event hosted by the Confederation of Australian Motor Sport (CAMS), India’s Akhil Rabindra won himself a place in the FIA Institute Young Drivers Excellence Academy. Rabindra, 17, who races in the JK Racing India Series (Formula BMW) won his place on the fully-funded Academy program after demonstrating his ability not just on the track but also in terms of fitness and understanding of safety and vehicle dynamics.

There were three judges on the selection panel with the Gus Glover from the FIA Institute, Academy Instructor Dr. Tony Turner and Lead Driving Instructor Cameron McConville . In the end it was a tough decision, but all three felt Rabindra was a worthy winner, and he was naturally thrilled to have been chosen with the announcement made by FIA Institute Deputy President Garry Connelly.

“I am honoured to have been selected I would like to thank the FIA Institute, CAMS and my ASN The FMSCI for making this possible. I am looking forward to taking on the other drivers from across the world. The Academy should be great and I hope to lean a lot.” Rabindra said.

Rabindra now has the opportunity to follow in the footsteps of previous participants in the Academy who have gone on to drive in Formula One and the World Rally Championship.

Andrew Papadopoulos, President of CAMS, which hosted the event on behalf of the FIA Institute, congratulated the winner and all those involved.

“It has been fantastic to host this event we would like to thank the New South Wales Institute of Sport and Sydney Motorsport Park and Mazda for their support. Driver development is important in the Asia Pacific region and we are happy to have helped raise the standard in this part of the world.” said Papadopoulos.

FMSCI President Vicky Chandhok commented, “This is a great initiative by the FIA to develop young drivers across the world. On behalf of the FMSCI, I would like to congratulate Akhil on winning the APAC selection, and wish him all the best in the Academy. There are so many young drivers with so much potential that the future of Indian motorsport looks promising.“

On the final day of the selection event the 12 drivers were whittled down to three, Rabindra, Petr Borodin from Kazakhstan and Mark Gibson from New Zealand.

Ultimately, the choice of Rabindra as the regional winner was based not only on the shoot-out result but on all-round skills displayed over the three days.

Beginning in December, the next Academy provides a fully-funded training programme which aims to help drivers develop their motor sport careers, whilst increasing safety skills and actively promoting the principles of safety, fairness and responsibility on and off the track.