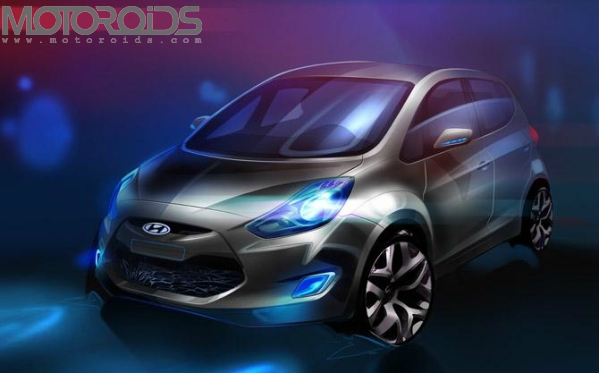 Hyundai is a company which is transforming fast. The design, the engines, the tech, the company, with its fast progress, new age products and unbeatable warranty is giving its global counterparts a hard run for their money. And the latest in the series of the modern weapons that the Korean carmaker has drawn out is the Hyundai ix20 – a B-segment MPV.

You heard it right, a spacious car which wouldn’t stray too far from being a hatch, while still packing in much more space. Doesn’t that remind you of the Maruti Suzuki RIII revealed at the Auto Expo? The positioning of that vehicle is exactly the same as this new Hyundai. The battle between the top two carmakers of the country seems is hotting up!

Hyundai may be calling the ix20 an MPV, but the ix prefix means it belongs to the crossover breed. It’s a sexy looking machine which is the latest adopter of Hyundai’s Fluidic Sculpture design philosophy. The name ix20 reflects the new model’s crossover-like versatility – a vehicle with the ability to simultaneously serve as a functional people-carrier while providing a dynamic, fun-to-drive experience.

The new car will be revealed at the Paris Motor Show, on 30th September. Hyundai will also reveal its new, refurbished i20 with a brand new 1.0-litre engine, better fuel efficiency and much better emissions.

The ix20 has been designed and developed at Hyundai’s European R&D centre in Russelsheim, Germany.  The new car will be launched by the end of 2010