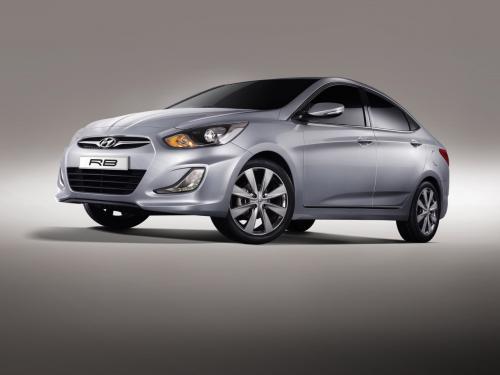 Hyundai have revealed the images and video of their latest offering for the entry level sedan segment – the RB concept. The car was revealed at the Moscow International Motor Show, as it is slated to make its production debut in Russia first.

The RB is the latest generation entry level family sedan from Hyundai with a very strong possibility of hitting the Indian shores. We recently showed you the pictures of the stunning next generation Elantra – the RB sits one or two notches down the pecking order. The bumpers, headlights, grille and bonnet have been redesigned for better appeal. The RB looks production ready in the images and should be available in the Russian showrooms by the end of the first quarter of 2011.

The RB concept is said to share its platform with the i20, and is termed as a repackaged Verna / Accent as well by some. However, that isn’t really the case. As far as our knowledge goes, the existing i20 platform has been thoroughly overhauled to develop the RB as a cost-effective, yet contemporary solution for developing markets like India, Brazil and Russia.

The RB presents to us yet another iteration of Hyundai’s now extremely popular fluidic sculpture design philosophy. The car features a wide-ish looking front, a coupe like profile, harmonious accent lines and a fresh new headlamp which is claimed to have been inspired from an eagle.

The new sub-compact sedan will be available with 1.6-liter or 1.4-liter Gamma petrol engines with an estimated 124 PS / 156 Nm  and 107 PS / 135 Nm respectively. The engines will be mated to a four-speed auto and a five speed manual transmission. The new car will take the fight to the likes of the Ford Fiesta and Suzuki SX-4. Expect an India launch by mid 2011.