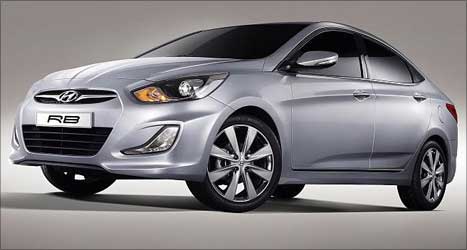 Cricket World Cup fever has got each of us and also Hyundai who is one of the major sponsor of the ICC World Cup in the Asian Mainland. Call it a very clever step of Hyundai India as it has declared that if India wins the World Cup and repeats history, Hyundai India will give each of the members of Team India the all new Hyundai Verna (RB Saloon). Yes this is the same new version we have been tracking since months and also speculated that the car is going to hit the Indian roads due May.  If India wins today not only will they bring back the cup but also will flaunt their new Verna.

Amazing market strategy by Hyundai, there could be no better launch for the car than this one which will be done in the midst of celebration throughout the whole country. “As the official car partner for the ICC Cricket World Cup 2011, we will be extremely delighted to felicitate the Indian cricket team with All-New Verna much ahead of its market launch in the country. This is a part of our continuous effort to bring passion to the game of cricket and we have taken many such initiatives like the Hyundai Fan Park, First and Last ball tour amongst others during the entire world cup campaign. I wish team India all the very best and hope that they realise the dream of the nation to win the world cup.” Is what H W Park, MD and CEO, Hyundai India said.

We at Motoroids pray that team India get the World Cup back home and also their new Hyundai Verna. Tell us what do you think about this strategic move by Hyundai?