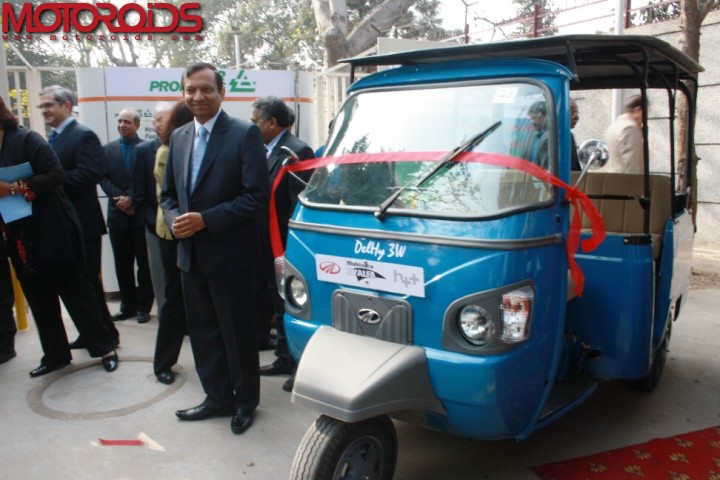 Auto Expo played host to the launch of the world’s first hydrogen fuelled 3-wheeler / rickshaw, namely HyAlpha. The first fleet of these vehicles were launched at the Auto Expo in New Delhi today.  The USD 1 million project has taken three years to complete, with half of the costs co-funded by the United Nations Industrial Development Organization (UNIDO) International Centre for Hydrogen Energy Technologies (UNIDO-ICHET) based in Istanbul, Turkey. IIT Delhi was also involved in the development of the new three-wheeler.

The vehicle developed by Mahindra & Mahindra will be refuelled from a station set up by Air Products Inc. USA at Delhi’s Pragati Maidan, where the fleet will be operating.  The project called DelHy 3W fosters the implementation of Indian sci¬entific and industrial skills in producing a very popular mass transport platform to operate with the cleanest fuel. The Indian Institute of Technology, Delhi (IITD) was the DELHY-3W project co-ordinator, carrying out exhaustive laboratory tests on the vehicular engine under varying operating condition and providing the technical expertise to convert the internal combustion engines to run on hydrogen.

The aim of this project is to convert vehicles so that they can carry and use hydrogen – a carbon free fuel and thus remove all pollutants. Pollutants such as car¬bon monoxide, carbon dioxide, oxides of sulphur and particulates are totally absent while fuel consumption is substantially lower as compared to gasoline with 1 kg of hydrogen giving around 80 km of mileage. 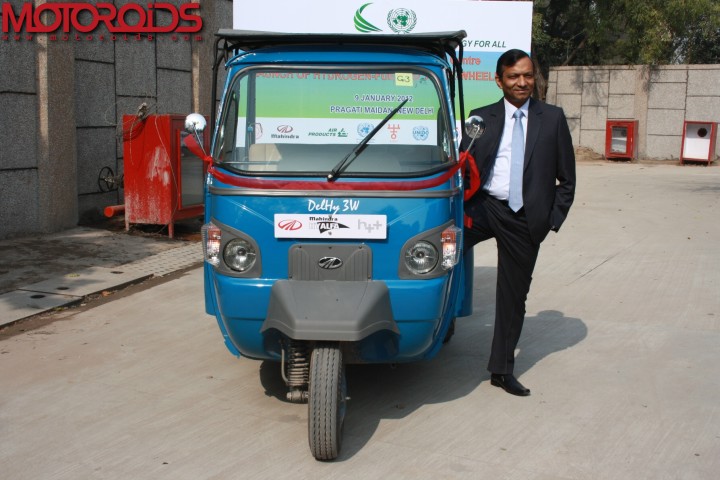 Speaking on the occasion of the launch of the HyAlfa fleet of vehicles, Dr. Pawan Goenka, President, Automotive and Farm Equipment Sectors, Mahindra & Mahindra said, “As part of its mobility initiatives, Mahindra has aimed at providing alternative fuel technology solutions and the HyAlfa is another step towards it. We have prepared 15 vehicles for integration of the optimised engine, storage system, fuelling system and safety features for this hydrogen fuel enabled vehicle”.