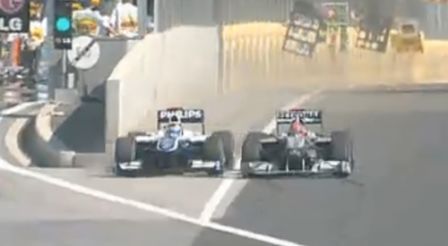 Michael Schumacher hasn’t had the best of season on-track. However, on-track he seems to be doing just fine. Penalties and controversies have always been a part of his career and it is not surprising that he’s been in the midst of a few even in his comeback year.

Schumacher’s return with the Mercedes Grand Prix team hasn’t gone as per plan. Blame the driver or blame the car, the results haven’t been there for anyone to see. The pace has appeared, but in glimpses but nothing that reminds fans of the menacing pace the German legend showed during his 7 F1 titles.

The 2010 Hungarian Grand Prix too didn’t start off too well. Schumacher struggled to get past Q2 in Saturday’s qualifying and only managed P14 on the starting grid. While he had an uneventful race, he ensured that he increased Formula1’s entertainment quotient towards the end of the race.

After his first and only pit-stop, Schumacher was left with a set of hard tyres that were way beyond their prime. His laptimes were reducing and he was being caught up the Williams of Rubens Barrichello at nearly 2 seconds a lap.

The two most experienced drivers in Formula1 were engaged in a good battle for the 10th place and also the last championship point. Their duel was an example of some classic Formula1 racing! Till Schumacher did what probably most of us expected him to do!

Barrichello’s only chance to over-take Schumacher was at the end of the main straight, by out braking him into the first corner. An otherwise precise Schumacher committed an error at the exit of the last corner hence allowing Barrichello to close up further.

In an attempt to defend his line, Schumacher chose to squeeze Rubens on the pit wall – and squeeze he did. There was barely any room for Barrichello to make a move, but move he did! While it all seemed spectacular on television, a second look at the replays would make one believe otherwise.

Schumacher’s desperation to hold his 10th place was way too obvious and he took it a step too far and a tad too close to the pit wall. Had there been slight misjudgement on any of their part, the consequences would have been disastrous. With the top management of all teams sitting up on the concrete pit wall and with the safety marshalls positioned at the end of the pit lane an accident on the pit wall would have been most dangerous.

As an immediate reaction post-race, the Stewards have awarded Michael Schumacher a 10 place grid penalty for the next race in Spa. While many in the Paddock were hoping for a one race ban, it is time that Schumacher mends his annoying ways on track and realizes that safety is what comes first in Formula1!