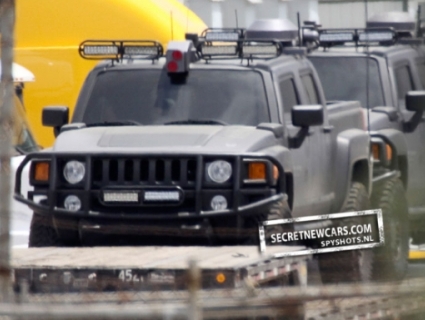 The Hummer brand is dead since over an year now. However, the iconic SUVs are now making a comeback for all their fans, though on the silver screen. Apart from the Ferrari 458 Italia and the revised Camaro, Transformers 3 will also features the Hummer SUVs. These won’t be the regular Hummers that the brand went defunct with. Instead what they have in store for Transformers 3 are customised versions of the H3T and Hx concepts that GM had shown at various auto shows. The Hummers will act as the vehicles for ‘NEST’ which is the fictional organisation consisting of U.S Military forces and Autobots. So we aren’t really sure if these bulky SUVs will transform into hi-tec robots like the rest of the famed vehicles in the flick…

The blokes at SecretNewCars have caught the Transformers 3 Hummers on set: