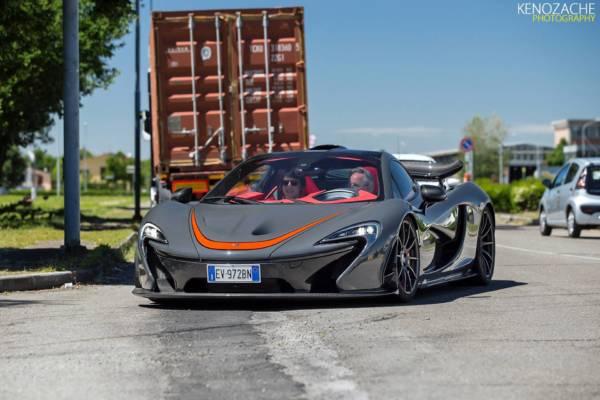 Sometimes, you’ve got to give it to the technological tour de force that the McLaren P1 hyper car is. Dynamic stereotypes have been shattered. In a testament to the respect it has garnered in the stratospheric realm of hypercars, Pagani boss Horacio Pagani was recently spotted driving around in one, possibly for benchmarking purposes. However, back in 2103 at the Geneva Motor Show when the P1 was unveiled, Horacio Pagani had mentioned his mild distaste, since the whole philosophy of the P1 centers around delivering outstanding performance clinically, albeit with a lack of soul or emotion as Mr. Pagani likes it.

Ace photographer Keno Zache captured this moment showing Mr. Pagani pottering around in what it said to be the only Italian registered P1. What’s more special is the fact that this particular example has been customized by McLaren’s in house MSO division (McLaren Special Operations). Finished in grey with orange detailing and red interiors, this P1 certainly looks the part. It’s unsure whether Mr.Pagani was just enjoying a joyride or indeed benchmarking the car for an upcoming faster, track focused Huayra.

To be called the Huayra Nurburgring Edition, expect a limited production run of just 15 to 20 units. All of them will enjoy judicious use of more carbon fiber, a stripped out cabin and other weight-saving measures. Output of the AMG sourced V12 6.0-liter twin-turbo engine will likely be taken beyond the current 710 PS (522 kW) and 1,000 Nm (737 lb-ft) level.

Back to the MSO’d P1,this particular car was recently spotted in Monaco. Check out the gallery below for more images of same the McLaren P1 MSO via Autogespot.