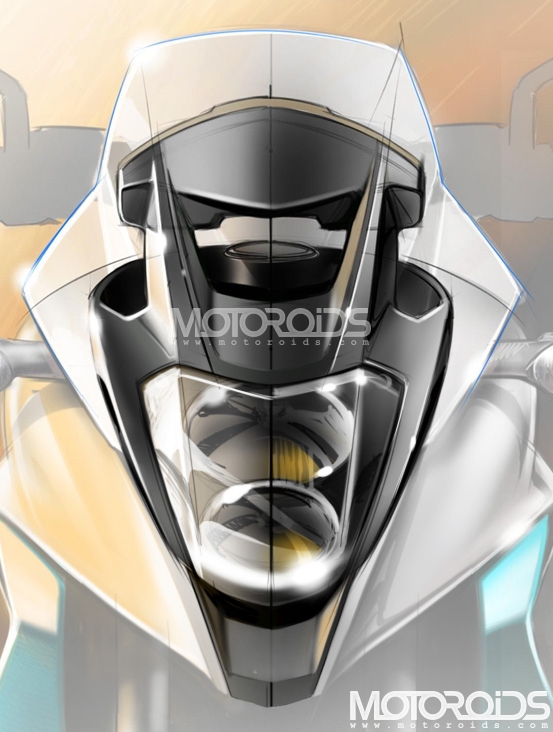 Last week, we brought you the first official teaser sketch released by Honda of its much awaited VFR800X, a Adventure Sports machine, which revealed the side profile of the new tourer. This week, however, Honda has released another teaser image, this time to the close up drawing of the front headlight. From the latest images, the VFR800X seems to have a more chiseled and leaner look than the bulbous V4 VFR1200F. The 800cc V4 Adventure Tourer bike along with other seven new models coming from Honda will be revealed at the upcoming Milan Show in two weeks. And as usual, Motoroids will keep you up to date with the latest in the auto world.

The image shows the front face of the motorcycle, with a fairing design that improves high speed stability as well as engine cooling; and an innovative ‘floating’ instrument panel to put the gauges in the rider’s field of vision for improves safety.

This crossover is a midrange capacity motorcycle – Honda will also reveal at EICMA a new concept motorcycle using the 1200cc V4 engine first seen in the VFR1200F, to further prove leadership in this evocative and powerful  engine configuration.

This mid-range machine is an exciting new approach – a crossover machine that represents the best aspects of two separate biking genres.  It will have the flexibility and exciting attitude of a Naked performance machine, with the upright riding position and rugged appearance of an adventure bike.

This mid-range machine is an exciting new approach – a crossover machine that represents the best aspects of two separate biking genres.  It will have the flexibility and exciting attitude of a Naked performance machine, with the more comfortable upright riding position and design cues inspired by adventure bikes.

With the low centre of gravity of a performance bike it is great fun to ride, and because of its wide handlebars and upright riding position it is both easy to manoeuvre and comfortable .

Honda research had revealed that customers want a machine that has both a unique style and is also fun to ride in all conditions throughout the year. Honda has delivered this customer request.

The final production motorcycle will be shown for the first time at the EICMA show in Milan from 2nd November 2010, when pictures, the date for production and date of availability in dealer will be revealed.