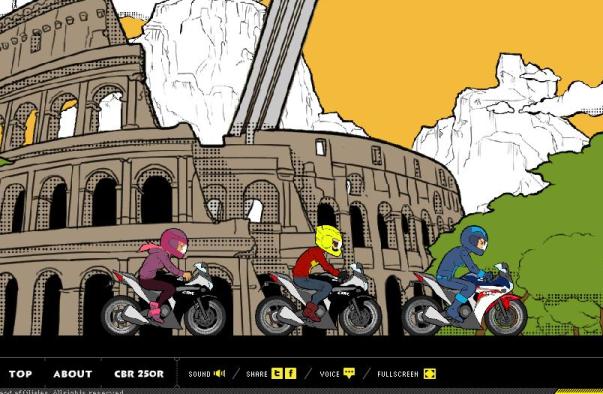 Honda has introduced a flash game (if you could really call it that) to promote the recently unveiled CBR250R. There’s nothing much that you have to do except, hop on to an animated CBR bike. The rest of the story is about travelling across the world with representative sceneries of various countries changing continuously. The game is about touring the whole world on a CBR 250R. There isn’t much action in the game except a few other riders passing you every now and then (no, you cannot even race them). However, the visuals and the music has been meticulously done and it’s quite interesting to watch the visual summaries of 22 different countries passing by so quickly. For those of you who may be interested, India is also one of the 22 countries on the list. We are represented in the game by a tiger and music which very clear has hints of sitar in it.

You have to unravel as many as 22 countries en route your journey on the CBR250R. Have a look, by clicking here, it’s quite interesting.