Home Honda Honda Civic with 1.6 Litre i-DTEC Engine to be Showcased at Paris 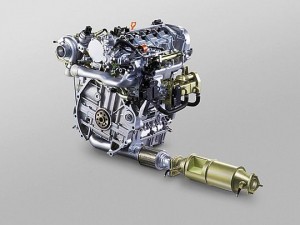 We reported with a heavy heart when it emerged that Honda plans to soon discontinue selling the Civic sedan. Thanks to our car market seeing a shift towards cars running on diesel, sales of petrol engined cars have been nothing short of being dismal. Car makers like Honda, who don’t have an oil burner to plonk into their cars, have been suffering since some time now and are putting in efforts to find a diesel motor for their vehicles. Honda Civic, which is a CBU import, has been losing out on sales and the condition is so bad that Honda feels that the volumes that the car has been doing doesn’t justify the costs of import.

The only hope that we have got is that Honda might decide to re-launch the Civic with the 1.6 Litre i-DTEC turbo diesel engine that was recently showcased in Japan. Developed under the much publicised EarthDreams technology, the new motor looks all set to power the Euro spec 2012 Civic hatchback. The Diesel version of Civic hatchback will be unveiled at the upcoming Paris Motor Show.

The 1.6 Liter i-DTEC diesel engine produces a max. power output of 120Bhp and a peak torque of 300 Nm. The motor should be highly fuel efficient and have low CO2 emissions. Many industry insiders feel that their new Diesel engine isn’t suitable to run on lower quality of Diesel that we have in our country. However, we feel that there is nothing that can’t be cured with re-tuning the motor.

It is almost for sure that Honda India will be launching their diesel engines sooner than later and with the news of Civic Diesel soon making its world debut, we have started hoping that a Diesel version of Civic sedan might soon come to us.