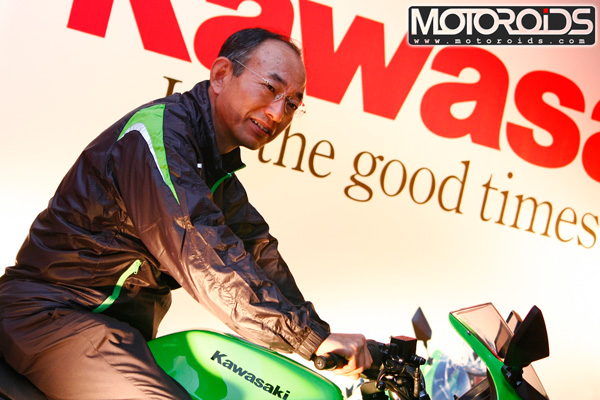 Amidst all the speeches and trying our best to yawn within the perimeter of our mouths, one statement made by Mr. Tanigawa, MD IKM, at the India Kawasaki Motors launch function on Saturday, brought a big grin on our faces. He implied that the Kawasaki Ninja 250R won’t be threatened by the Honda CBR250R which was recently unveiled. Both these bikes will have totally different following and therefore they are not competing against each other. His emphasis lied on the fact that the Ninja 250R uses a parallel twin engine as opposed to Honda’s single cylinder and hence the customers wanting an entry level performance machine would automatically opt for the Ninja 250R over the Honda CBR250R.

Of course, they are two different bikes, one is Honda (!) and the other is hmm, Kawasaki. But apart from the obvious difference what is intriguing is the ‘following’ part. Though the Ninja 250R, had everything a biker would dream of in an entry level performance bike, when it was freshly launched in the country last year; there is every reason to believe that with the launch of Honda 250, the equation in a bikers head is bound to change. Yeah, for a brand loyalist, the stick will always be stuck in the arse. That’s a given. But for an average Joe or Jane, now there is a Honda and hopefully, a Bajaj 250 too. In fact, Mr. Eric Vas, President (New Projects) at Bajaj, clearly stated that just plonking a full fairing on a single cylinder machine doesn’t necessarily make it a hardcore performance machine. We agree, the Karizma ZMR being the prime example. Mr. Vas further stated that as pointed out by Mr. Tanigawa, Kawasaki would not be affected largely by the Honda 250. However, Bajaj would definitely work in the direction of competing with the new Honda, as the single cylinder premium bike market is their primary target – indirectly confirming that a 250cc contender from Bajaj is on its way!

Having said that, the shift in preferences will largely be dependent on the pricing of the Honda 250. God forbid, if Honda takes out its brain and gives it to Santa Claus and dare to launch the single engine 250 bike at a price tag lesser but closer to the Ninja 250 parallel engine; it will be suicidal.