Home News Honda CBR 250R to get Pearl Heron Blue triple tone color in Feb-end. To be dearer by Rs.1500 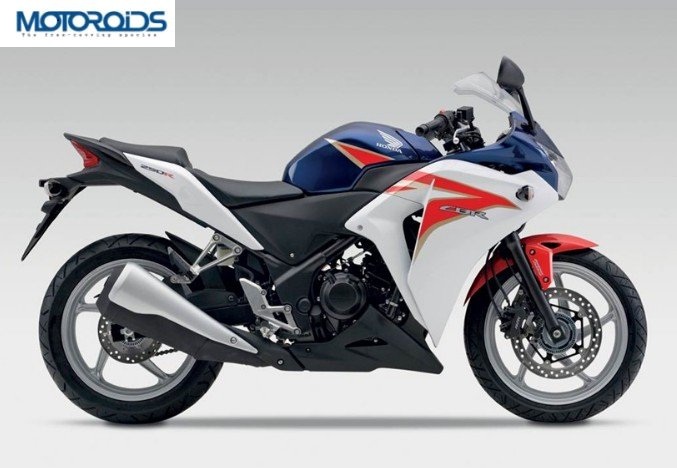 Indian premium motorcycles segment is surely getting hotter. Only a few days back, we were the first auto website (and still are the first) to come up with a complete first ride impression of the upcoming Pulsar 200NS. That is not all as we also pitted the 220 against the 200 and tried to rightfully judge if 200NS is a worthy upgrade from the 220F. Now, the bike that is really looking for a tough future ahead has to be the Honda CBR250R. The recently launched KTM 200 Duke will not be the only one to eat into CBR’s sales, what with the news of the new Comet soon coming to us. Honda Motorcycles & Scooters India (HMSI) has been busy working on its flagship Indian bike and is all set to come up with a a new tri color tone on CBR 250R model as soon as in month-end. It may be noted that this new version, billed as the 2012 edition, was present at the recently held Delhi Auto Expo.

A report on this subject in Business Line quoted Naresh Rattan, vice-president, sales and marketing, HMSI as saying, “The new bike has gone under production in the middle of this month.” The motorcycle manufacturing is already witnessing a dip in the demand for the CBR 250R and as less as 140 units of the baby CBR were sold in January.”There is no dearth of demand for premium priced bikes in India despite a broader slowdown in demand for the commuter bikes witnessed by a few players,” Rattan noted. “The market is growing rapidly even is such times.“

The Indian wing of the company is surely having a few glitches with the components supplies that come from Thailand. “There have been issues relating to components shortage due to the recent floods in Thailand which has impacted local production,” revealed Rattan. “This matter is being sorted out before we launch the new version.“

We expect that the upcoming version of the bike will come with no quality control issues. Now, the new version will be dearer by 1500 bucks and it remains to be seen if merely a paintjob can push the sales of the bike. What can really turn tables in favor of the Honda is the upcoming CBR150R that will be priced at INR 1.15 lakhs. But another story for another time. Watch out for the space!